Now you see it, now you don't

When I browsed through some of the photos I took last week at Homerton I noticed that this little fellow suddenly acquired antennae - in a series of about ten photos the first five have no antennae and the last five there they are clear as day. What was going on? So I did a bit of reading.

It's a Paropsine Leaf Beetle Paropsis sp., one of the Chrysomelidae family, relatively common leaf-eating beetles. They feed on Mytaceae species, mostly eucalypts.

One of the characteristics of the Paropsids is that they can withdraw their legs and antennae from predators while sitting on a leaf. That's what I had inadvertently captured in the photo sequence. You can just see the tip of an antennae in the first photo.

Another characteristic is that they are extremely poisonous if eaten but I don't suppose I'll ever eat one so I'm not very worried. 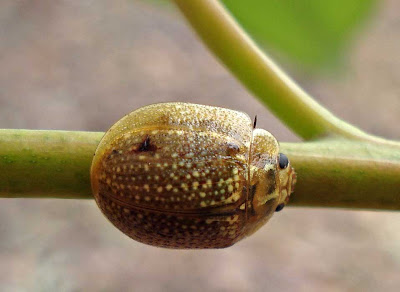 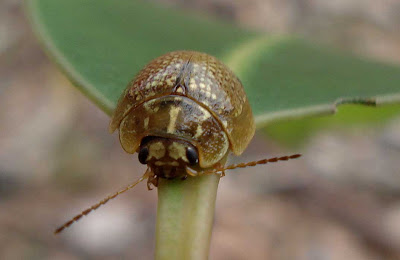 Email ThisBlogThis!Share to TwitterShare to FacebookShare to Pinterest
Labels: beetle

On the way home from market?

I'm not sure what's going on here. This insect was moving very quickly along the branch carrying something like a caterpillar. I wondered if it was caught on its proboscis rather than held. And where was it taking it if it was intentional? The second photo is not very clear but it shows the 'prey' more clearly (as well as the beautiful colouring, and knobby bits on the 'shoulder' area). Is it some sort of weevil? 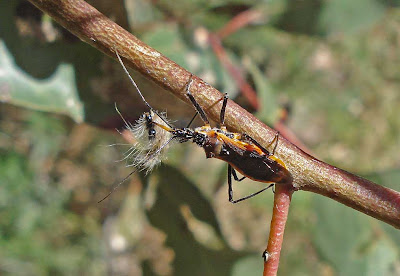 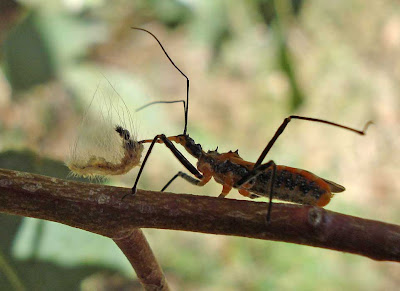 Email ThisBlogThis!Share to TwitterShare to FacebookShare to Pinterest
Labels: insects 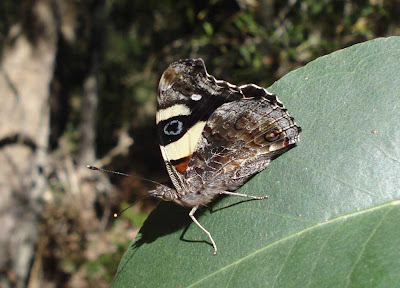 To quote from my Braby*, the Yellow Admiral butterflies Vanessa itea 'fly rapidly and frequently settle, with head directed downwards and wings outspread or closed, on leaves or tree-trunks'. Which is exactly what the one I photographed is doing. I think this is a female.
Aren't reference books great?

Email ThisBlogThis!Share to TwitterShare to FacebookShare to Pinterest
Labels: butterfly

I've almost forgotten how to do this - it's been so long since I last posted. And to make it worse I haven't even had time to read all my favourite blogs. But I think I'm almost back to my normal routine and catching up on all that has happened in blogworld over the last few weeks.

Today I did something I've never done before - I was asked to deliver a eulogy at a friend's funeral. That really took me out of my comfort zone, but I've discovered that when you mean what you say it's really quite easy. Ev had lived a long and good life. We laughed a lot during her funeral service because she had brought joy to the lives of many others. Death is a part of living unfortunately.

I was reminded of this when we visited our bush bock last week. The leaves on nearly every eucalyptus tree I looked at were severely damaged, and I was getting a bit worked up about the fact that they didn't look perfect. Then I started looking for what was actually doing the damage, and found lots of caterpillars, beetles and insects having a wonderful time eating their way to maturity. And the birds were having a wonderful time gleaning their supper as well. I've never seen so many White-naped Honeyeaters in the Manna Gum near the house. So the biodiversity in my environment was clearly evident and I got my camera out to record some of the nibblers. I've got no idea what they are. 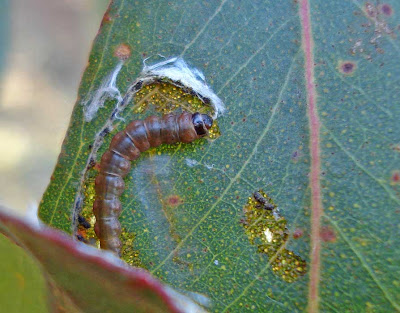 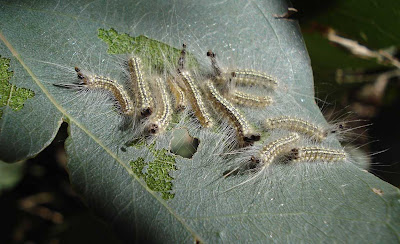 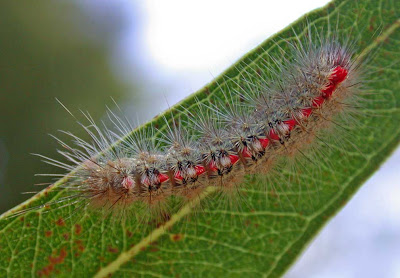 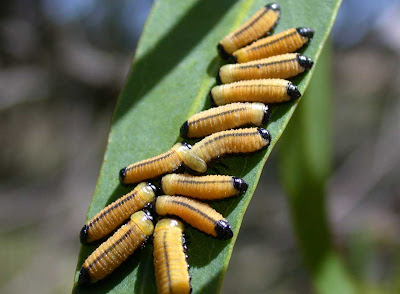 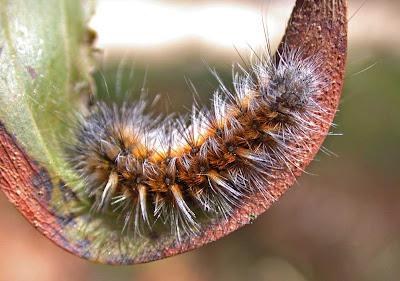 Email ThisBlogThis!Share to TwitterShare to FacebookShare to Pinterest
Labels: caterpillars

I'm a frustrated naturalist at the moment because I have to go to work. There's a big world out there to explore but work to be done. At least there is the thought that it's a temporary situation, a big advantage of casual work.
A walk at lunch time helps. The lakes at the back of the university are surrounded by a walking track that few people use and that's where I head most days, just as I used to when I was at the campus more often. As is the case when you frequently repeat a particular route I expect to see certain things - plants flowering seasonally, water levels going up and down, particular species of birds - but I must admit that I was surprised yesterday to find the Australasian Grebes nesting in exactly the same place as in previous years. Why that particular square metre of the dam? And then I walked a bit further and looked for the pair of Black-fronted Dotterels that fed on the muddy edge there in the past ... and there they were. It made my day.
Posted by Boobook on Saturday, November 08, 2008 4 comments: