At Bridgwater on Loddon there is an experiment happening. These dishes of curved mirrors focus sunlight on to photovoltaic cells. You can read more about it here. These are the views from the road but it would be good to see them up close. I wonder if they ever have open days.

It's a pity that here in Australia the renewable energy target keeps changing - how can people invest in the technology and research with confidence? 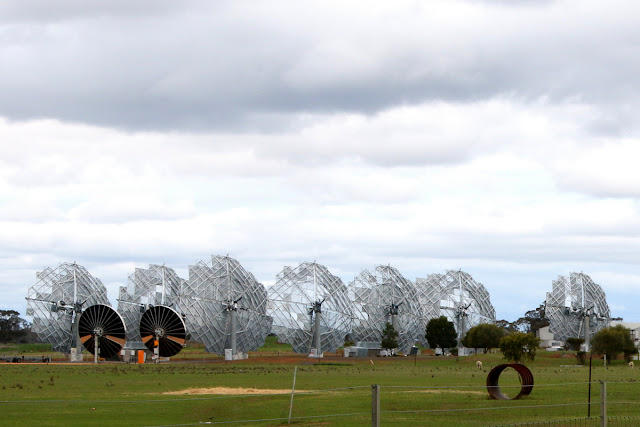 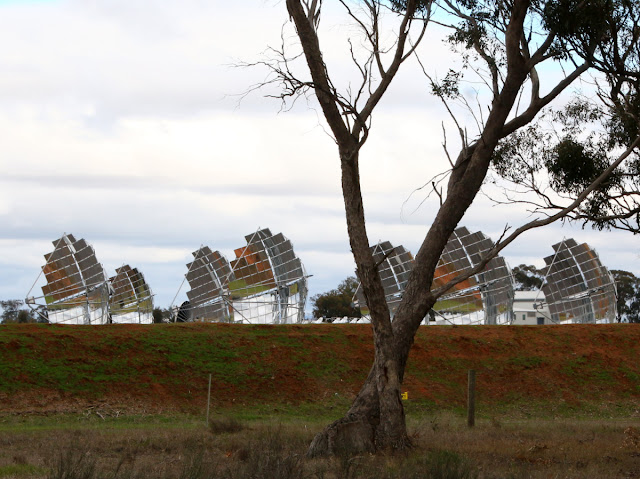 Around Hay the land is flat, very flat, and there are large areas of saltbush country. 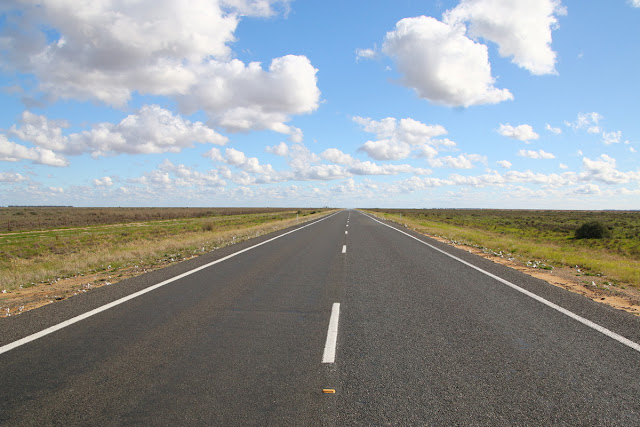 But it is also perfect for irrigation.

It's winter, so not the growing season, but as we drove on the roads near Hay we couldn't miss the fact that cotton growing is a major activity. There are cotton bolls lining the highways, debris from carting the large yellow rolls of cotton to central storage areas after harvest. I know cotton is an organic product but I wonder how long it takes to disintegrate. One plus might be that bird nests in the area will have soft linings.

The hundreds of large cotton rolls are wrapped in bright yellow plastic. Is that plastic recycled?

And there are 'turkey dams' everywhere - large dams that perch on the flat landscape, that must take an enormous amount of effort and resources to build. In my area the local water authority is closing shallow water storages because they are inefficient, the water evaporates too quickly. So why are they building shallow dams for cotton irrigation? I'll have to do some research. 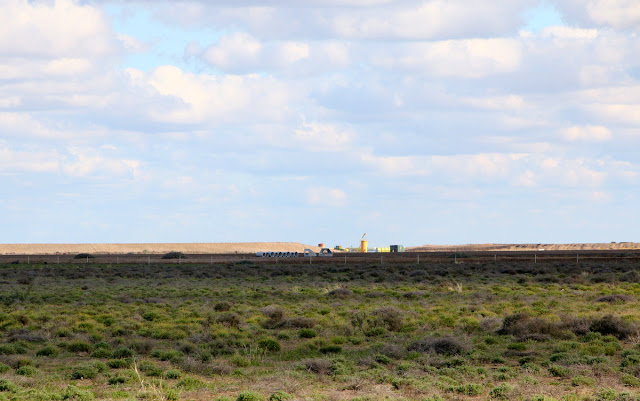 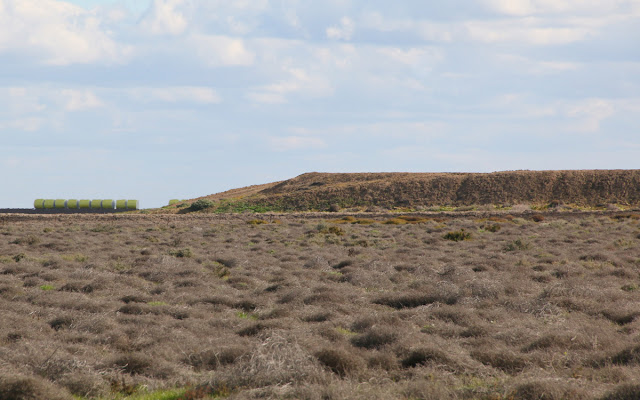 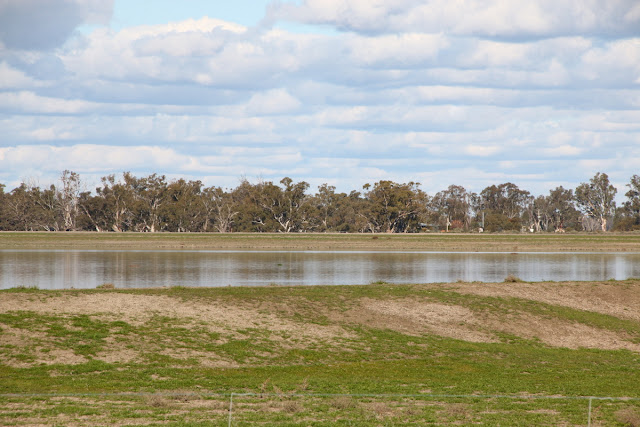 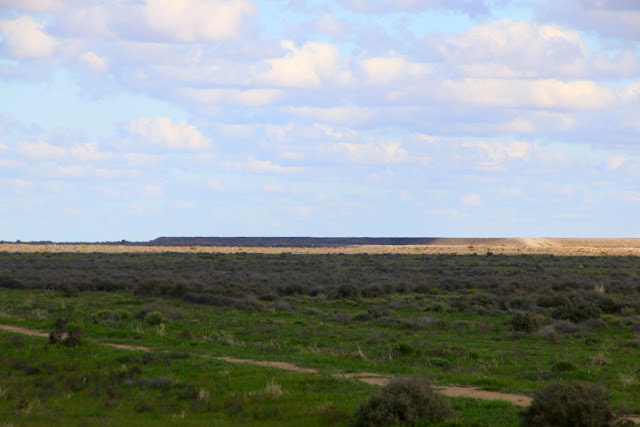 So I'm morally torn today. In my hobby of patchwork quilting I only use cotton fabrics. In summer I love wearing cotton because it it so cool. But as I drive through the cotton-growing area I'm feeling a bit negative about how we grow the cotton.
Posted by Boobook on Monday, July 20, 2015 No comments:

We hear about snow in other parts of New South Wales, in areas that haven't seen snow for decades. Roads are closed because of snow and ice, but not where we are on the Kidman Way. We've travelled in brilliant sunshine all day.

We're drove south from Bourke through some beautiful country, mostly bush, rather flat with the occasional hill or peak around Mt Hope. There is a tinge of green everywhere because there has been rain in the last month and it contrasts with the red soil and the grey foliage of the trees and shrubs. As we neared Hillston on the Lachlan River we saw signs of the agriculture. Hillston has diversified from cropping and grazing to fruit and vegetable production - cherries, potatoes, olives, cotton, almonds, capers, jojoba, citrus, watermelons and more.

Off course the downside of this is that they need water for all of the above. They use underground water and by using proper management the water entitlements have been reduced by half to 108 000 megalitres. That still sounds like a lot to me.

The largest Cashmere Goat flock in Australia is farmed near Hillston but we saw hundreds of feral goats by the highway as we travelled south. They are a real pest, doing damage to the environment by eating vegetation and trampling the fragile soil with their hooves. We saw dozens of dead kangaroos on the highways in NSW and Queensland but not one dead goat. They graze by the roads but we slowed down to avoid hitting any on the road because we didn't want to damage our vehicle, and I presume everyone else does the same. The kangaroos graze at night and try to cross the roads the heavy vehicles are travelling at speed - they don't slow down for anything. 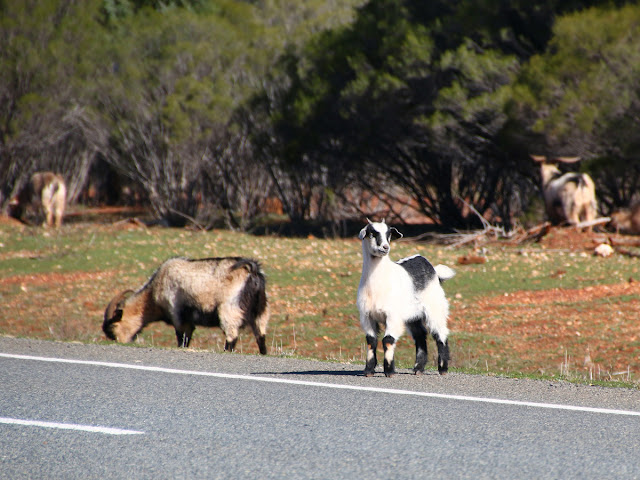 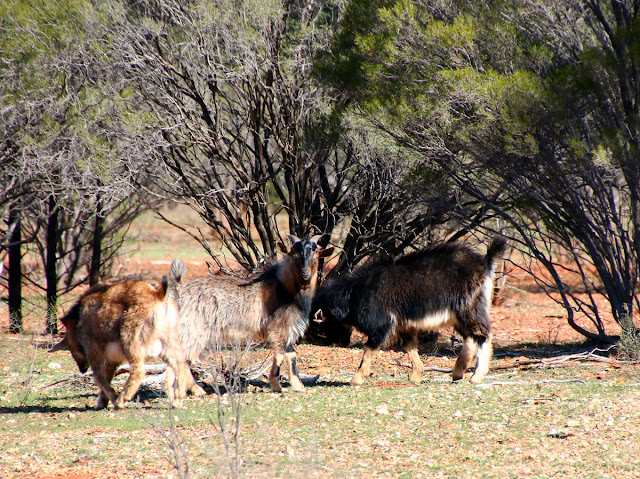 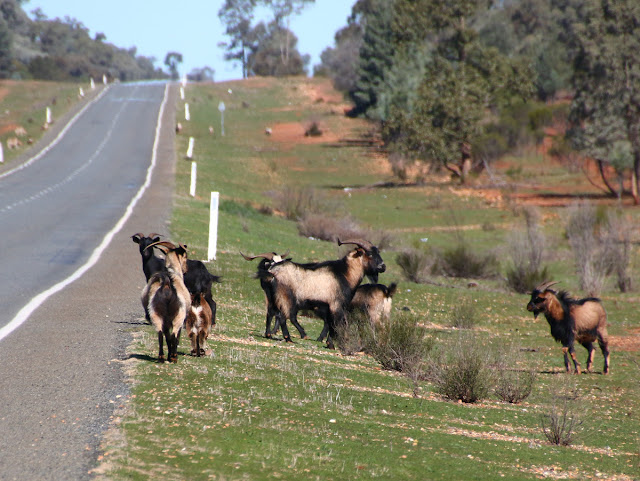 We've also seen cactus, particularly in Queensland on the St George to Cunnamulla road. Prickly Pear cactus was a huge pest in the past but it is still not completely under control. Weeds and pest animals are a problem all over our beautiful country. 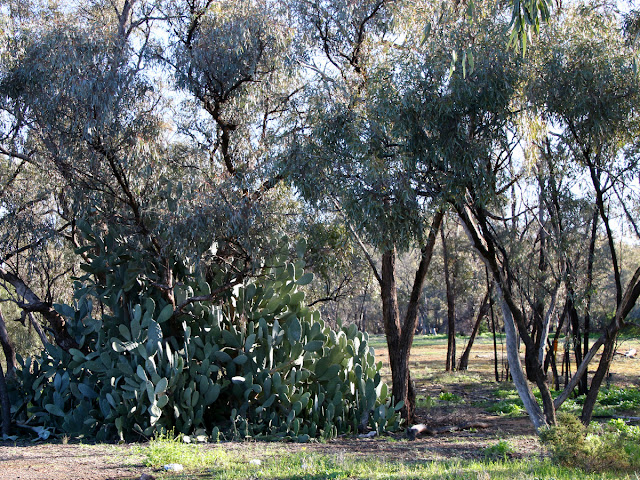 We spent some time on the Darling at Bourke today. We floated past old Coolibah trees that have had their roots exposed by fast-flowing floodwaters, under the beautiful old Bourke bridge that was designed to lift for passing river craft, around snags and past flotillas of pelicans.

Early explorers' reports about the Darling were negative and positive but it later served the early settlers well for many decades as a means of transporting wool and other produce to markets, and importing goods they needed. Unfortunately it was abused in many ways and is still recovering.

Storm over the Mitchell

We left Cunnamulla (and Queensland) this morning and turned south onto the Mitchell Highway and drove to Bourke. The scenery was more dramatic because of the storm clouds, rainbows and brilliant sunshine. 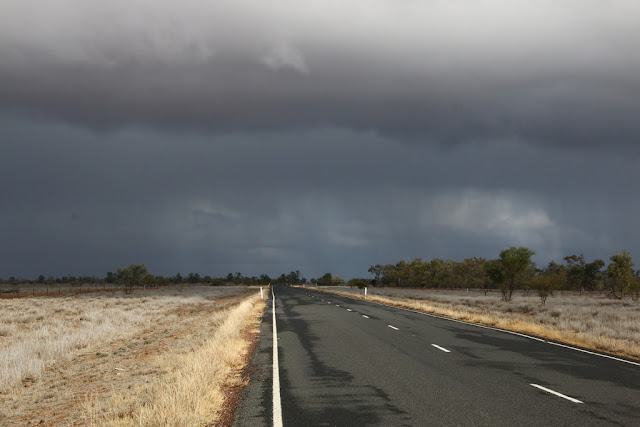 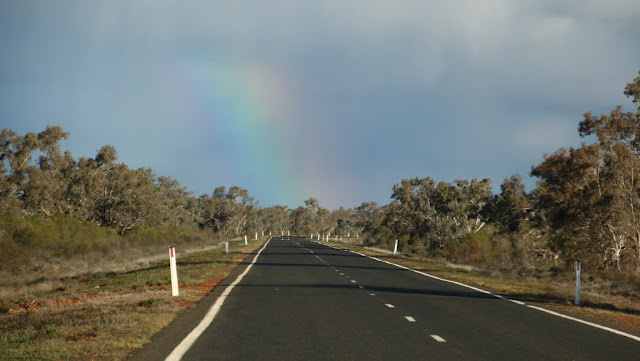 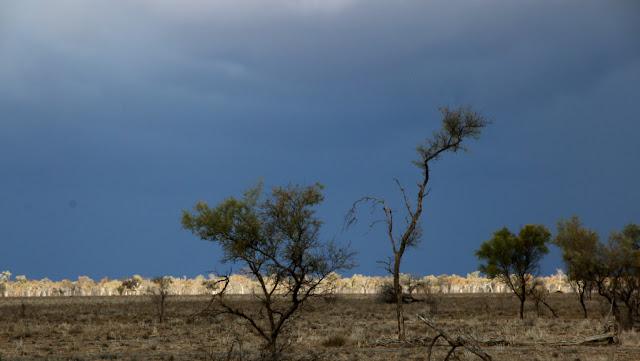 We've been to Bowra before, twelve years ago when it was still a working property. Now it is owned by Australian Wildlife Conservancy and all stock has been removed (except for a few of the neighbour's sheep and a few goats). Feral cats are trapped, rabbits controlled and a new boundary fence is high on the wish list. AWC relies totally on donations and the work of volunteers, and scientific research is conducted on all of the properties they own across Australia.

We plugged in to power at the woolshed but there were other campers in the shearers quarters and the cottage, and a few hardy souls camped by the lagoon. All the campers (about 15 in all) were birdwatchers, and we all spent our days looking for birds around the campsite or out on the roads that criss-cross the large property. At breakfast I enjoyed the company of Jacky Winters, Spotted Bowerbirds, Pipits, Emus, Peaceful Doves, Little Friarbirds and Double-banded Finches and Zebra Finches.

Each night the volunteer managers, Mike and Jane, conducted a bird call where all bird species seen during the day were recorded on a database. The elusive Bourke's Parrot was the target species (and most visitors were able to spot them) but other birds seen included nesting Red-browed Pardalote, Crested Bellbird, Square-tailed Kite, Painted Honeyeater, Chestnut-rumped Thornbill, Spotted Bowerbird, Bustard ... and about 80 other birds.

It's a great spot with a variety of habitats, and about a million kangaroos and emus. That might be an exaggeration. 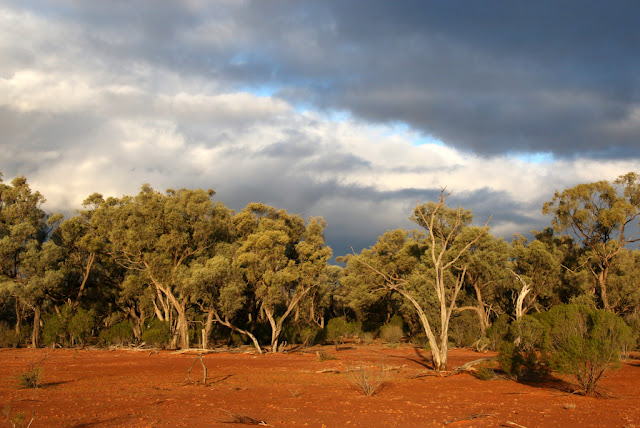 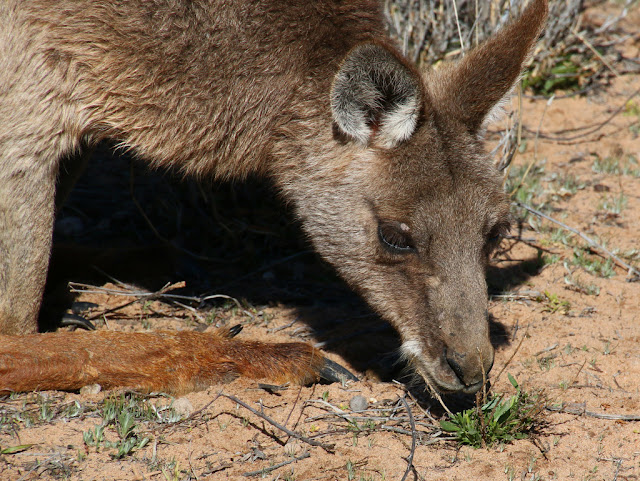 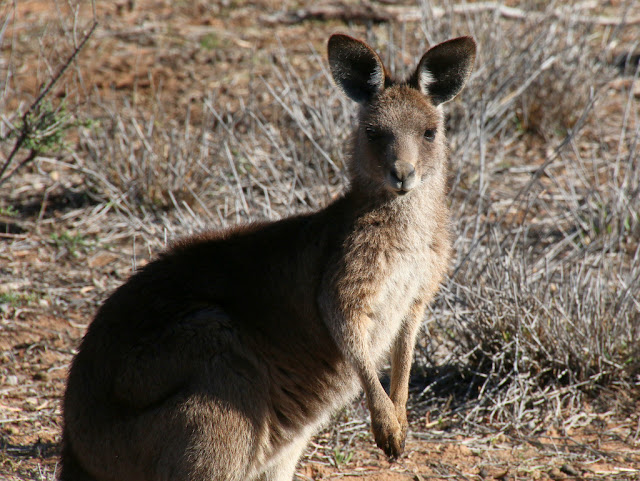 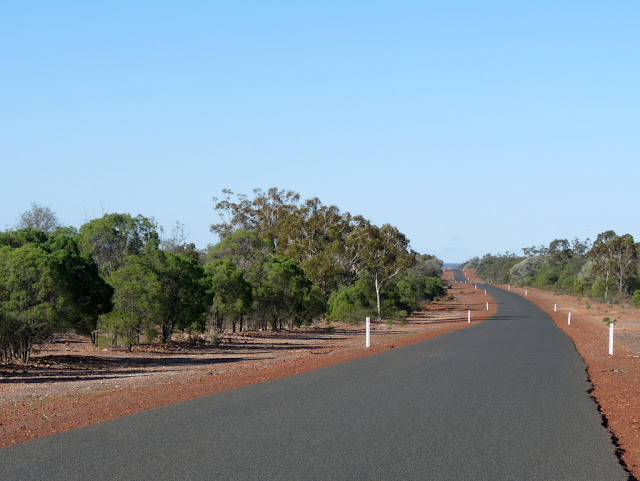