At Wilmington we stayed in a delightful caravan park called Stony Creek Camp & Caravan Park and were able to camp right next to the creek. The must have been rain in the Southern Flinders Range because the creek was flowing swiftly. Children would love it. We loved it. Kookaburras called, Brown Treecreepers foraged near our van and a family of White-browed Babblers checked out various trees and shrubs in the park


We then drove to Port Augusta through Horrocks Pass. If you've never been on that road do yourself a favour. On another occasion we drove to the lookout and the view was well worth the trip. 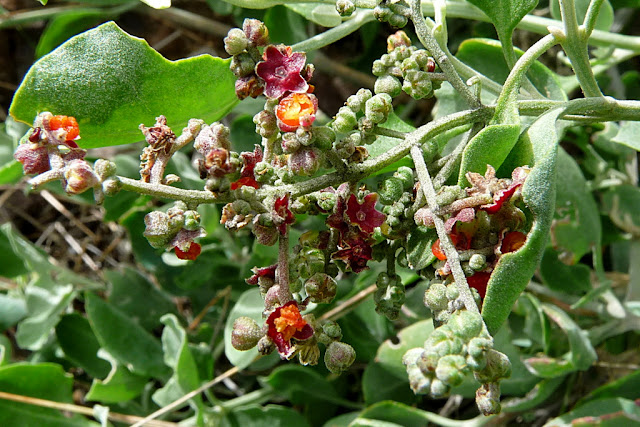 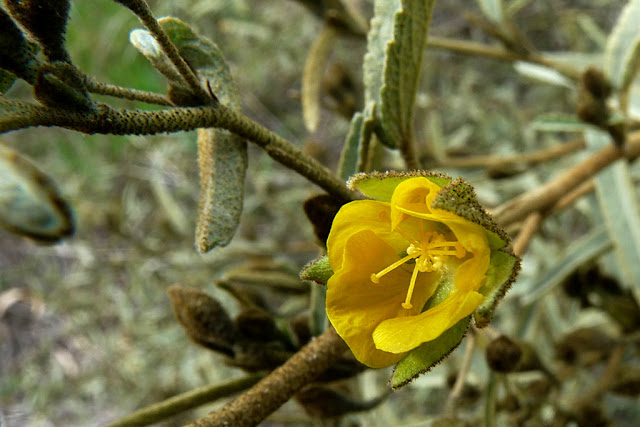 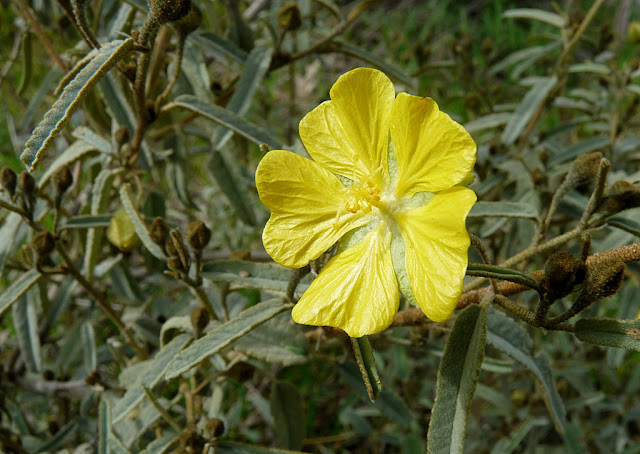 These are some of the plants I found. A number were unobtrusively flowering. I haven't attempted to identify them as yet. 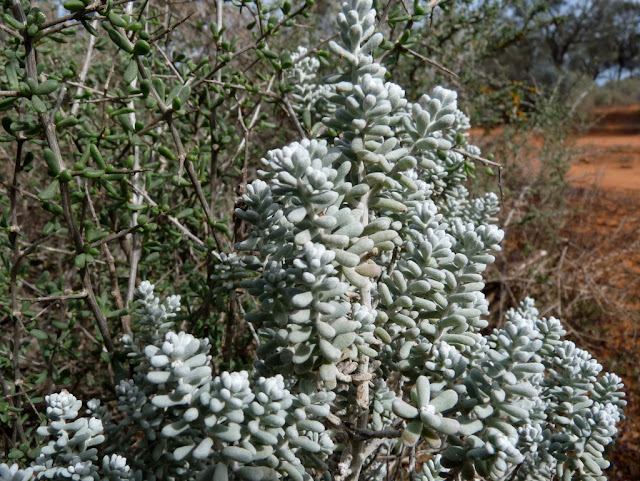 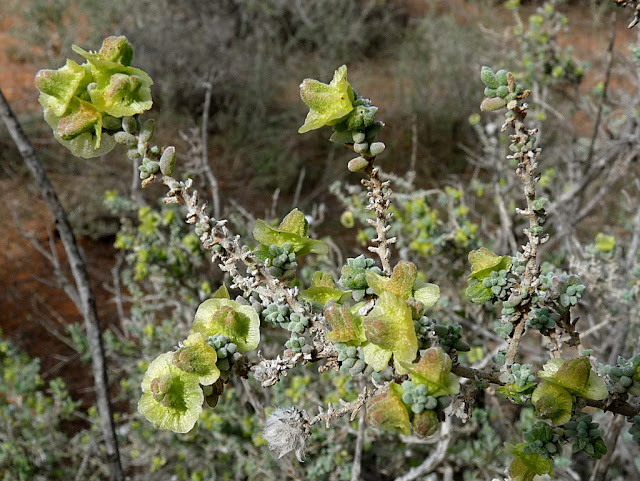 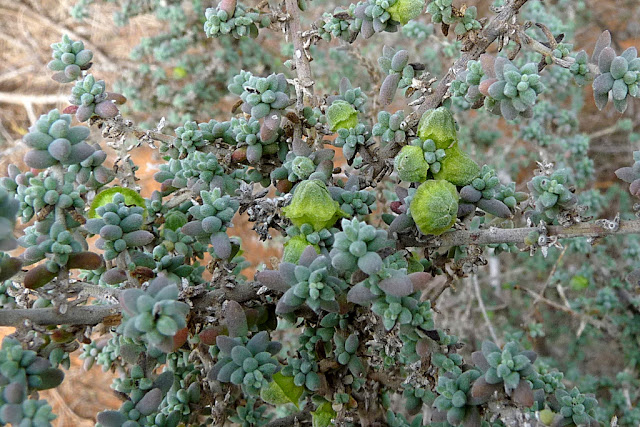 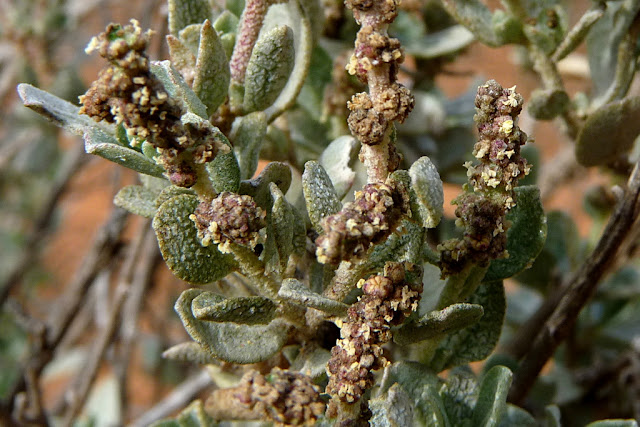 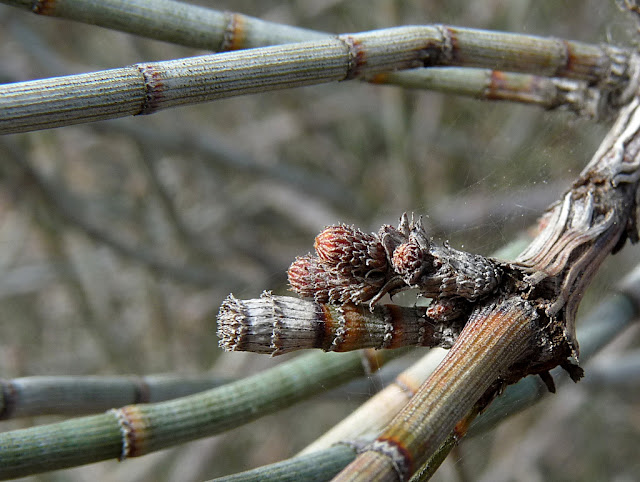 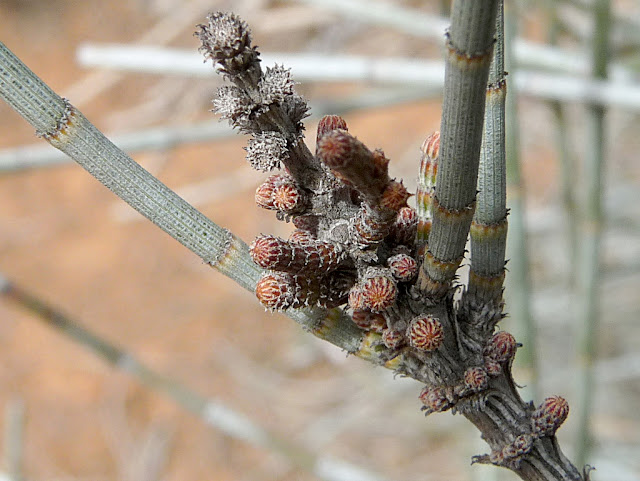 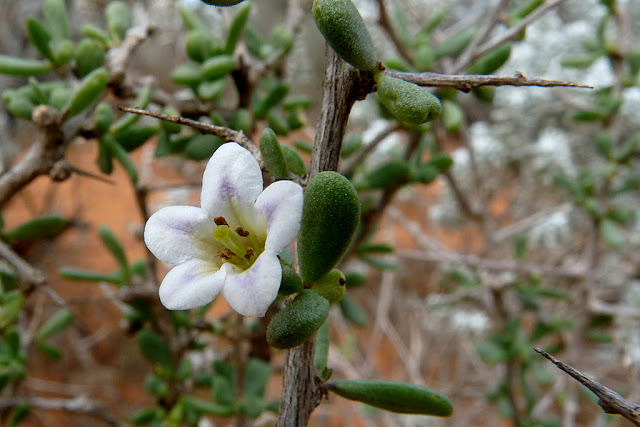 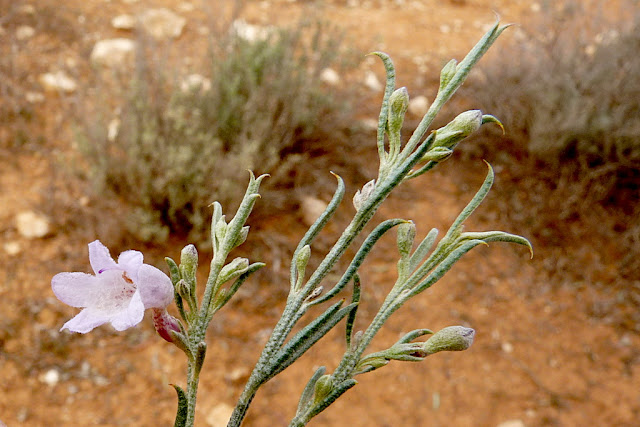 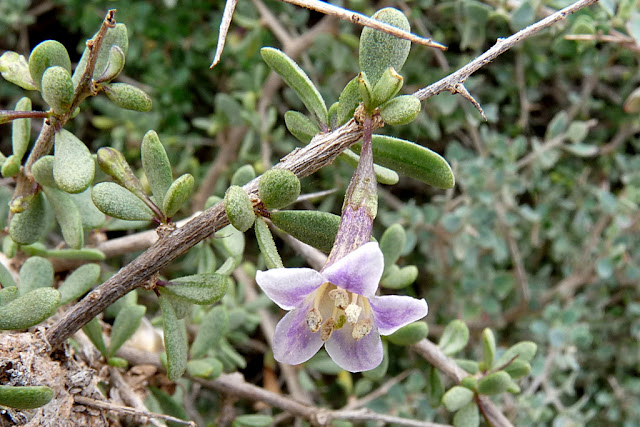 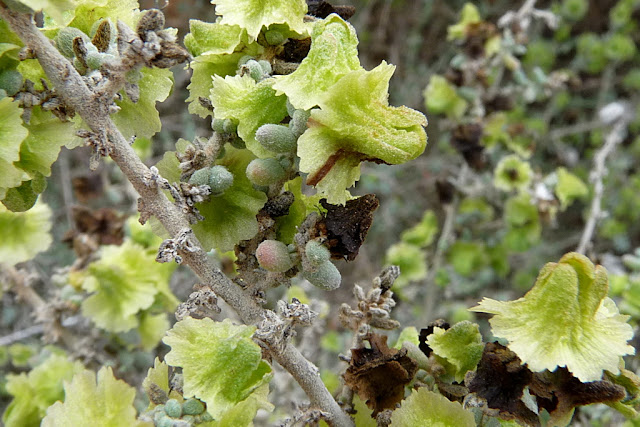 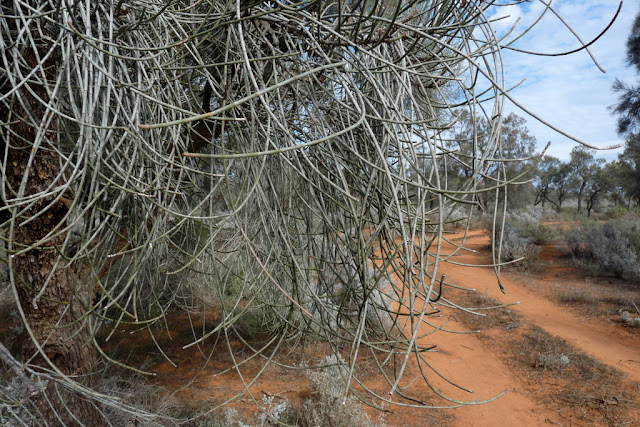 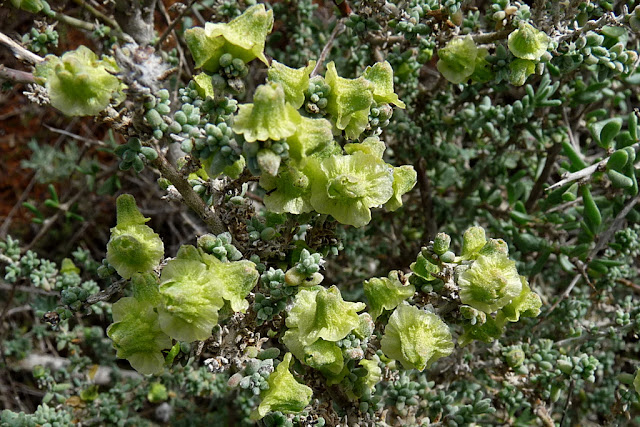 We stopped for lunch in a conservation reserve beside the Morgan-Burra Road, the Goyder Highway. It was quite windy so we were glad of the shelter.

At first glance the grey vegetation doesn't look very exciting but I found lots of interest. A few of the shrubs were flowering (see next post), there were a few birds calling ... and there was the lichen.

Lichen is slow-growing so it was interesting to see a number of species on the trees, small shrubs and the ground.

The ground lichens are of particular importance because they help to hold the otherwise bare soil in place and provide habitat for small insects. Lichens on the ground are easily disturbed by animals like sheep, kangaroos and people and they take a very long time to recover.

The following lichens were growing on small branches of shrubs and trees. Often there were two or three species together and they were much more colourful than those on the ground. 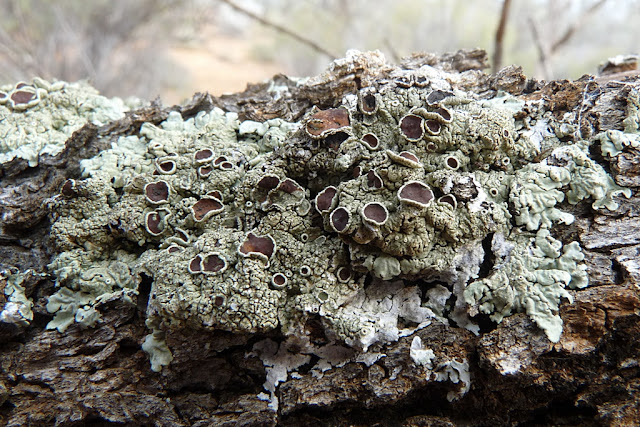 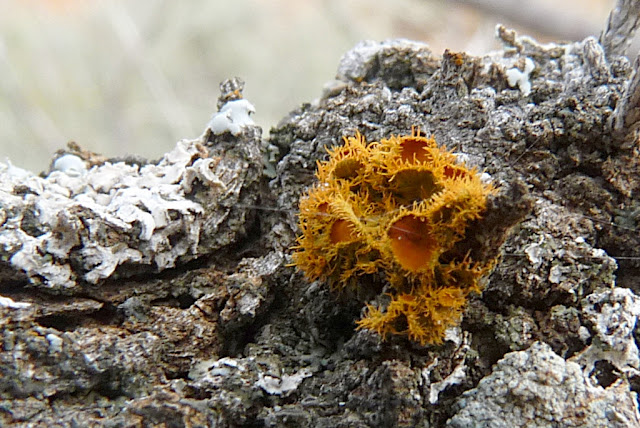 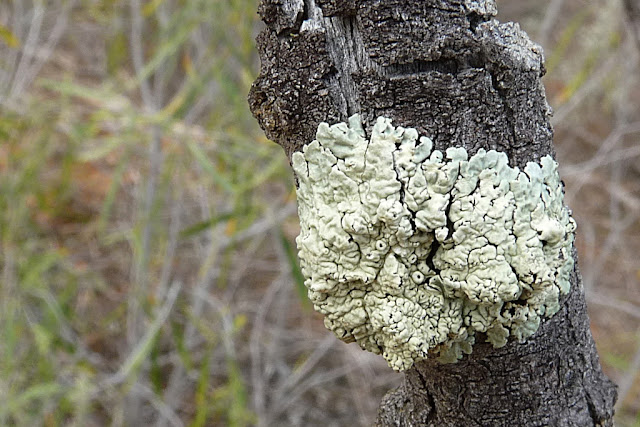 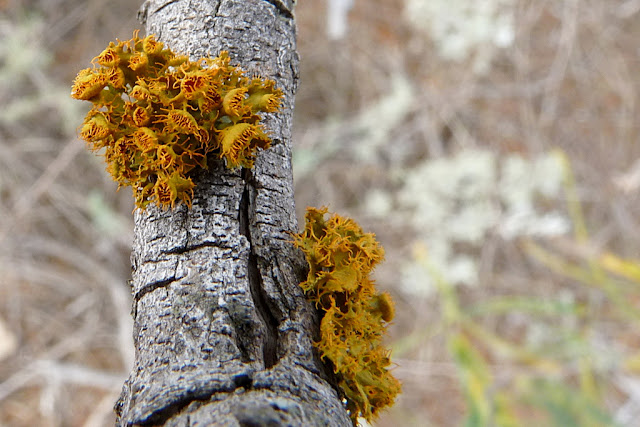 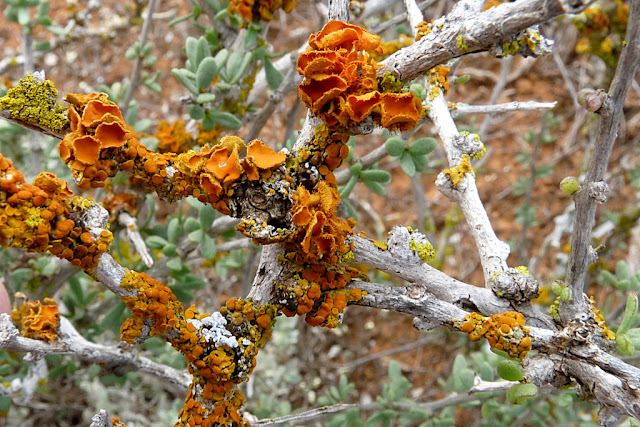 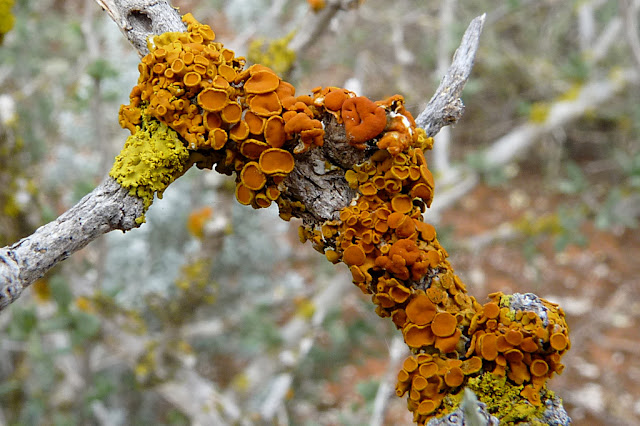 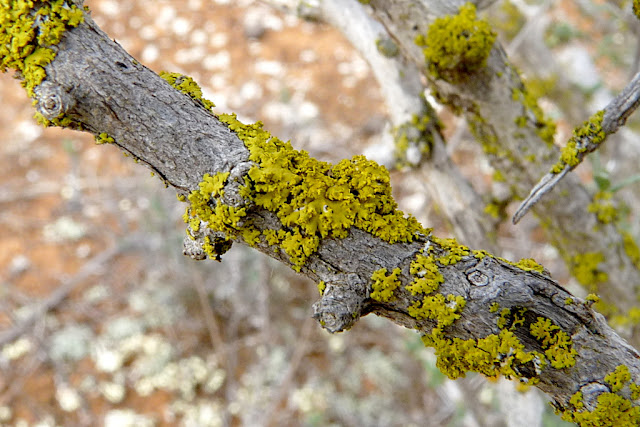 It's called a wetland but at the moment the Cadell Wetland is dry. Before weirs and dams changed the natural flow of the Murray and Darling rivers the river levels rose and fell according to the season and the cycle of floods and droughts. Vegetation in wetlands like this responded to the floods and coped with the droughts. It's all changed now so the River Redgums are stressed and so are the Black Box trees. Other species like the Prickly Bottlebrush are disappearing.

At Cadell there is a walking trail to the wetland and beyond that to the Murray River. I walked to the bird hide, reading the signs indicating plant species that might have been there when the signs were installed but they certainly aren't there now, It's time for an upgrade.

Despite that I enjoyed the walk. Near the bird hide there were White-browed Babblers and some Rufous Songlarks foraging through the small shrubs.

Cadell Wetland must be a fantastic place when there is water - like the one I saw from the car window as we drew close to the ferry crossing at Morgan. Now why is that wetland wet and the one at Cadell dry? They are only about 10 kms apart.
Posted by Boobook on Saturday, July 30, 2016 No comments:


We don't play golf, and don't hanker after a house beside a golf club like those at 13th Beach at Barwon Heads, but we got a taste of what it's like when we stayed the night beside a fairway at Loxton Golf Club. There are only about ten powered sites near the clubhouse so it was very pleasant. I was surprised to be serenaded by the persistent call of a Pallid Cuckoo (they only call in summer at home).

We had made soup with most of our vegetables before we crossed the border but lost a few apples and bananas at the quarantine station so we had to go shopping at Berri for fruit and vegetables to restock. We also took advantage of one of the numerous roadside fruit stalls to buy local oranges and pumpkin. And then on to Barmera for lunch beside the lake. About 50 years ago Phil's family started to regularly holiday at Barmera for waterskiing on Lake Bonney so we know the area fairly well. The foreshore area is much more upmarket now and the lake was looking beautiful in the sunshine.

The road took us parallel to the Murray via Overland Corner.

We crossed the Murray again via the Cadell ferry and camped by the river, just downstream. The cliffs are quite spectacular here and at night the cliffs, river and river redgums are spotlighted from the south side of the river. Serendipity is a marvellous thing.

We're on the road again and will blog to record our adventures.

We left home a week ago but have only today left the state. We have visited our parents, three of whom are in their nineties, and Phil has installed a diesel heater in the van so we can freecamp in comfort. Last night we camped beside the Murray at Boundary Bend and we're well pleased - the heater is so warm and cosy and economical.

I asked a local resident at Boundary Bend if the fish were biting. He said the 'Bidgee was bringing down too much muddy water at the moment and that it wouldn't be worth fishing until about September. The Murray was flowing quite fast and was indeed muddy. There were hundreds of very noisy Little Corellas in the trees along the bank and our local informant told us that they appeared after the numerous plantations of almond trees started to mature a few years ago. But I also saw a beautiful Mistletoebird, Common Bronzewings, Superb Fairywrens and  Yellow Rosellas foraging in and around the eucalypts, a stately Great Egret waiting patiently in the shallow and several Pelicans loafing on the bank. It's a beautiful spot even on a cold and grey day.

A few hours later we stopped for lunch beside another stretch of water. Lake Cullulleraine is on the Sturt Highway near the border of Victoria and South Australia. The lake is in a natural depression that in the past only filled when the Murray River was in flood but the water level of the lake is controlled now. There is a walking track all the way around, 10.4 km in total, if one should feel inclined. The birds weren't on the lake, they were in a small pool beside the lake. It almost looked like they had their own infinity pool. Coots, Black Ducks and Eastern Swamphens were sheltering from the rough water on the lake itself and grazing on the mown grass of the picnic area.

We are heading west, across the Nullarbor to Perth and the south-west. Hopefully the sun will shine more than it did today.
Posted by Boobook on Thursday, July 28, 2016 No comments: