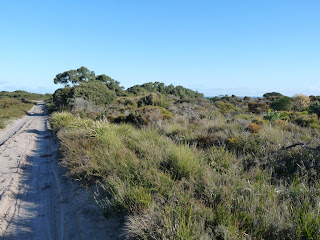 I like what I see.
With family now living in Wonthaggi it's been interesting to explore a new area on a regular basis. This time I had a brief taste of the Wonthaggi Heathland Reserve. It looks fantastic and must be a great place to visit in spring. Yesterday the Epacris impressa was flowering in various shades of pink, there were a few flowers on tea trees, wattles, guinea-flower, Drosera macrantha and Wedding Bush - just enough to see what it's going to be like in a few weeks time. I found a few fungi species beside the track and leaves of orchids, and heard a few birds and frogs. I'll be back. 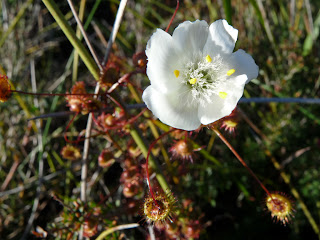 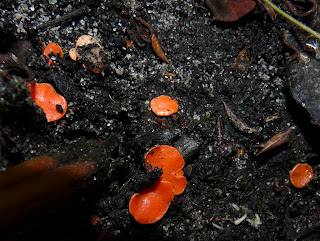 I take my grandson for a 'walk' in his pusher around the Wonthaggi Wetland and he sleeps and I look at birds, so we both win. 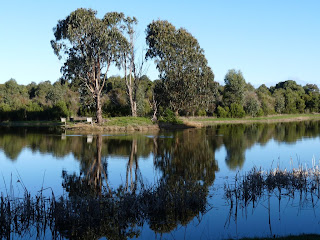 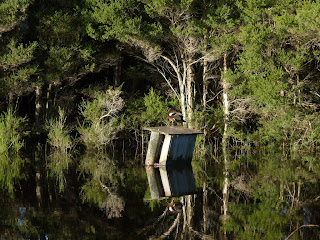 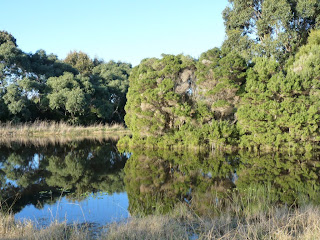 Email ThisBlogThis!Share to TwitterShare to FacebookShare to Pinterest
Labels: Wonthaggi

The building of a bridge from Goolwa to Hindmarsh Island was hugely controversial so I was mindful and respectful of that as we drove across to have a look at the mouth of the Murray last week. Thankfully the bridge itself is quite beautiful. 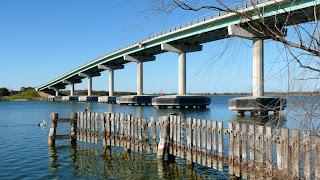 There's a memorial to Charles Sturt on Hindmarsh Island, erected in 1980. "Hereabouts in February 1830 Sturt first saw the waters of Encounter Bay thus crowning his heroic voyage of discovery down the Murray River." We were somewhat shocked at the condition of the grounds around the memorial, the steps and the parking facilities. There is a dire need of a makeover. 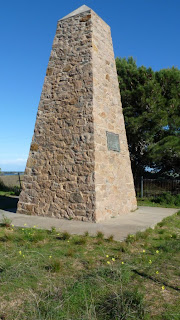 The memorial also commemorates Collett Barker, a friend of Sturt, who was killed by local aborigines after he swam across the mouth of the Murray in the following year.

We drove to the beach on Hindmarsh Island that is the closest point to the mouth of the Murray. The Murray was open to the sea, just, two sand dredges were operating to keep it clear...and there were fishermen and their 4-wheel drive vehicles on the beach! Why oh why is this still allowed in some states? Hoodies don't stand a chance. 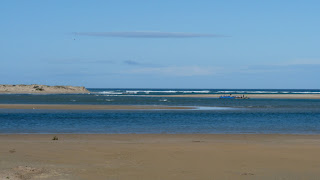 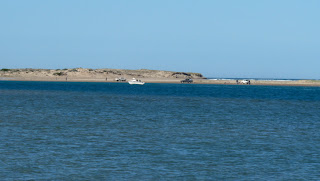 Trevor emailed me a photo of a helmet orchid that he found near the Elliot Traps he'd set in the Inverleigh Flora and Fauna Reserve. "Meet me there at 8.30 in the morning?" he asked. So of course I went, along with several other friends. Sadly Trevor didn't trap any mammals in four days of trapping but we found four, maybe five, orchid species this morning. 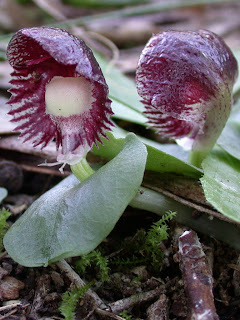 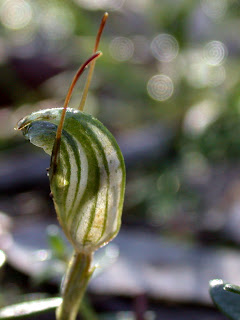 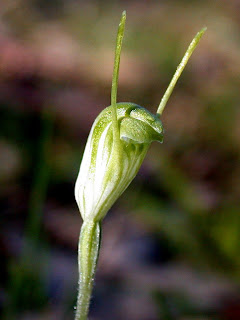 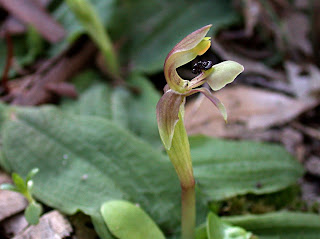 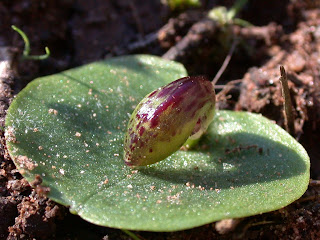 Update: The above is almost certainly a bud of Corybas incurvus Slaty Helmet Orchid. [Thanks Helen and Neil]
Posted by Boobook on Saturday, July 17, 2010 No comments:

It's been a subject of conjecture around here for several months. The local sheoaks, the Drooping Sheoak Allocasuarina verticillata, are dying or under severe stress. What's going on? Is it salt, climate change, drought?

Now we know the answer. It's a caterpillar, the Sheoak Moth caterpillar Pernattia pusilla. They are in plague proportions and are defoliating the sheoaks. If you drive the roads between Geelong and Barwon Heads or walk creek reserves you'll see a lot of seemingly dead sheoaks.

With this in mind I checked the male Drooping Sheoak growing in my garden ... and found one caterpillar at eye level. Hopefully he is a loner. The tree is looking pretty spectacular at the moment, covered in long cascades of male flowers. 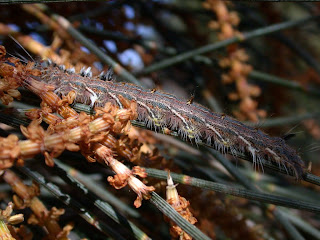 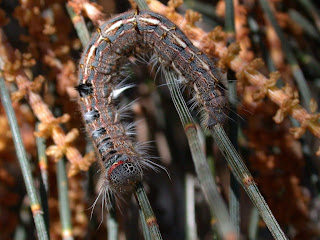 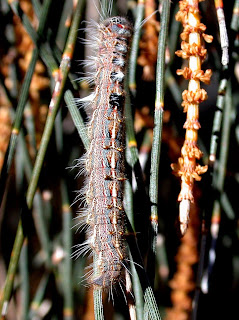 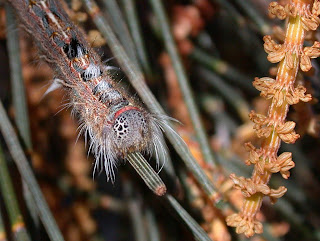 It's a long day's driving from Geelong to Adelaide so interesting rest stops were welcome. One was at Pink Lake near Dimboola. It really is pink. There's been a bit of rain this year so the lake has water in it, but in summer, after the water has evaporated and left a salty crust, the harvesters will be scraping the surface like they used to years ago. In those days the salt was used for glazing sewage pipes and the Country Roads Board used it to put alongside of their white posts to kill the weeds. And butchers used it for pickling meat. Now Parks Victoria has given permission for a company to use it as a culinary salt because as well as being tasty the mineral content is nutritional. The pink colour is apparently a beta carotene that's produced by a live algae.

It looks very pretty but there's no way I'd be out there on a hot summer day to harvest the salt. Imagine the glare and reflected heat!

Sometimes a blog just arrests my attention, grabs me by the throat. Duncan's did that this morning. He doesn't allow comments on his blog so this is my way of commenting.

I've always enjoyed his writing skill as well as his observations and his wonderful photos. This blog has it all. Even poetry: "..the two paddling emus near Hamelin Pool, frozen in the blue yonder by the 400mm lens."

Thanks Duncan. I loved reading about your journey.
Posted by Boobook on Sunday, July 04, 2010 2 comments:

Email ThisBlogThis!Share to TwitterShare to FacebookShare to Pinterest
Labels: blogging

Alanna Mitchell's contention is that if the ocean dies so does all life on earth.

In 2008 Alanna, an international award-winning journalist, travelled the world working with scientists who were researching the oceans and the life in the oceans and then she wrote a book called Seasick. On 18th June Alanna Mitchell won the $US75,000 2010 Grantham Prize for Excellence in Reporting on the Environment for Seasick. The chairman of the Grantham Prize Jury said, 'Reading Alanna Mitchell convinces you that the ocean is at least as important as the atmosphere when we worry about climate change. You cannot put this book down without understanding that, for life on earth to continue as it is, the ocean from which we evolved must remain healthy.'

We land-lubbers have been treating the sea badly for centuries and now we pay the price. There are not 'plenty of fish in the sea', we cannot keep on using the ocean as an endless sewer and grocery store, we cannot saturate the Southern Ocean with carbon dioxide and expect the plankton and other creatures to survive - most of Earth’s oxygen is produced by phytoplankton in the sea and these humble, one-celled organisms, rather than the spectacular rain forests, are the true lungs of the planet. We already have dead zones in the ocean as a result of human activities and more to come. There are huge implications if the pH of the ocean continues to rise, if the temperature of the ocean continues to rise. We're in trouble if the currents in the north Atlantic stop or change. Alanna writes about keeping the ocean's life switch turned on. It's a scary book because the experts agree that the time frame is so short. They're talking about 30 years.

We talked about all of this at our Eco Book Group meeting this week. Alanna ends with a message of hope if we all start pulling together right now. Am I hopeful? No.
Posted by Boobook on Thursday, July 01, 2010 No comments: