The reason we were on the Barham River Rd at Apollo Bay (see previous post) was that we went to the Wildlife of Gondwana exhibition. We'd left it until the last minute - it closed today - but I'm very glad we didn't miss it.

Dinosaurs have been blasted (yes, blasted!) from the rocks on the coast west of Cape Otway and some exciting discoveries made, so palaeontologists and Monash University set up this wonderful display of fossils and cast fossils from Gondwana. A group of locals is hoping that a permanent museum can be established in the future and I reckon it would be successful given the number of people who visit the Great Ocean Road each year. 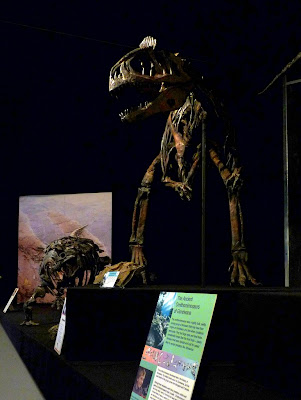 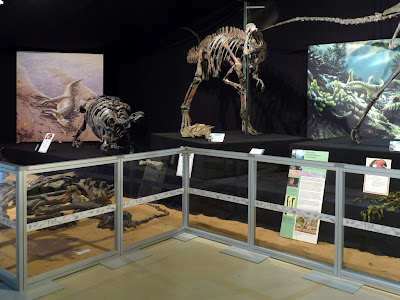 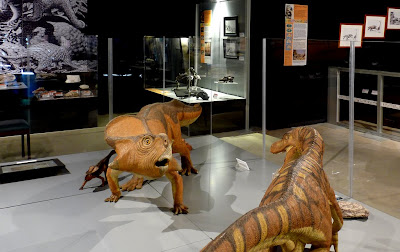 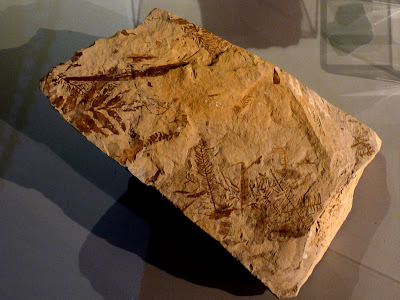 Plants that dinosaurs ate - the vegetation in polar Victoria (in the Early Cretaceous period) was dominated by ferns, evergreens and gingkoes. (Boola Boola, Gippsland.) OK, I admit I'm not that knowledgeable - I'm quoting from the label! 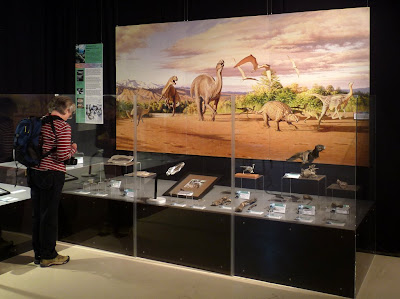 Peter Trusler won the Eureka Prize (and achieved the front page of Time magazine) for this painting he did for Australia Post. They released it as a stamp series in 1993. It depicts Australian dinosaurs with intriguing names such as Muttaburrasaurus, Minmi and Timimus.
Posted by Boobook on Sunday, April 29, 2012 No comments:

The river and its valley would have been beautiful once but at the moment it's showing the damage caused by human habitation over the last 150 years. But there are steps being made to remedy the situation.

The Barham River is a small waterway running out of the Otway range behind Apollo Bay on Victoria's Great Ocean Road and, although there are plants and animals of State and National significance in its catchment, the problems are immense: nutrient runoff, erosion, fish barriers, stock access, weeds (including willow, blackberry and ragwort), intense recreational use, timber plantations, increasing algae due to lack of shade, septic soakage, fire, artificial opening of the sand-blocked estuary, unprotected banks etc etc. But the authorities are aware of all of this and more, and so are individuals in the local community and things are starting to change.

Today we noticed in one section close to Apollo Bay the willows are being removed  (leaving roots in situ in order to reduce erosion) and fences to exclude stock are being erected. Hurrah! 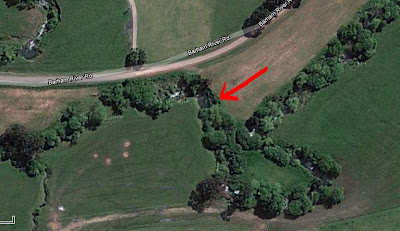 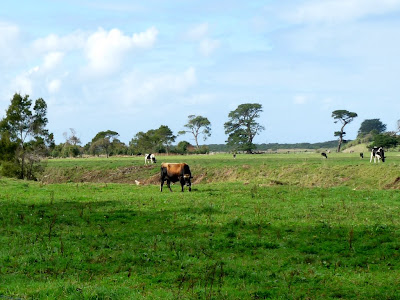 After: The willows have been removed and stacked ready to burn. 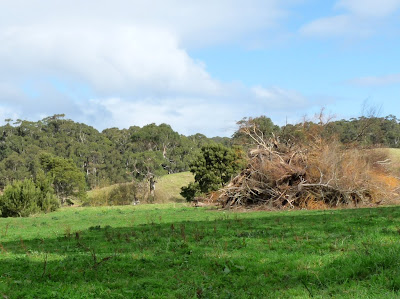 Update: This announcement last week is good news for the Barham River (as well as the Moorabool and the Barwon).

Barwon Water will contribute more than $300,000 to local Landcare groups over the next three years.The corporation has already provided more than $1 million to Landcare over the past decade.In the latest move, partnerships have been renewed with the Southern Otway Landcare Network (Barham River catchment) and Upper Barwon Landcare Network (Upper Barwon River catchments) while the Moorabool Catchment Landcare Group (Moorabool River catchments) will be supported for the first time.
Each group will receive $35,000 a year for three years.Barwon Water Chairman Dr Michael King said the Landcare partnership program had been successful in helping protect and enhance the region’s quality water resources by protecting, stabilising and revegetating riparian areas.

When I was growing up I only knew two ferns, the Maidenhair (Adiantum aethiopicum) and Bracken (Pteridium esculentum). Both grew in the sheltered bush on our property and bracken grew in the open paddocks as well. We kids headed for the bracken clumps because we knew that we would find rabbit warrens there and in the pre-mixamytosis days of the 1950s we made a bit of pocket money trapping and ferreting for rabbits.

But that's another story. This blog is about ferns. About my ignorance of same. Over the years I have managed to build up a bit of knowledge about flowering plants, insects and birds. But ferns? No. Nothing. I've been on excursions in the Otways with experts and on field trips with knowledgeable amateurs. I've checked my own references and the internet after taking photos of ferns, in an attempt to identify what I've seen, and failed. Is it really so hard?

I've had a few successes. I now think I recognise the Screw Fern, the Kangaroo Fern, Coral Fern, Mother Shield-Fern, Pacific Azolla, Sickle Fern and Nardoo. But then I lose confidence when I'm faced with a choice: Is it a Mother Shield-fern or a Bristly Shield-fern? Is this a Rough Tree-fern of a Soft Tree-fern?

My knowledge of ferns was put to the test yesterday when we explored some of the delightful tall trees and ferny understories of forested areas near Beech Forest in the Otway Ranges. You go into sensory overload in these forests with the smells, the sounds and beauty in abundance. 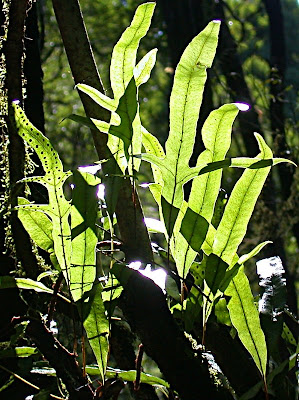 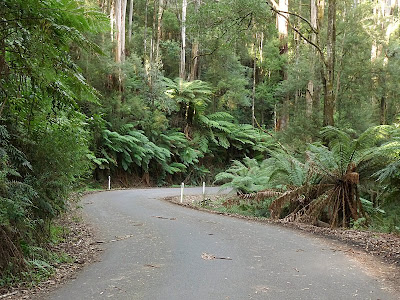 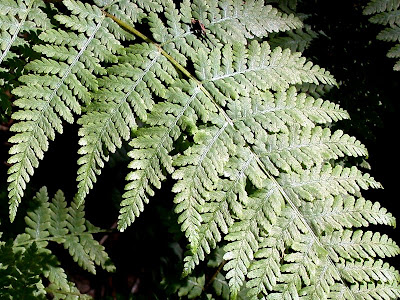 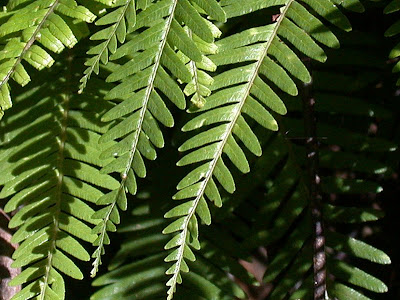 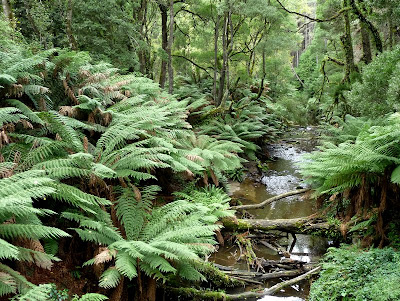