We've been a bit busy this week and I'm feeling my age. With 400 trees to plant in a corridor on our farm we enlisted some family helpers, including our grandson. We did it the old-fashioned way - dug a hole for each tree and installed a shelter. The shrubs and trees we planted are the same as those that grow naturally in the surrounding bush and hopefully the local birds, reptiles, koalas, possums and insects will find it a good place to live in the future. 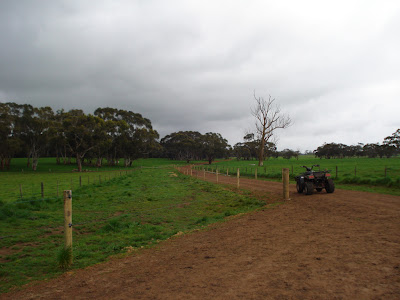 This is one of the corridors we planted out, a space created when the farmer leasing the property wanted to narrow the laneway so that the dairy cows could be moved faster. 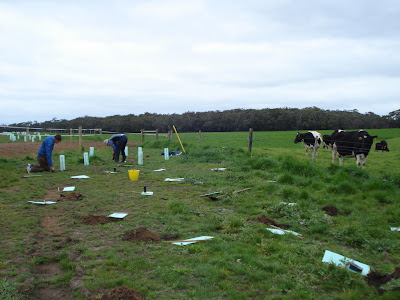 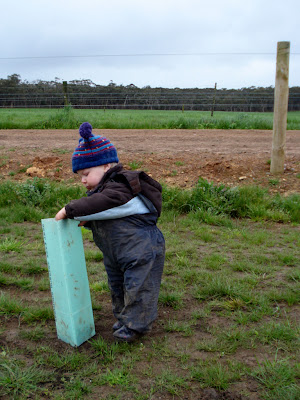 The first European to visit Phillip Island was George Bass in 1798. His mode of transport was a 27' whaleboat. He and six seamen rowed down the coast from Sydney and in the process proved that Van Diemens Land (Tasmania) was separated from the Australian mainland by a strait (now called Bass Strait). (As an aside, they discovered seven escaped convicts on an island in the strait and took them back to Sydney - it must have been a squash, and they were on very limited rations.)


I have named the place from its relative situation to every other known harbour on the coast, Western Port.....The land around Western Port is low but hilly. The grass and ferns grow luxuriantly and yet the country is but thinly and lightly timbered. The gum tree, she and swamp oaks, are the most common trees..little patches of brush are to be met with everywhere. The island is but barren. Starved shrubs grow upon the higher land, and the lower is nothing better than sandy beaches, at this time dried up...we saw a few brush kangaroo, the wallabah, but no other kind. Swans may be seen here, hundreds in flight, and ducks, a small but excellent kind. There is an abundance of most kinds of wildfowl.

(From Journey of a Whaleboat Voyage, Bass' own account)

Phillip Island is very different now. Agriculture, tourism, and a race track are all important components but the natural environment is protected in certain areas. We didn't have time to explore Cape Wollamai but it would be good to go there in the summer when the shearwaters in their hundreds fly back to their burrows.

We visited Churchill Island, joined to Phillip Island by a causeway. We found a Cape Barren Goose and family of chicks beside the causeway road. 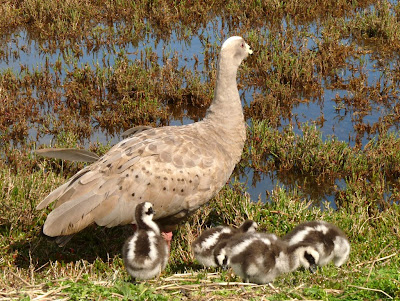 Churchill Island is a historic working farm now but there are important protected mudflats and revegetation projects on the island itself. There are still some old and gnarled Moonahs Melaleuca lanceolata, maybe 500 years old, with trunks that look like twisted rope, growing among the 50 million-year-old basalt rocks on the shore and cliffs. So they would have been growing there when Bass visited and Grant planted his crops. In 1801 Lt. James Grant landed on Churchill Island and planted the first crops in Victoria but his residence was only temporary. It was over 40 years before a pastoral lease was taken out on the whole of Phillip Island and sheep introduced. 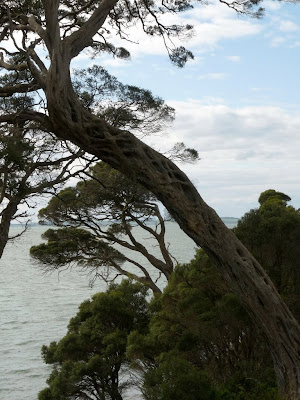 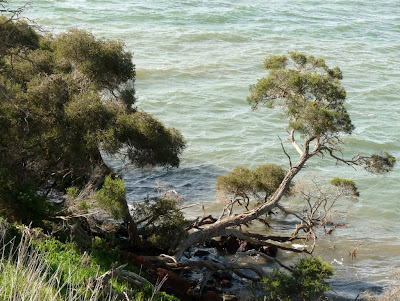 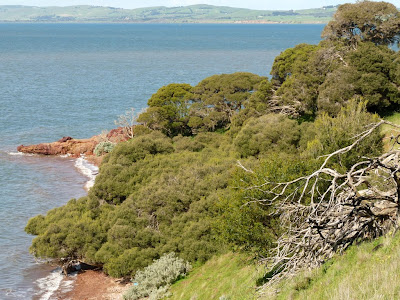 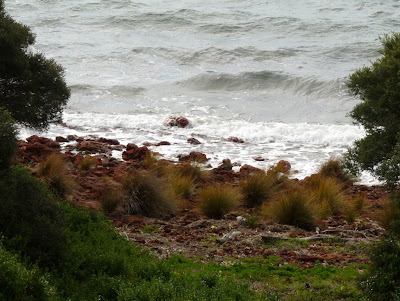 A boardwalk covered in tourists, a seabird 'garden' covered in nesting Silver Gulls and Little Penguin burrows, spectacular views of a rugged shoreline and several islands, an information centre complete with cafe, an important breeding colony of seals, pounding waves - this is The Nobbies on Phillip Island east of Melbourne. 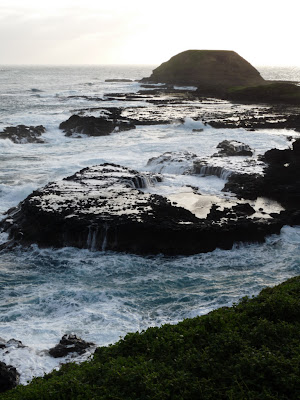 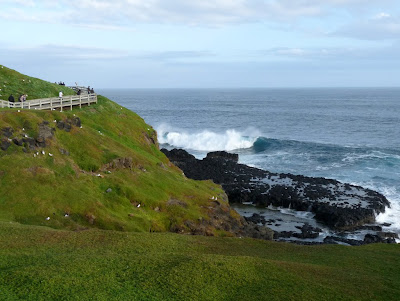 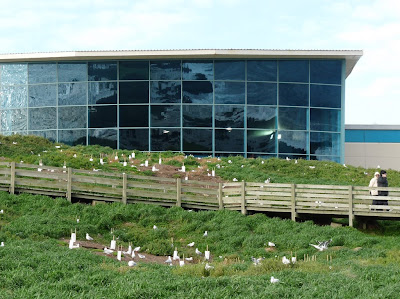 I've never seen a breeding colony of Silver Gulls - they're one of our most common birds but they breed on offshore islands. And the headland near The Nobbies since a successful revegetation project. The revegetation area is now called a 'breeding bird garden' and has it's own EVC catagory - pigface, poa, Bower Spinach and a senecio make up the flora community. 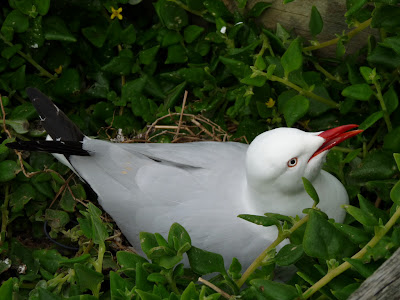 Little Penguins are also nesting on the cliff and we saw several young ones in their burrows, unnoticed by the tourists. (OK, we were tourists too, but of a superior quality.) We also saw several busloads of tourists fleetingly visiting several areas on the island before going to the Penguin Parade. And we managed to avoid the big crowds attending the Phillip Island round of the V8 Supercar series. (No I'm not a petrol-head, the last sentence is a direct dictation from my brother-in-law.) 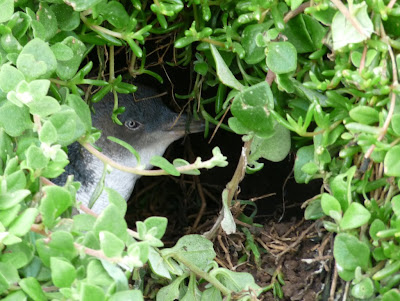 Posted by Boobook on Saturday, September 11, 2010 No comments:

A feast of fungi

Visit to the Otways, Part 2. This time the fungi we found at Blanketleaf Picnic Ground yesterday - an unexpected bonanza. Even though we've had rain I hadn't expected the fungi to still be so prolific and varied. The IDs are suggestions only - I'm happy to be corrected. 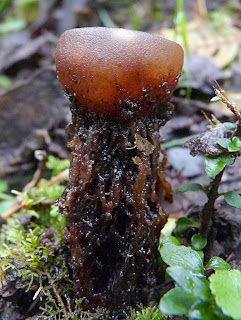 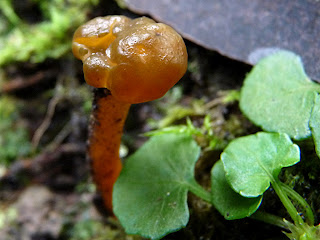 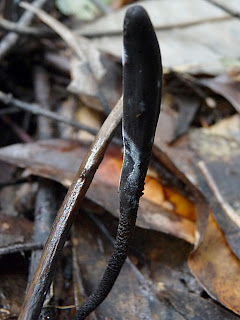 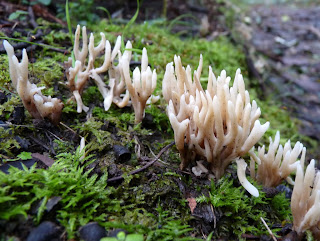 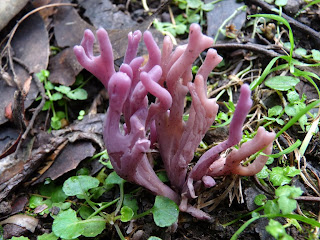 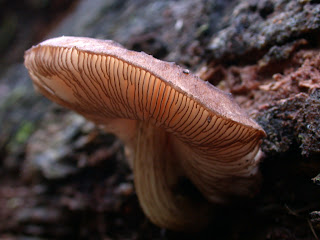 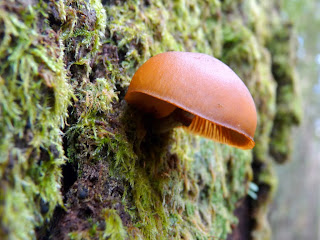 I can't begin to explain how lovely it is to spend a day in the wet forest of the Otway Ranges. The tall dripping ferns, the fungi, the damp mulch, the sound of running water, moss, tall trees, birds calling, shrubs and herbs starting to flower, the solitude - all contribute to a wonderful environment. It's been raining this year for a change so the dampness is a true delight. I'm sure the flora and fauna are appreciating it as well.

We went down a walking track at Blanketleaf Picnic Ground north of Lorne and there was so much to see it took us more than an hour to go only about 200 metres in and back again. Interesting fungi was everywhere and that's what slowed us down the most. I'll post some photos of those later.

But Rosalind also found two snails, the rare Otway Snail that I've blogged about before here and one I hadn't seen before, a little Helicarion nigra. 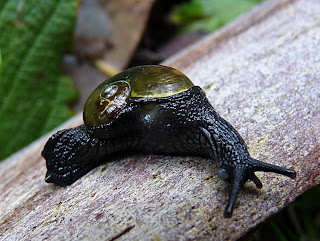 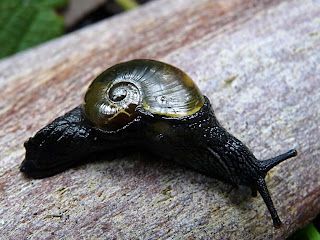 It had a small glossy shell, too small to retract into. It is quite slug-like. Snail will know more than me but it seemed to me to be a primitive type of snail. We found it in moss on the ground on a damp south-facing slope in the forest and moved it to a piece of bark to get its portrait taken. The shell is horizontal and quite flat. I wonder if it's carnivorous like the Otway Snail.
Posted by Boobook on Thursday, September 09, 2010 2 comments:

Over the last few months we've all seen images of central Australian plants and animals responding to higher rainfall and water in creeks and swamps, we've seen images of lakes like Lake Eyre that have earned the title 'lake'. Scientists have been out in the desert areas trying to document huge increases in bird numbers, breeding events, plants germinating from long-dormant seeds, mammals and insects that are finding the larder full for a change.

On our recent trip to the area round Alice Springs we found numerous Budgerigars breeding in River Red Gums along watercourses - it was a delight to watch their antics - and noted Zebra Finches simply everywhere. Seed supplies must be plentiful and water too. It would be wonderful to be able to explore places like the Simpson Desert and the Channel Country now, when they're at its best.

Scientists are gradually building up knowledge of how Australian plants and animals respond to the semi-arid conditions that cover 70% of our country, how they cope with long dry periods and times of plenty after rain events. Some of the experts were asked to contribute chapters to a book called Boom and Bust: Bird Stories for a Dry Country edited by Libby Robin, Robert Heinsohnn and Leo Joseph. It is an award-winner (the Whitley Award and the NSW Premier's Award) and our Eco Book Group decided to make it our study book this month.

We all agreed that Boom and Bust was a most enjoyable read and it generated a lively discussion. Each chapter of the book concentrates on one bird species' response to good times. We learned about woodswallows, zebra finches, grey teals, emus, koels and black-tailed native hens. And pelicans, and brolgas. And the extinct genyornis that couldn't cope at all well with changing climate and vegetation. And night parrots. So many interesting stories told well. We learnt that humans will have to learn to adapt to changes too and that there are lessons to be learned from observing the behaviour of white-winged choughs - all very charming and cooperative when food is plentiful but watch their true natures appear when there isn't enough food to go around. War is declared.

This is a book about birds but non-birders would enjoy it as well.
Posted by Boobook on Thursday, September 02, 2010 1 comment: