When we visited Sydney last week I didn't even get my binoculars out of my backpack, but I did see a few birds, mainly feral. A grassed area at Darling Harbour was well covered by pigeons - maybe it had recently been reseeded. 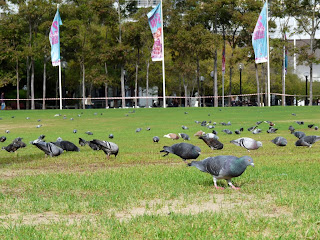 At Darling Harbour in Sydney we visited the Maritime Museum, and I was particularly taken with the exhibition of Darwin's voyage in the Beagle in the 1830s . It's very well done.

As we walked down to the exhibition room the passage wall was decorated with a stylised map of the voyage and quotes from Darwin's diary - it felt like you were 'sailing' the route of the Beagle. 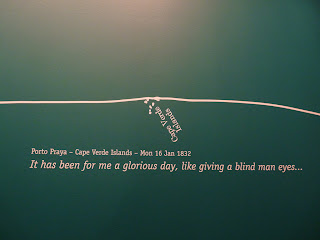 ...and it was fantastic to see some of the actual items collected on the voyage. These are some of the crabs he collected, now normally housed in Oxford University Museum of Natural History. It still amazes me that he was so interested in everything at such a young age.

Email ThisBlogThis!Share to TwitterShare to FacebookShare to Pinterest
Labels: Darwin 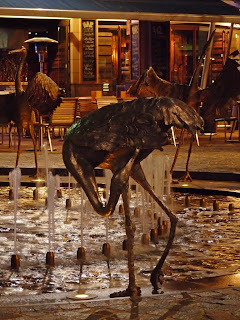 Snail wasn't the only blogger to see brolgas last week. I saw these at Darling Harbour in the centre of Sydney.
Posted by Boobook on Wednesday, June 24, 2009 No comments:

OK, we saw a few other things at West Barwon Dam - we weren't entirely one-eyed (though we're good at that given that we live in Geelong, the home of the Cats).

We got quite distracted from the fungi at one stage when an Otway Snail was found crawling up a clay bank. (Do snails crawl?) It's a big snail, with a shiny black shell, and this one was fully stretched out. When we disturbed it it quickly tucked away its eyes so we had to wait a minute or two for a 'photo opportunity'. This snail, Victaphanta compacta, is rare and Endangered, is found only in this rainforest and is carnivorous (it eats worms and other snails). We were amazed at how big its foot was. 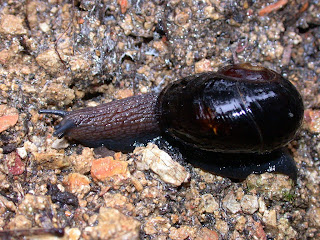 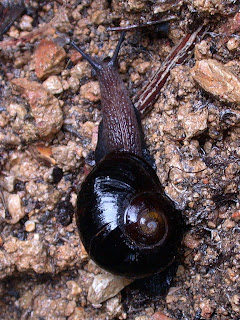 Variety is the spice...

Fungi with simple gills, fungi with forked gills, coral fungi, cup fungi and shelf fungi - so many different types and colours. We saw examples of all of them at West Barwon Dam. 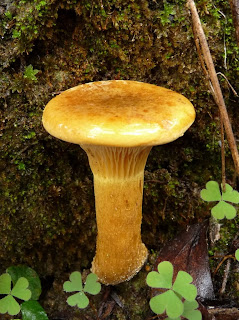 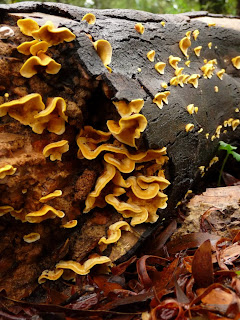 Don't know, but it's a bracket fungus 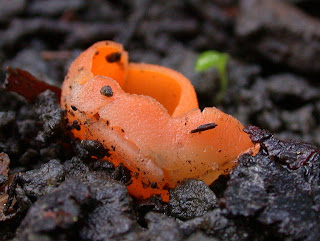 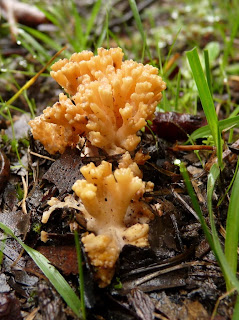 One of the coral fungi

Email ThisBlogThis!Share to TwitterShare to FacebookShare to Pinterest
Labels: fungi

In the bush near West Barwon Dam we found several types of jelly fungus on rotting logs, including a type of Tremella that appears to begin life as a yellow 'bud' like the one on the bottom right, and some yellow Jelly-bells. 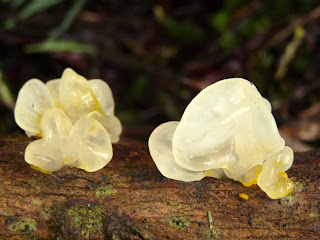 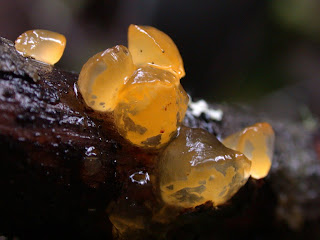 Email ThisBlogThis!Share to TwitterShare to FacebookShare to Pinterest
Labels: fungi

Decay in many forms 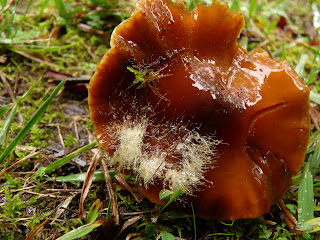 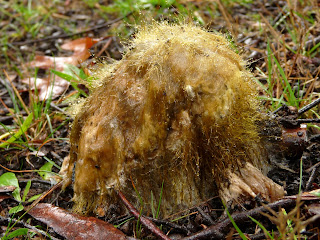 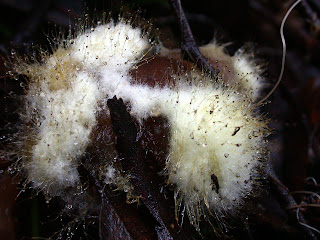 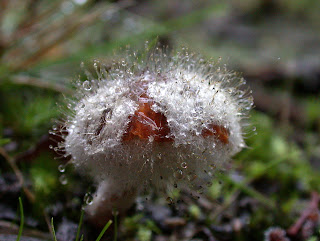 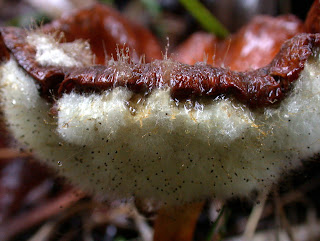 It's been raining in the Otways. This isn't unusual normally but in the last few years not raining has become the norm. So, because rain and wet forest equals fungi we packed our cameras, lunch and thermos and headed down to the West Barwon Dam at Forrest for the day.

We didn't have to walk far to find the fungi. It was everywhere, in numbers and variety. We had a fine time despite the drizzle and the occasional leech. Valda, Polly and I took hundreds of photos, Lynne took her binoculars to look for birds and a plastic bag to pick up rubbish but spent most of her time looking for fungi. We only got lost once.

I'll post some pretty pictures later but in the meantime here are some photos of some of the fungi we found covered in fungi or mould. I'll need to do some research to find out what is going on. Any suggestions welcome.
Posted by Boobook on Thursday, June 04, 2009 1 comment: