Flood mitigation seems to have been the main purpose. Do you remember seeing photos from several years ago when floods surrounded the town of Kerang in northern Victoria. Levee banks saved the town but the floods covered hectares of farmland. The water took a long time to drain into the Murray because the land is so flat.

I found this report on the Parliament of Victoria's website. It's called Inquiry into flood mitigation infrastructure in Victoria 2011. One witness stated:


The reorganisation of the Torrumbarry system was completed in 1969-70 with the dredging of the Pyramid Creek from Kow Swamp to the Kerang Lakes. This enabled flows released from Kow Swamp to reach the Kerang Weir pool in 36 hours instead of 3½ days. Throughout the 1990s all streams, creeks and low-lying areas that carried occasional water were cleaned by dredging.

Were there any protests at the time? Did everyone agree with the process? Didn't anyone think about the creatures and plants that lived in the waterways? And the floods weren't mitigated so was it all for nothing?

Maybe there has been a rethink. In the August 2014 edition of the DEPI newsletter Fish-e-fax I found this:


Thanks to $60 000 of funding from recreational fishing revenue, fish habitat in Pyramid Creek is set to be improved. Snag piles will be placed into the creek by the North Central CMA to provide native fish with shelter from fast currents, refuge from predators and sites for feeding and spawning. The project will help the waterway become a key pathway during fish migration and will boost the permanent population of native fish.

When I was five years old my parents built a new home on the farm and they chose Mount Gambier stone blocks. The blocks are large, sawn out of a limestone quarry in Mount Gambier, South Australia. Many of the homes in the city of Mount Gambier are made of the same building material - some are left the natural creamy colour, most are rendered.

The area was covered in a warm, shallow ocean 30 million years ago and the result is a thick layer of limestone formed when the remains of tonnes of sea creatures and corals dropped to the ocean floor. It has been utilised as a building material, road surfacing material. It has eroded into beautiful coastlines, famous caves, sinkholes and lakes.


Mount Gambier Limestone (fossiliferous limestone) originated from extensive colonies of bryozoa (or lace coral) that flourished on an open-marine shelf, formed over 30 million years ago. Its composition consists of bryozoa, foraminifea and echinoid spines and plates.

Last week we explored several areas along the coast. There are settlements (Port MacDonnell, Nene Valley, Carpenter Rocks, Pelican Point etc) dotted along the coast and all are linear, only several blocks wide. I'm not sure of the history but I'm guessing all started life as fishing shacks but the majority of the homes there now are very stylish and expensive-looking. Freshwater lobsters and fishing, diving and snorkelling are the drawcards. Apparently the fish and lobsters are in plentiful supply because of an annual event called the Bonney Upwelling which I had never heard of. Cool, nutrient-rich water surfaces along the Limestone Coast.


The Continental Shelf, which acts like a fish highway as it runs in an east/west direction off Portland and Port MacDonnell; and, the cold-flowing Bonney upwelling that pushes along the ocean floor before coming to the surface on the Shelf line. It is here that the all-important krill and other microorganisms gather. This starts an unbelievable food chain sustaining the smallest creature up to the biggest mammal on the planet. [Fishing Monthly] 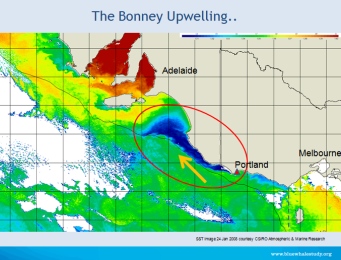 We should have allowed more time because there is a lot to see and do. We only scratched the surface. It was extremely windy when we were there and I think that's normal. Shipwrecks were normal as well. The coast was treacherous. I guess it still is. 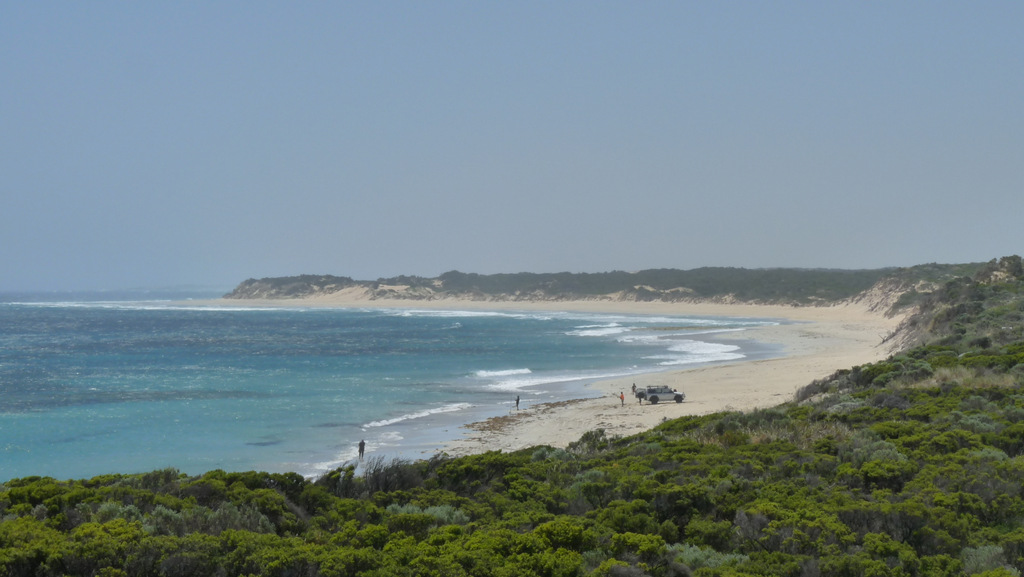 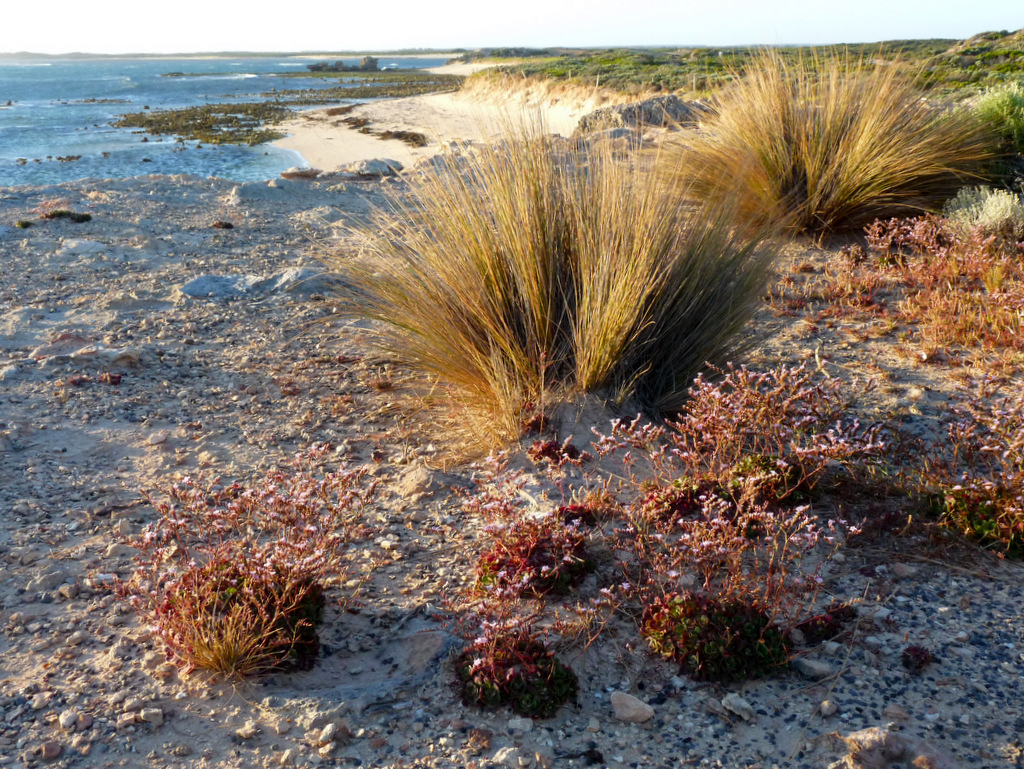 I seem to be on theme here with all things volcanic. So to continue...

Last week we explored the Limestone Coast of South Australia, the area south of Mount Gambier. I'll write more about the coast in the next blog but in the meantime it's hard to ignore the area's volcanic history because the two main mountains stand out from the plain. Mt Gambier and Mount Schank are the youngest volcanoes in Australia and are defined as dormant rather than extinct. They, and other volcanoes in the area, would have been quite a sight when active and there are local Aboriginal stories about the eruptions (thought to be about 5000 years ago).

In 1800 Lieutenant James Grant, on board the Lady Nelson, thought he spotted four islands but as the ship moved closer the islands evolved into two capes he named Northumberland and Banks and two mountains he named Gambier and Schank.

The Blue Lake holds water because the crater is below the water table whereas the craters on Mount Schank is above the water table and dry. Scientists have worked out why the water in the Blue Lake turns to a brilliant turquoise blue early in summer each year and if you're interested I suggest you follow this link.

Both mountains are maars, the result of the rising magma hitting shallow groundwater. Violent and spectacular. If another eruption were to occur in the area in the future it would cause widespread damage up to 100 km from the site.

Mt Napier erupted over several decades about 8000 years ago. The lava flowed into valleys and over the landscape forming a shield around the volcano itself. Scientists can date the lava flow that filled Harman's Valley with carbon 14 isotopes of the peat that formed in a swamp after the lava filled a valley.
Harman's Valley can be easily seen from a lookout on the road near Byaduk. And there are excellent information boards there as well. How else would I have known about isotopes!! 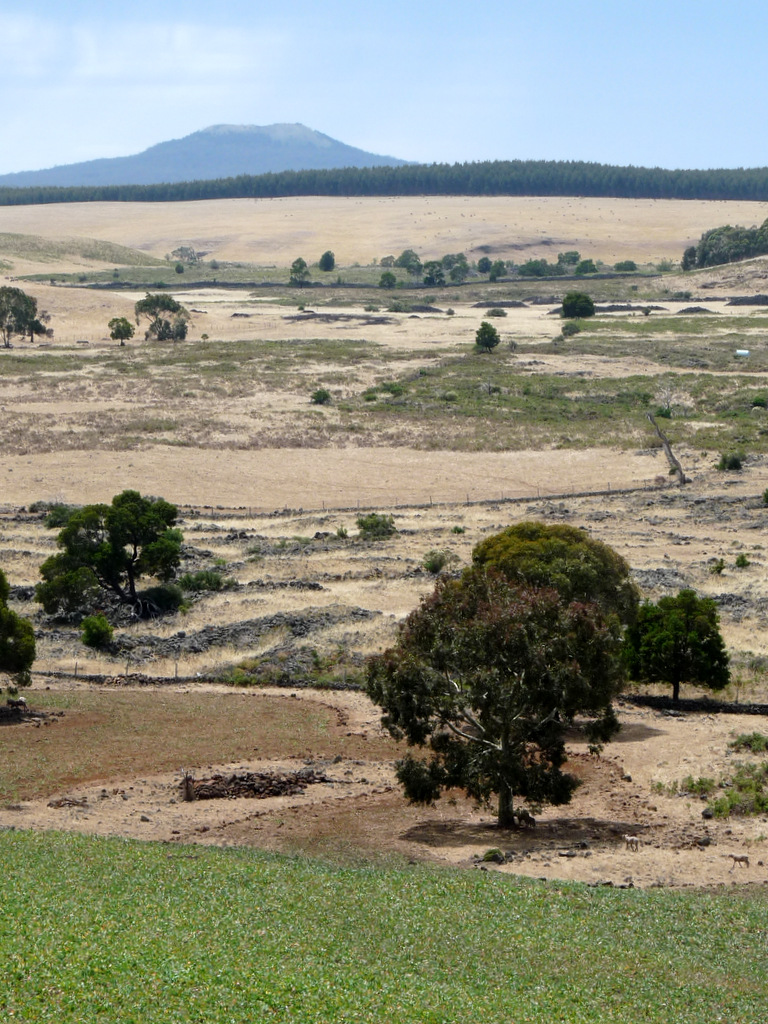 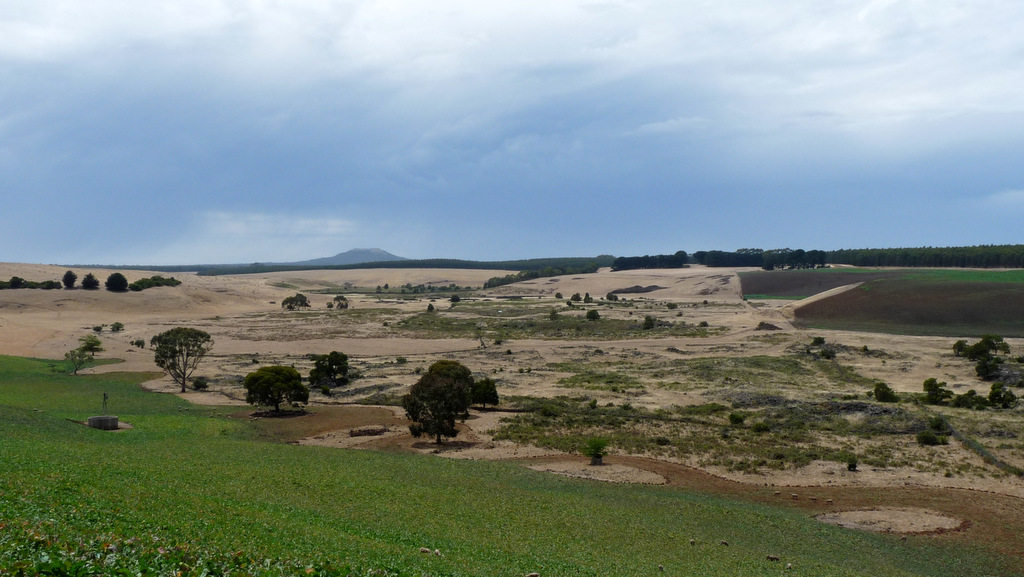 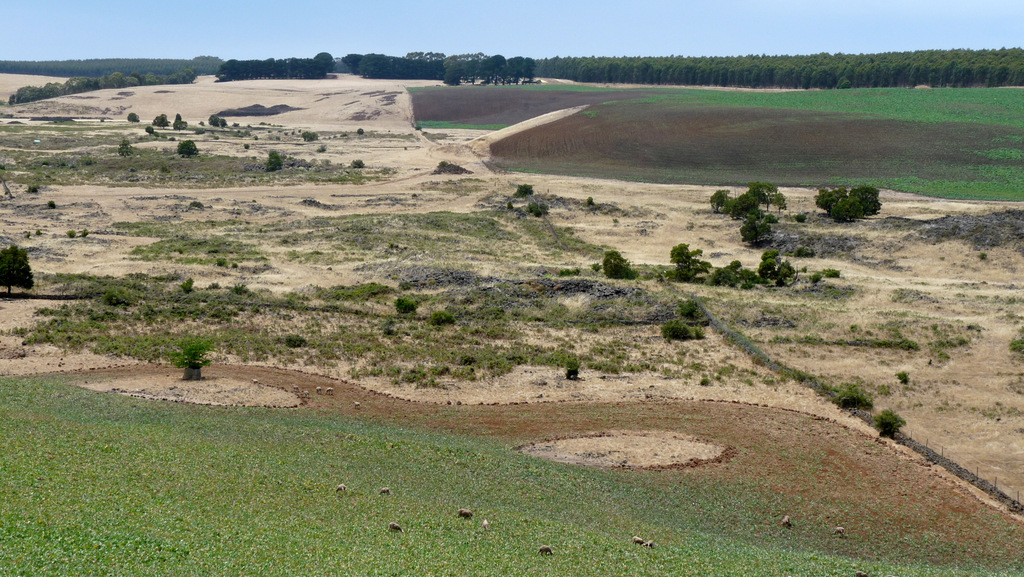 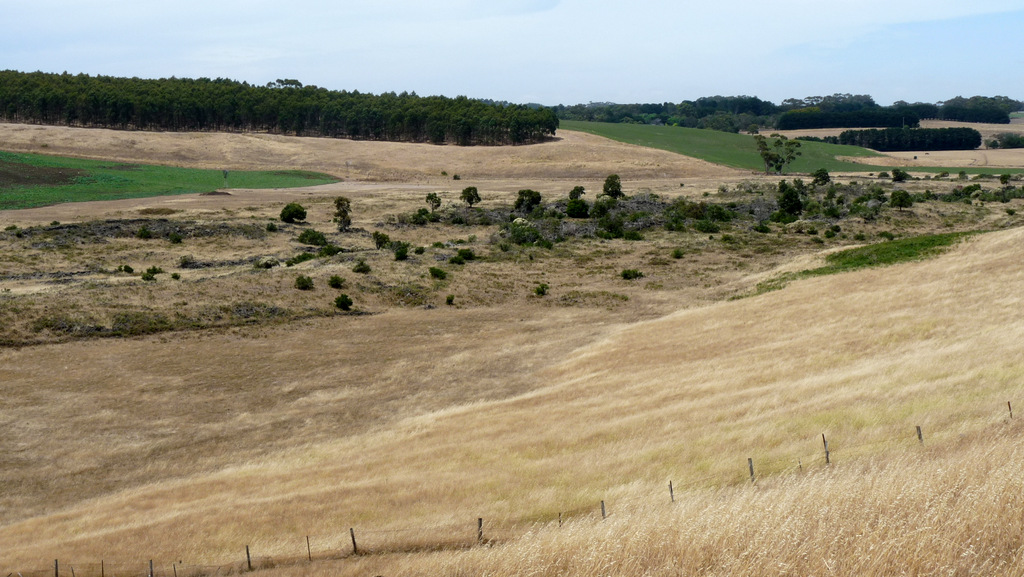 Posted by Boobook on Thursday, January 01, 2015 No comments:

It looked very different 8000 years ago. The local Aboriginals would have seen the lava slowly filling the valleys and spreading over the landscape in waves through several decades of eruption.

We now call the volcano Mt Napier (more about that in the next blog) but I went to see the blisters, the tumuli, that form on the surface of a lava flow when gases build up beneath the surface. The dome roof collapses and the sides remain. The blisters (on private property along Old Crusher Road) are excellent examples apparently and much bigger than I expected.. 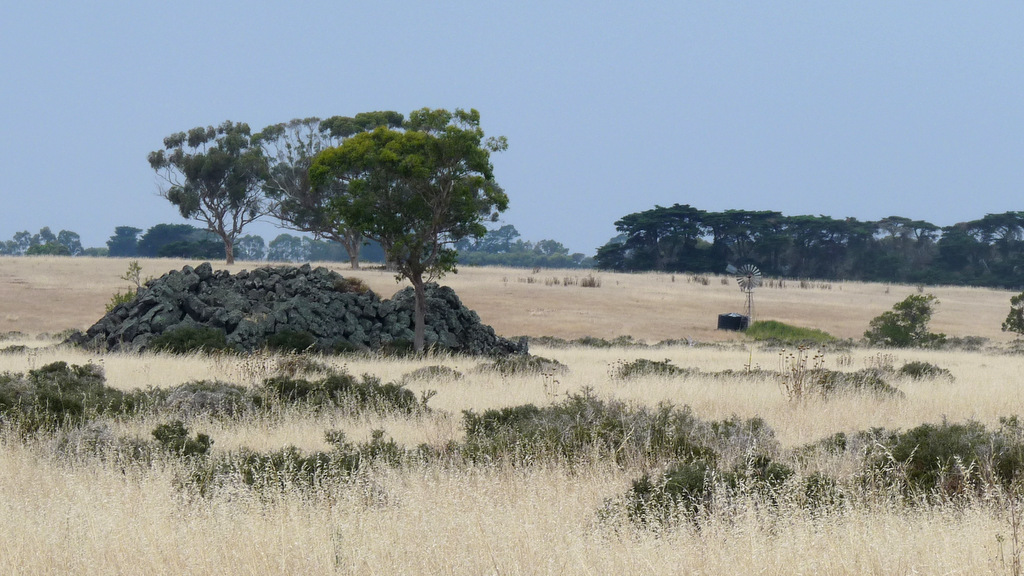 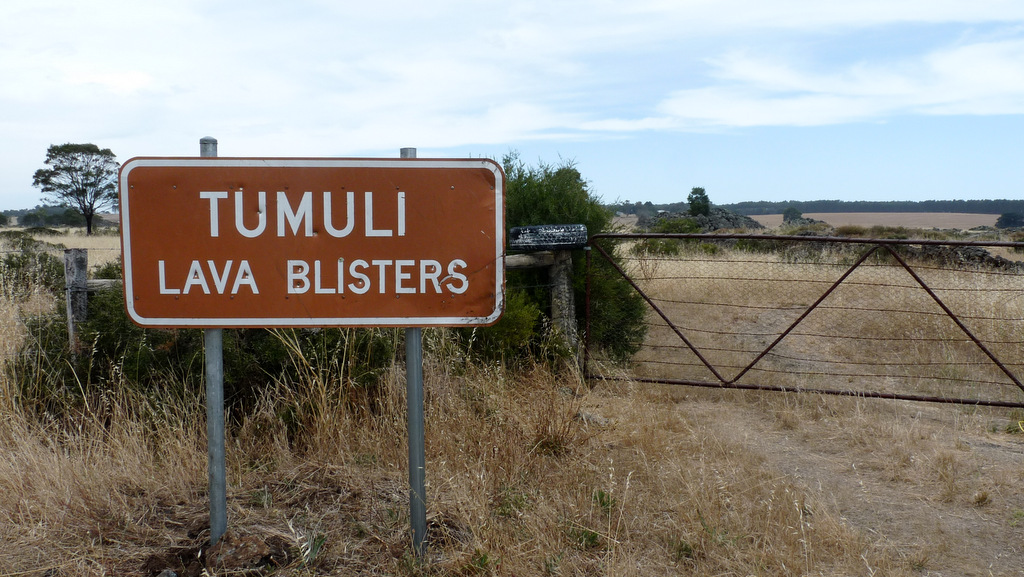 There are no information boards at the site but at the Harman's Valley site nearby there are several that explain everything very well. The tumuli site is not far off the main road but the signposts do not entice the tourists so it can be very easily go unnoticed. 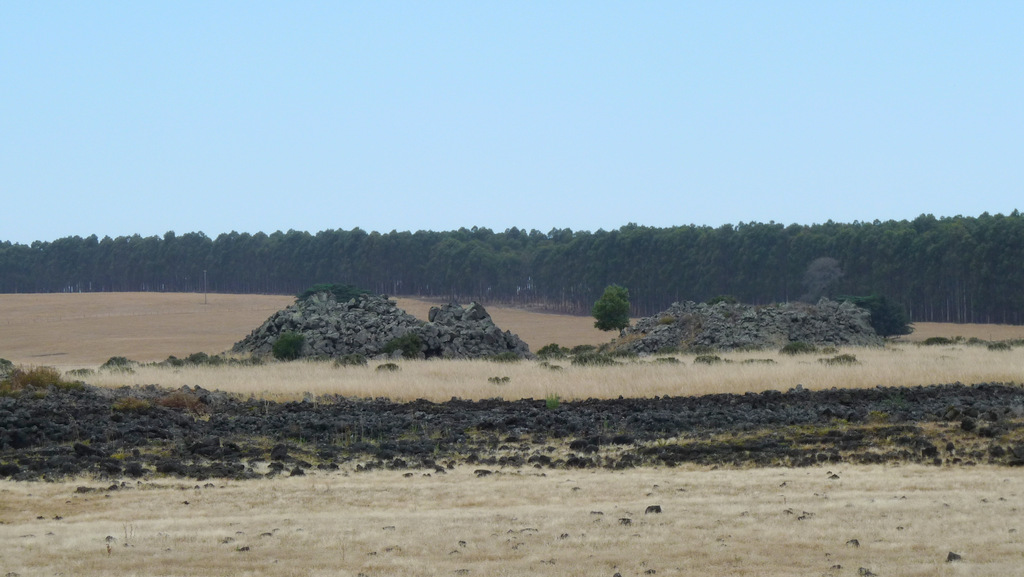 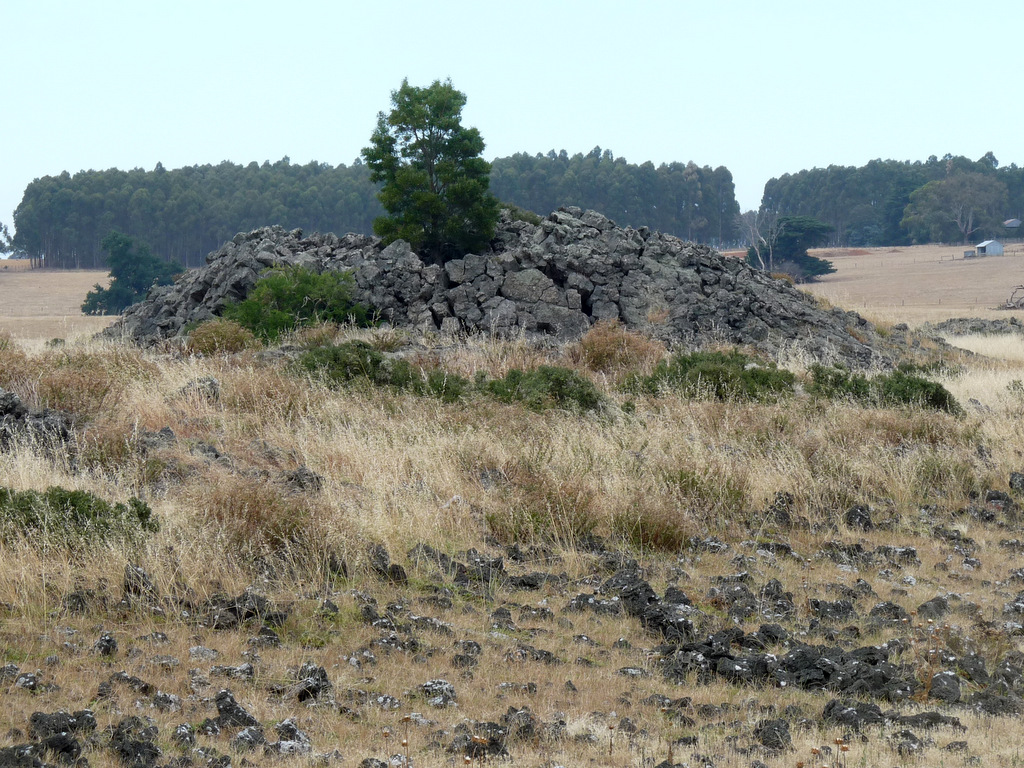 Posted by Boobook on Thursday, January 01, 2015 No comments: