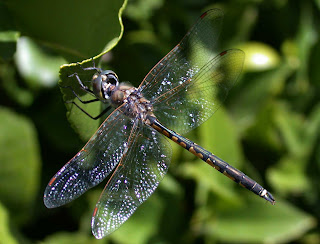 Last weekend we headed north, visiting Kerang in the north of Victoria. Unfortunately (from a naturalist's viewpoint, not a farmer's) it was wet (welcome), windy and cold and, as well, we were busy doing other things including actually talking to the family we were visiting!

Hence, not much in the world of nature to report. But I did see this beautiful dragonfly sunning itself on the lemon tree. I think it's a Tau Emerald Hemicordulia tau, not an uncommon species but rather late in the season to be out and about. On the dragonfly webpage there are several reports of them flying in April and May. Someone on my Flickr page suggested it is a young male and commented on their remarkable eyesight.

Email ThisBlogThis!Share to TwitterShare to FacebookShare to Pinterest
Labels: Dragonfly 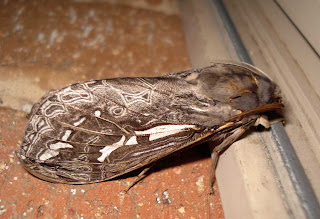 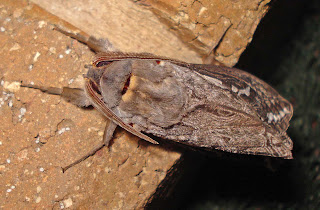 I opened the sliding back door and stepped into the living room and was greeted with "Did you stand on the moths?" I stepped outside again to investigate, and found several Swift (or Rain) Moths on my door step. We really haven't had very much rain, more like showers I'd say, but it must have been enough to encourage the moths to leave the ground. Hepialidae family, Trictena sp. maybe. One of you will know. It's worth clicking on the images to enlarge to see the antennae - amazing.

Email ThisBlogThis!Share to TwitterShare to FacebookShare to Pinterest
Labels: moth

Some of the spiders I found last week in the bush at Homerton, on foliage and under bark. I'm still working on IDs, as usual. Nothing's changed - I'm a slow learner. 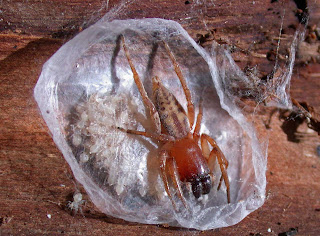 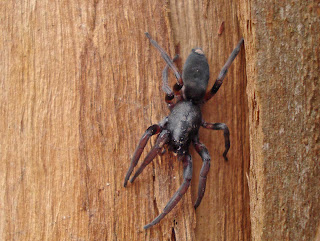 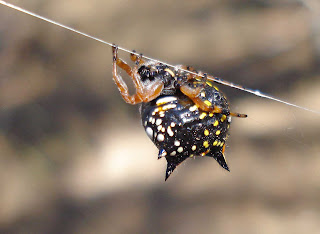 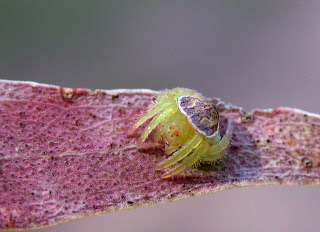 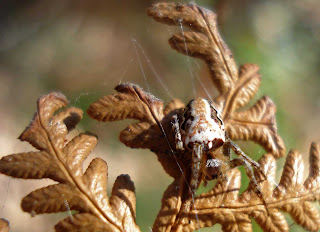 Email ThisBlogThis!Share to TwitterShare to FacebookShare to Pinterest
Labels: spiders

Not biting at the moment

I found this large creature sunning itself on a Black Wattle, but didn't know what it was until I read Duncan's blog. Now I think it's probably a winged bulldog ant, and Duncan writes about it so eloquently you should pop over and have a read. 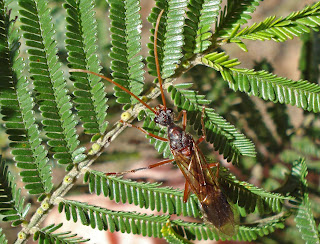 Email ThisBlogThis!Share to TwitterShare to FacebookShare to Pinterest
Labels: ant

Mothing in the day time

It was good to get out into our bush again - it's three months since we last went down to our farm near Heywood. It was dry of course, and every day over the Easter break was a perfect autumn day, sunny, warm and calm. The debris on the forest floor crackled under foot as I searched for insects on leaves and under bark. The mosses and lichens were pale and dry to the touch, there was no fungi at all and the only plant flowering was the banksia.

I did find a bit of wildlife, mainly spiders under bark, of which more later. But there were also a couple of moths. The first was sitting quietly on a leaf of a eucalypt and has a most unusual snout. Any ideas on what it is? The second is a beautiful Tiger Moth Asura lydia on a dead bracken frond. 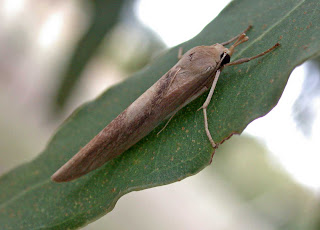 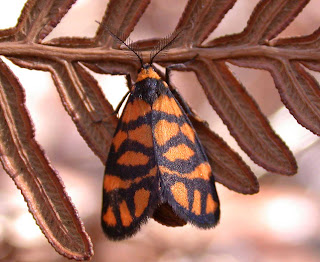 Email ThisBlogThis!Share to TwitterShare to FacebookShare to Pinterest
Labels: moth

I took myself off to see the 'Hidden in Plain View' exhibition in Geelong, featuring fungi, lichens, mosses, liverworts and hornworts with items, drawings and paintings from the State Botanical Collection (Royal Botanical Gardens Melbourne) and biographical details of the collectors and researchers. I expected to be impressed, and I was. But I didn't expect to be moved emotionally, and I was. The item that 'got' me was Ferdinand von Mueller's microscope that Joseph Banks sent out to him in 1857. Such a simple piece of equipment for such 'giant' men to use. Ferdinand is a giant in the world of Australian botany, and Joseph (I hope they won't mind me being on first name terms) a giant full stop. 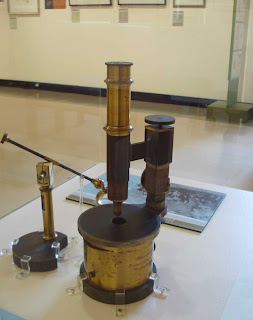