Kerang is bordered on one side by the Loddon River and by swamps on the other sides. In fact the town itself was probably built on a swamp. They have such imaginative names too - Back Swamp, Fowlers and Town.

Yesterday I explored Town Swamp again because the floods and heavy rains earlier this year have filled the swamps and they are a birdwatchers delight at the moment. Town Swamp has several well-maintained walking tracks, information boards, seats, picnic spots and a bird hide. Perfect. A section of the swamp abuts the Loddon River so there are two environments to explore - the treed river and the lignum swamp. And it is less than a kilometre from the town's centre. I saw an assortment of herons and ducks, a kingfisher (I think Sacred but I was too far away to be sure, and should it be here still anyway?), one Black-tailed Native Hen, and there were honeyeaters and pardalotes calling. 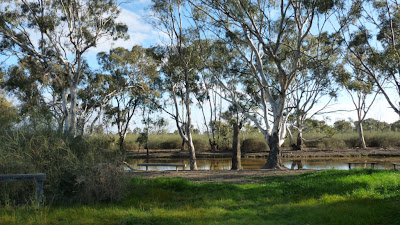 The Kerang Primary School maintains this picnic area on the Loddon River. Other service groups in town are responsible for particular areas along the path. 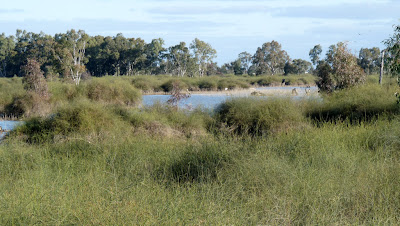 Email ThisBlogThis!Share to TwitterShare to FacebookShare to Pinterest
Labels: Kerang

Kerang Weir on the Loddon

The weir is on the Loddon River just north of Kerang and has been there for a while. My husband remembers camping out there when he was a scout, and that was quite a few decades ago!

I've seen it in many moods but today it was a torrent, comparatively speaking - for the last decade it has been almost dry because the Loddon stopped flowing in the drought. After the floods in January the water is gradually draining off the land so there was a strong current running today. 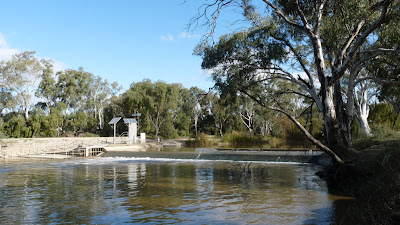 There is a new addition to the weir. It's a fishway. You can see it in on the left the picture above. It was installed a year or so ago and was the first on the Loddon. It allows fish such as Murray Cod and Golden Perch to move upstream and downstream along 46 kilometres of river whereas in the past the weir was a barrier. There are now better opportunities for spawning migrations, genetic diversity, feeding, shelter, and safety. Fish swim upstream through the fishway and exit above the barrier. 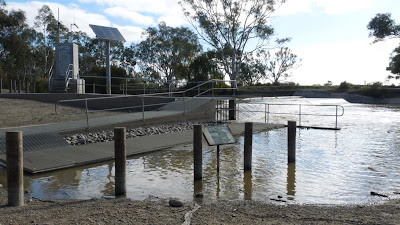 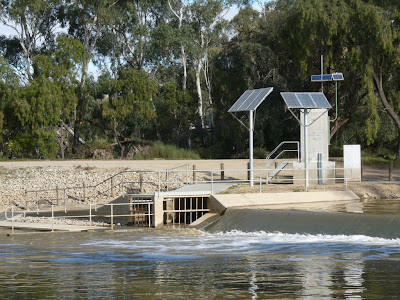 Kerang sits on a flood plain between the Loddon River and the Murray River and in mid-January this year the 'flood' part became a reality. All roads to the town were closed for over a week. Do you remember seeing aerial photos of Kerang as an island surrounded by an ocean of water? My parents-in-law elected to stay in their home in the town and luckily the levee banks held.

Amazingly some areas of the district are still flooded. The plain is flat and the man-made levee banks, roads, bridges and channels so disruptive of the natural flow so the water is taking a long time to drain into the Murray. There is a lot of angst here because properties, houses and incomes have been badly effected.

We drove out to Murrabit and Benjeroop to have a look at some of the damage. (Prince William's helicopter landed in the oval next to the Murrabit school when he visited a few weeks ago.) There was a giant temporary levee built on the Murrabit-Benjeroop Road that locals nicknamed 'The Great Wall' but when we saw it yesterday all of the soil has been pushed to the side of the road and levelled. It all looks very messy, muddy and bedraggled still. We could see many, many bales of hay that have been spoilt. Swamps that have been dry for decades have water in them, the lignum bushes are growing madly, birds are prolific. I've never seen so many White-faced Herons. It will be interesting to revisit in spring because the land has had a good drink and I imagine the vegetation will respond. 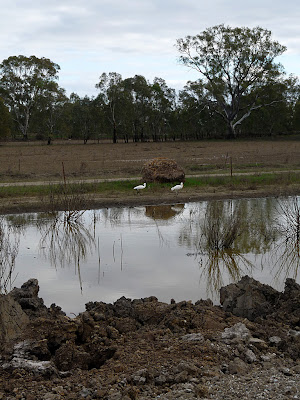 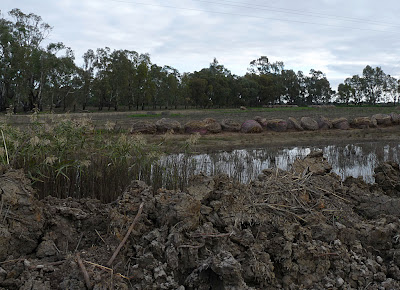 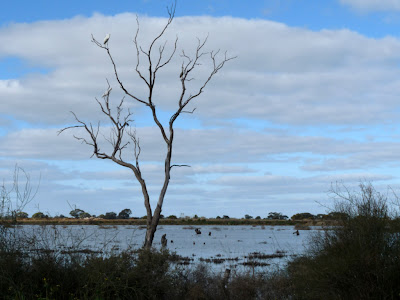 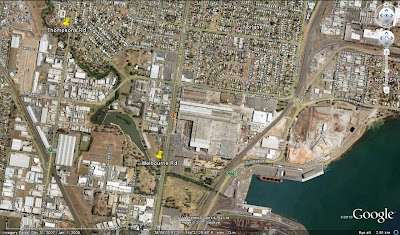 I was getting more and more depressed as I walked downstream alongside Cowies Creek in North Geelong. The sun was shining, the track well maintained, the lawns mown, the trees shady, even a few birds singing - so what was the problem? The creek itself. The section between Thompsons Road and Morgan Street is in very poor condition because of weeds such as Arum Lilies, Kikuyu Grass, rubbish, big storm water pipes directing who-knows-what straight into the creek and low water flow. The walking track is on  the north bank and industries line the southern bank. Damsel flies were patrolling. Helen S. has been checking the salinity of creek in this area under the Waterwatch scheme and last week they looked for macroinvertebrates in the muddy water. They found leeches, diving beetles, midge larvae, backswimmers, boatmen and damselfly larvae and dragonfly larvae. She noted that they didn't find caddis fly, sonefly, mayfly, beetle larvae, snails, water mites or crustaceans such as freshwater shrimps. 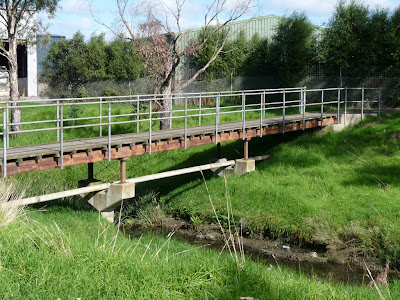 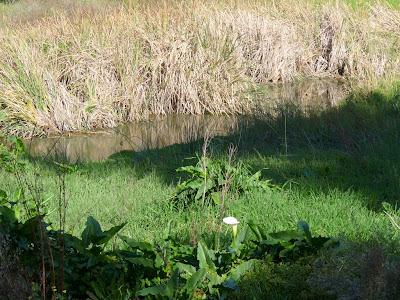 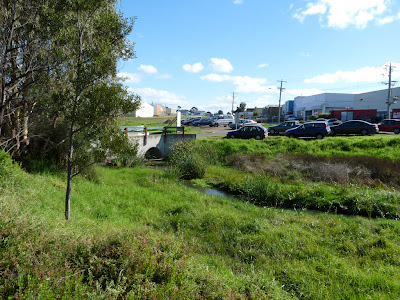 But then I crossed Morgan Street and everything changed. In the section between Morgan Street and the old Princes Highway/Melbourne Road Cowies Creek here opens up to a lake in a reserve called Seagull Paddock or Deppeler Park. I've lived in Geelong for 25 years and have to admit that I've never been to this lake. It's about 500 metres long with several islands and a walking track all around. Very pleasant despite the noise from the highway nearby. I saw an Australian Pelican, Silver Gulls, Pacific Black Ducks, Dusky Moorhens, Purple Swamphens, Masked Lapwings and, amazingly, a female Darter. The latest Geelong Bird Report lists these as 'moderately common' but actually they are reported from few places beyond the Barwon River where they started breeding a few years ago. Maybe this is a new breeding site. I think the lake is regularly stocked with trout. 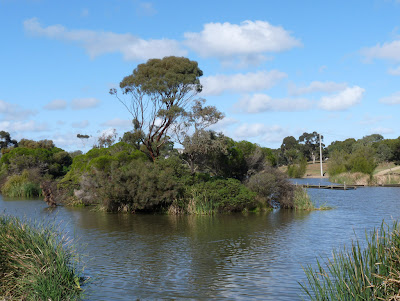 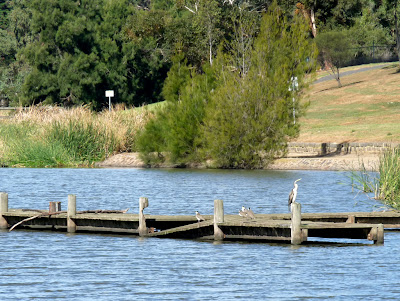 Downstream from the lake the creek again narrows and when it reaches the Princes Highway/Melbourne Road the footpath stops and I couldn't go any further. Here the creek has been directed into a pipe for a short section under the highway and a railway and flows out to sea at Corio Quay. In 1909 the creek's mouth was highly modified and is now a ship-loading port closed to the public. On the map, above, it shows as a rectangular shape. It would be interesting to look at an old map to see what it used to look like. I drove down Langdon Street to Crowle Street, past the heavy industries associated with a port, to a vantage point on the south side of the quay. Geelong's port is a busy port and this is only a small part of it. 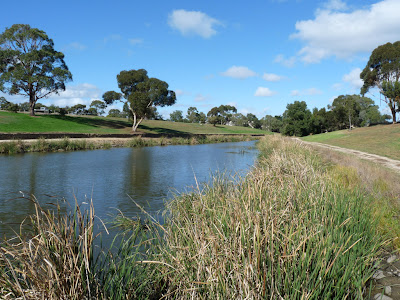 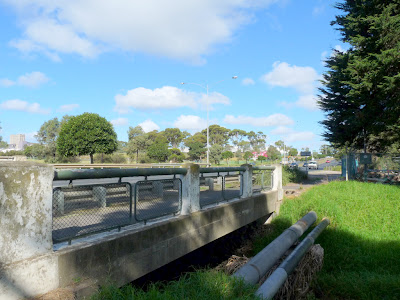 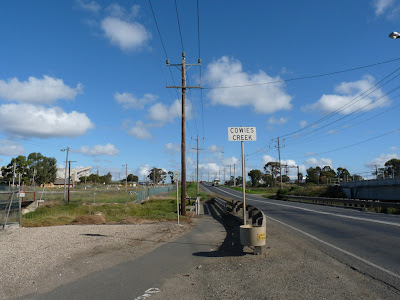 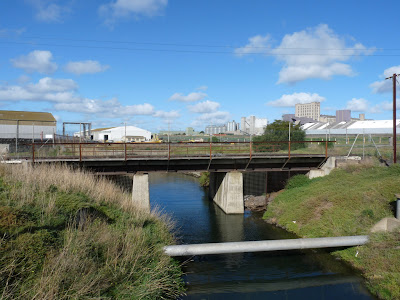 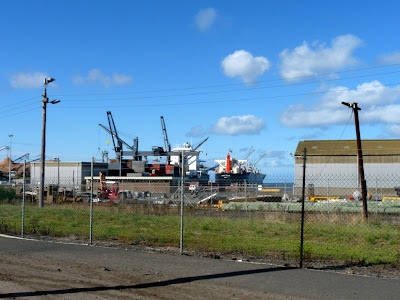 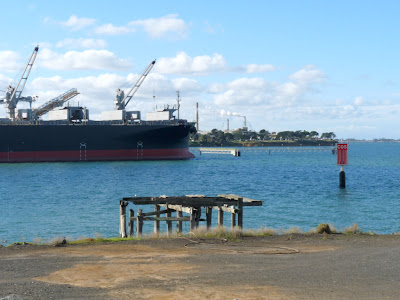