...Lake Condah was a lake, a big lake. It developed when lava flows from Mt Eccles (Budj Bim) flowed down the Darlot Creek valley and pushed the creek to the west. It all happened only 8000 years ago.

For hundreds of years the lake was a haven for life - fauna and flora. The Gunditjmara modified the lake a little by building eel traps for aquaculture.

In 1954 the lake was drained to mitigate flooding in agricultural areas north of the lake and for half a century the 'lake' was more or less dry. Local farmers grazed their cattle on the lake bed. Can you imagine the effect on birdlife, plants and aquatic creatures? The site was of huge significance to local Aboriginal culture but that was ignored.

The lake itself is owned by DELWP (except for a privately owned section in the north west) and the land surrounding the lake is owned by Mt Eccles National Park, the Gunditjmara and private property.

In 2004 the Budj Bim National Heritage Landscape was placed on the National Heritage List and is manged by the Gunditjmara people. This year there is a push, strongly supported by government, for the site to be recognised as a UNESCO World Heritage area.

In 2004 a restoration project for Lake Condah was commenced and in 2009 a weir was constructed, an "environmental bypass pipe, associated inlet and outlet structures, an automated flow control gate, and a 100 meter long rock chute incorporating a low flow fish passage", the design of which won an award for the construction company (Alluvium) in 2010. The project was a finalist in the Banksia Awards. The Museum organised a Bush Blitz there in 2011 and recorded many interesting plants and animals on the stony rises woodlands and the wetlands. The whole area is under the umbrella of the Clenelg Hopkins Catchment Management Authority.

Last week we went to have a look. It was a beautiful day, there was a lot of water in the lake and there were a lot of birds (numbers and species). Who needs to go to Kakadu when we have such a treasure in our own back yard? I didn't attempt a bird survey because a telescope would be essential.

There is still a lot of work to be done at Lake Condah. Weed control, fence post removal, monitoring of water flow and water quality and development of some tourist facilities (an amenities block was being constructed the day we visited). The Gunditjmara offer tours of this and other local areas of cultural significance. Go on. Treat yourself. 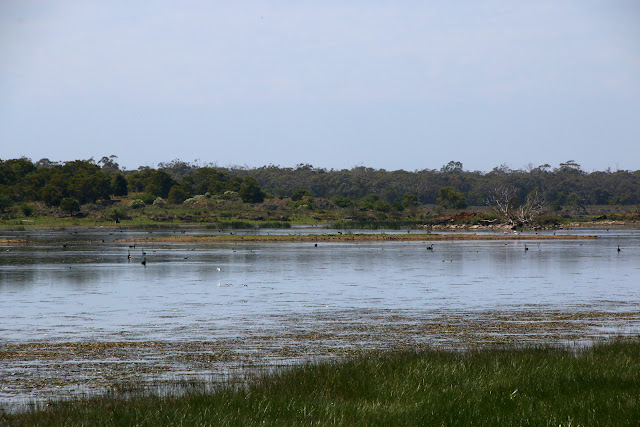 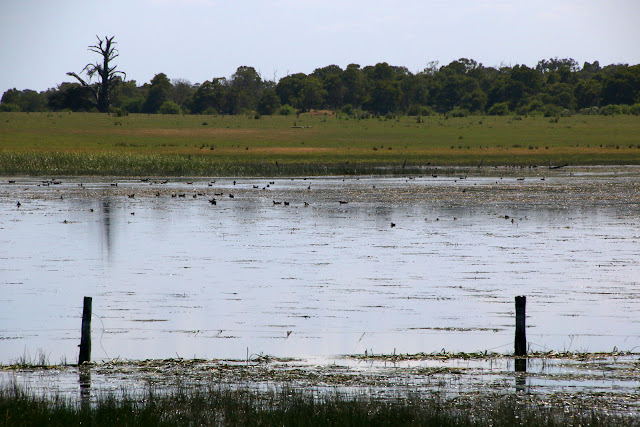 Posted by Boobook on Saturday, October 31, 2015 No comments:

It was the voice that drew my attention. A single little peep. What could it be? I couldn't place it at all.

Luckily the bird was in a small shrub next to the house and it soon revealed itself as it broke cover to attack its reflection in the window. Aha! A male Spotted Pardalote. Over the next two days the bird regularly returned to the same spot to attack the 'intruder'.

I wasn't surprised  to see a Spotted Pardalote, but I was surprised to see the yellow rump of the race xanthopyus. Morcombe's field guide says it "is found in sandplain mallee and drier open woodland". So why was it in damp sclerophyll forest east of Heywood in western Victoria? And if it was nesting where did it find a suitable spot on moist green grassy paddocks of  dairy farm with not a sandy bank or sandy ground within cooee? 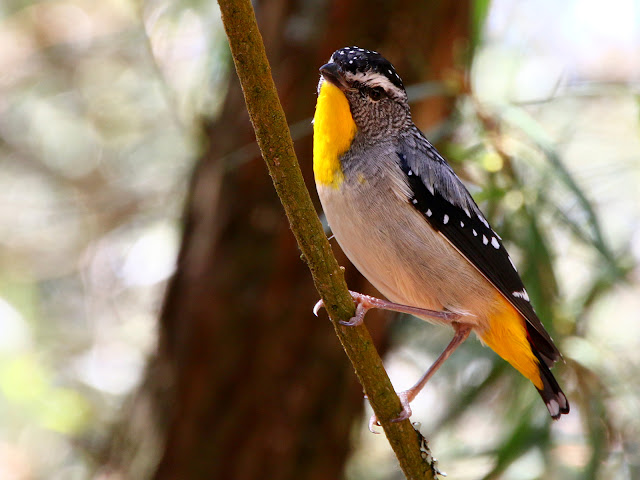 For about ten years I have been photographing the Darlot Creek at Homerton from the bridge on Coustleys Road. You can read previous blogs here and here.

Last week I visited the bridge again. The blue gums have grown quickly but they are not quite mature enough for harvest, the eucalypt on the bank is still healthy, there are still reeds and other great plants in and beside the creek. But I could hardly see the creek. The willows have grown so much the creek is clogged and shaded. It's sad to see the damage that willows can do and I fear that in the future there will be no point in maintaining this photopoint.

Which authority is responsible for the river? Do they have enough money in kitty to clear the willows? If they did find the funds I would tell them not take out the roots because that would cause too much damage. Just cut and paint. And I would ask that they remove all the debris because willow can grow from a stick. Please do it sooner rather than later.
Posted by Boobook on Thursday, October 29, 2015 No comments: