Is this a good spot to park?

Every year the Masked Lapwings nest on the university campus, usually choosing a spot in the middle of a lawn area. And every year the man mowing the lawns has to avoid the spot for a few weeks.

Well this year the birds have chosen to nest in a carpark, and every time someone walks past they have are warned off with a gentle scold. No doubt the warnings will be much noisier when the chicks hatch. 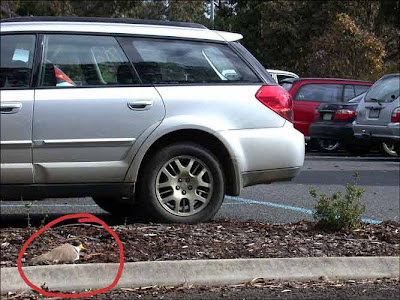 Email ThisBlogThis!Share to TwitterShare to FacebookShare to Pinterest
Labels: Lapwings

News flash! The You Yangs are disappearing.
Well, it will take a while, but wind and rain have been eroding the You Yangs for millions of years and are still doing so today. The resulting sand is deposited in pockets at the base of the rock. In fact there is so much of it that it has been mined to help build the Melbourne-Geelong stretch of the Princes Highway. 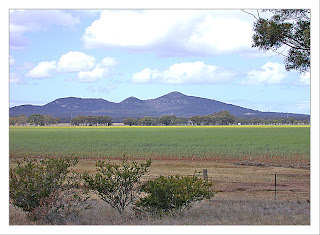 The You Yangs are a landmark in the district. They stand about 350 metres above the plain but it wasn't always like that.
Some people think that the hills are an extinct volcano but not so. This is what actually happened. When this whole area was under the sea, magma pushed its way upwards towards the surface but didn't break through. It started to cool very, very slowly until it was a rock called granite. (Geologists can look at granite under a microscope and see the large crystals of quartz and feldspar that form when the magma cools slowly. If it had been on or near the surface, and cooled quickly, the crystals would be much smaller.)
Then came a long period of time when the earth was much cooler, and as the ice caps grew the sea level dropped. Sediments on the exposed land eroded away leaving the granite that we now call the You Yangs exposed as a rocky island, surrounded by a shallow sea. Sea levels continued to fall, and then the surrounding area was subjected to a great deal of volcanic activity.
All of this took about 400 million years, an impossible length of time to try to imagine. Here endeth the lesson.
It's worth visiting the You Yangs to check out the flora and fauna. Local naturalists get excited by what they find there from time to time. And it's worth climbing Flinders Peak (in 1802 Matthew Flinders was the first European to climb the You Yangs) - the views are fantastic. You'd better plan a visit before it disappears!
Posted by Boobook on Tuesday, July 24, 2007 No comments:

Email ThisBlogThis!Share to TwitterShare to FacebookShare to Pinterest
Labels: You Yangs

I had to laugh. It was David and Goliath, the wimps outwitting the bully.
Last week all of the Swamp Gums Eucalyptus ovata in the bush at Homerton were covered in blossom and the birds were out and about to take advantage-numerous flocks of lorikeets and honeyeaters. In one part of the bush each of the flowering trees had a resident Red Wattlebird noisily defending its food supply.
I watched in amusement as a flock of White-naped Honeyeaters used a great strategy to grab a snack on their way through the canopy. They would land as a flock in a Swamp Gum, and as the 'resident' wattlebird flew madly around the canopy ejecting them one at a time the rest of the flock would be on the other side of the canopy having lunch. After a few minutes the whole flock would then move off to annoy another wattlebird.
I wonder what the signal is for the whole flock to move on? And is there a boss bird that decides which tree they're going to descend onto next?
Posted by Boobook on Saturday, July 21, 2007 1 comment:

As I walk through our bush block at Homerton I am aware of the past as well as the present.
I imagine the local Gunditjmara people hunting, and fossicking for food - they probably never camped there because Darlot Creek and Condah Swamp are just over the hill. The bush then would have been less dense than it is now because it would have been burnt more frequently by the Aboriginals, and the older residents in the area have told me that they could easily ride through the bush on horseback when they were children.
I imagine the previous owners, Ted and Dorrie, planting their 'taters' in the open, flat and fertile swamp areas in the bush. Ted told me he harvested many bags of potatoes there over the years.
I imagine the Robertson's house, built next to a swamp in the bush in the 1870s, burning to the ground. There are only jonquils and rocks at that site now, but they probably had vegetable gardens, a horse paddock, a track to the swamp for their water. I have a copy of the letter Mr Robertson wrote to the Lands Department explaining that he was late paying his debt to them because of the cost of the fire.
I imagine the timber cutters cutting down the tallest and the straightest trees to take to their mills.
I imagine the early owners ringbarking the trees, for firewood and to open up the canopy before the trees were cleared from the paddocks. In our bush there are still old trees that bear the scars of the axe. They must be old because we have owned it for over 30 years and I would have thought saws (cross-cut or chain) would have been used for a while before that. Many of the old trees also bear the scars of fire, the new bark enclosing the burnt bark. 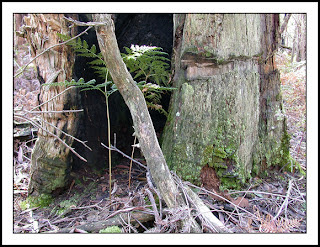 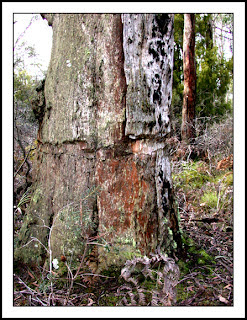 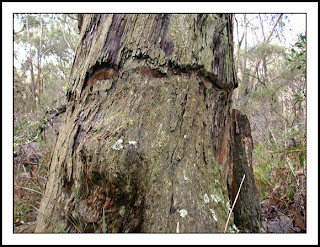 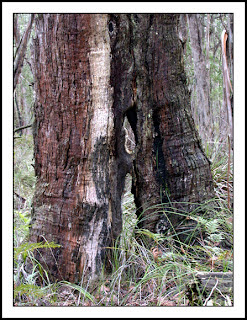 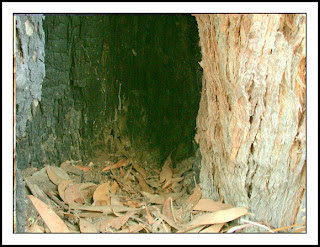 I remember my own family exploring the bush, walking or riding through on motor bikes, exploring the old house site, looking for koalas, birdwatching, building fairy houses out of moss, cutting wood for our log fire.

My attitude to the bush has changed considerably over the years but at all times it has given me pleasure. I don't feel that I own it - I thinks it owns me.

Email ThisBlogThis!Share to TwitterShare to FacebookShare to Pinterest
Labels: trees

I was fairly sure I would find what I was looking for. There is a group of Black Wattle Acacia mearnsii growing on our bush block at Homerton and in previous years I had found the Vegetable Caterpillar Cordyceps gunnii growing under them, so that was where I headed. Cordyceps are wonderful fungi and I love showing them to the uninitiated, especially children. There is a lovely sense of horror and disgust mingled with astonishment when they see a fungus growing out of the head of a large dead caterpillar, a moth larvae. We were expecting a family of children to visit hence my reconnaissance. I was pleased to find them growing in abundance under the wattles. The pleasure was doubled when I found the colony of Trim Orchids nearby. This area is entirely natural regrowth as a result of putting up a fence about twenty years ago to keep stock out, so its very rewarding to see nature getting back to business. 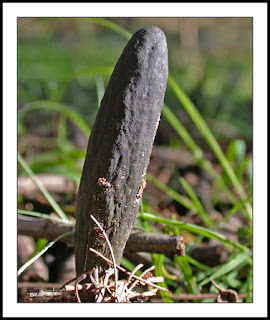 Next day, armed with a spade, I took the boys down to do some 'excavation', and was astonished to see that a lot of the fungi had been pulled from the ground. They hadn't been eaten but there were very few with the caterpillar part still present so I'm puzzled.

Now a true naturalist or scientist would have gone back at night with a spotlight. Not me. I was already exhausted from sitting up too late to watch some mad bike riders race around Europe.
Posted by Boobook on Sunday, July 15, 2007 2 comments:

Email ThisBlogThis!Share to TwitterShare to FacebookShare to Pinterest
Labels: Cordyceps

A is for 'almost erudite'

I was tempted into testing myself at this website (link below) and scored an 'A'. I needed the boost to my confidence because I had missed a word today when I was editing this month's Field Nats' newsletter. I didn't know that clamour and clamber were two different words!!! Just as well I have a proofreader. Thankyou Deborah.

Email ThisBlogThis!Share to TwitterShare to FacebookShare to Pinterest
Labels: words

Two for the price of one

Re my last blog: I've been reading about worms to find out if they do in fact regenerate if they are cut in half. This is what I've learned.

Now I have to finish reading Amy Stewart's very interesting, delightful and engrossing book The Earth Moved: On the Remarkable Achievements of Earthworms. And then I'll return it to the library for someone else to read. Aren't libraries great?