A little about Little Ravens

For the first time in more than twenty years we have the pleasure of Little Ravens nesting in our suburban garden. They've chosen to nest in the Eucalyptus leucoxylon subsp. megalocarpa, a Yellow Gum, that is growing only a few metres from my back deck.

At the moment the adult birds are feeding their young but what is interesting is that if I hadn't noticed the birds actually picking up sticks to build the nest I probably wouldn't even know the nest was there. The birds are so tricky, approaching the nest from a perch on the neighbour's roof after they have checked out the possible dangers. The young birds hardly make a noise and the parents are quiet as well.

It got me thinking about young ravens. We're used to seeing young magpies begging noisily for food but I can't remember ever seeing or hearing a young raven begging. We're used to seeing young magpies dead on the road but I can't remember ever seeing a dead young raven. It will be interesting to see if I manage to see the young ravens when they first leave the nest. I suspect I will miss it because their parents are so intelligent and sneaky, but it would be nice if they could hang around our yard for a while so we can see them.
Posted by Boobook on Saturday, August 24, 2013 No comments:

Every May, during the school holiday break, mum and dad would pack the van and pack us kids into the Holden station wagon or the Ford Customline and off we'd go.

I'm talking about the 1950s-1960s. Our van had two double bunks down one end and the table folded down to make a double bed. The car never had seat belts and the front seat was a bench so there were always lively discussions about who would sit where. We were always extremely excited, rushing to get off the school bus and running home to see the van packed ready to go. May was the month because the dairy cows dried off then, leaving mum and dad free from the milking routine for a few weeks.

We didn't go out of the state of Victoria. I remember holidays in the Grampians, Gippsland, central Victoria, the Murray and Bright. On one trip to Bright, I was probably about ten, I remember seeing this huge dredge at Eldorado across the paddock. I don't remember actually getting close to it but last week we did. This time the car is bigger and so is the van but there were only two of us and there were no arguments about not having enough room. We visited the Eldorado area in north-eastern Victoria because some of my ancestors were gold miners there in the 1800s, scratching out a living in the alluvial sands along the valley of the Reedy Creek near where it intersects with the Ovens River. And while we were in Eldorado we drove out a couple of kilometres to see the dredge.

Cock's Dredge at Eldorado was the largest in Australia when it was launched in 1936 and it operated until the early 1950s. Launched is the right word because it floated on its own pontoon in its own pond. 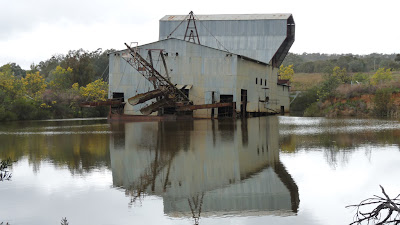 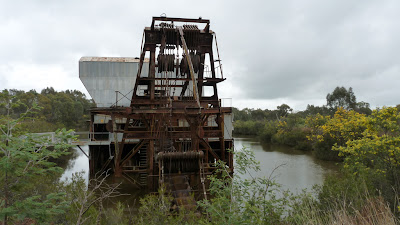 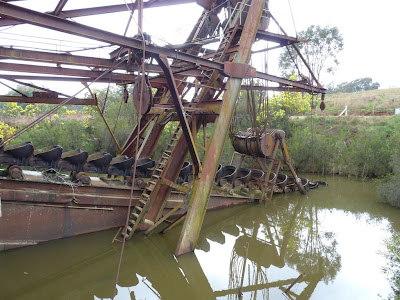 Today it is no longer floating but there is an 800 m walk right around the pond with information boards at various spots, and also on board (in a limited area). It's an impressive piece of industrial machinery ... but. There's a but. Can you imagine the working conditions on board as the huge metal buckets nibbled away the the ground in front, tossing the sands and gravels on board to be sifted and filtered for gold before spewing them out the back to recreate solid land again? Can you imagine the noise? Apparently it could be heard ten kilometres away and they worked three crew shifts so it would have been continuous. Can you imagine the damage done to the environment in the valley as the huge dredge ate its way along, creating its own pond as it went? A local bloke, Ken Greene, has mapped the route of the dredge over the eighteen years it was in operation and it is quite impressive - it did a loop in the creek bed near the town before heading downstream for several kilometres - but, according to the information board, the environment along the creek was already very badly damaged or highly modified because of gold mining operations over the previous fifty years or so.

Apparently there's still a lot of gold in the area but it's not profitable to mine it. My ancestors never struck it rich but it must have provided a living because they stayed in the town.
Posted by Boobook on Thursday, August 22, 2013 No comments:

We were in Albury last weekend and when you're in Albury you drive up Monument Hill to view the view. And the monument itself is worth looking at as well. It was built in the 1920s to commemorate the WW1 soldiers and has an art deco style.

But what really caught my eye was butterflies. I was amazed to see about six or eight Australian Painted Ladies Vanessa kershaw, all males, flying rapidly and low over the vegetation and basking in the sun. There were probably many more because the memorial is in a bushland reserve and we only saw a very small section of it. I presume the butterflies were hilltopping, establishing territories, but I must admit I hadn't expected to see any in mid-August. My first butterflies for the season.