Hands up for the Woolly Teatree

There is a tall shrub that grows in swamps and along watercourses in south-eastern Australia and in my lifetime it has become much less common. It's the Woolly Teatree Leptospermum lanigerum.

The 'lanigerum' part of its name refers to the woolly (hairy) capsules and leaves. It has a a silvery appearance. In fact its other common name is Silky Teatree. The references call it 'common and widespread' and it is a plant used a lot in regeneration and restoration projects so in no way is it a threatened species but what is under threat is their favoured habitat. Farmers for generations have drained swamps and allowed stock to graze along river banks and in wet areas. My father was a dairy farmer and one paddock on our farm was a Woolly Teatree swamp when I was a child. Dad allowed his cows to graze the paddock and subsequent owners have as well and now there are no teatrees left.

Some farmers are doing the right thing and fencing off swamps and creeksides. Organisations like Landcare, Greening Australia and Catchment Management Authorities are providing funding for fencing in some cases. But I fear it is too late for some populations of Woolly Teatree. In the photo, above, the swamps beside the Crawford River at Hotspur are full of water at the moment and the Woolly Teatrees must be loving getting their feet wet. But there won't be much regeneration because this particular patch (and others like it) is not fenced off and teatrees rely on a 'cool' fire to release the seeds from woody capsules.

It's late September and normally I wouldn't be looking for fungi but this last winter in southern Victoria has been wet and the mosses, mulch and logs are all still saturated so some of the fungi are still happy to send up their fruiting bodies to the air. And not only fungi. There's a whole other Kingdom called Slime Moulds and I've found some of them as well.

These are some that I've seen in the last week or so.

With a name like 'glanduligula' you would expect it to be covered in glandular hairs and so it is, except for the flowers. They are a very small plant of the heaths in southern Australia. The leaves form a very pretty flat basal rosette and if an insect lands on them it is trapped on the glands and its nutrients absorbed by the plant. The Scarlet Sundew is a carnivorous plant.

The flower is a beautiful orange-red colour but because the plants are so small it can be overlooked. I like the styles in the centre of each flower of this sundew. There are only three, and they are divided at the tip.

Compare the styles with those of the Climbing Sundew Drosera macrantha and Scented Sundew Drosera aberrans. Both plants also grow in southern Victoria.

There's a small perennial shrub, about 40cm high, that flowers in the Brisbane Ranges and in heathland near Geelong called Rhytidosporum procumbens White Marianth. I don't know the origin of the word 'marianth but several sources suggest it means 'Mary's flower'. procumbens means 'lying on the ground' and Rhytidosporum means 'wrinkled seed'.

In the past it has been called a Billardiera and Marianthus and a Pittosporum but in 1862 von Mueller, the Government Botanist in Victoria, transferred it to the genus Rhytidosporum, but it remains in the Pittosporaceae family.

The White Marianth thrives on poor soils of south-eastern Australia but can be easily overlooked and many people would be struggling to name it. The leaves are interesting because some, but not all, have three teeth on the apex.
Posted by Boobook on Saturday, September 16, 2017 No comments:

It's officially spring but the last week has seen driving rain, hail, snow in the Otways and strong winds. But today the sun was shining so I went to some heathy areas near Anglesea to see what was flowering.

I wasn't the only creature out and about. This caterpillar was on a Hakea shrub. I think it's a Oenochroma vinaria.


And a Scorpion Fly was just hanging about like they do. It looked like it was caught in a web but soon flew on to a new spot.


There were mosses and lichens, several types of orchids flowering and a few other plants as well but the flush of spring has not reached us yet.

Posted by Boobook on Saturday, September 09, 2017 No comments:

I am very familiar with the small shrub called Pink-bells (Tetratheca ciliata) because it is common in the forests of southern Victoria. Sometimes familiarity means you end up hardly noticing them even though they are a beautiful colour.

They're very demure little flowers despite their colour because they always hang their heads.

The majority are pink but I have found white ones occasionally and they are very beautiful as well.


Pink-bells will start flowering very soon but this week I was in the Brisbane Ranges near Geelong I noticed and photographed a very dark pink plant that I thought was Pink-bells until I had a good look at it on the computer later.

Turns out it was Tetratheca bauerifolia Heath Pink-bells, a plant I'd never seen before and didn't even know existed. It's natural habitat is stony hills so the Brisbane Ranges National Park is the perfect spot for it. It has the same shy habit as T. ciliata but the leaves are in whorls around the stem and it is a shorter plant. The flowers are a much darker pink.

And now I've found out that there is another beautiful Pink-bells plant in the Brisbane Ranges, Tetratheca labillardierei Glandular Pink-bells, so there's no way I'm going to ignore pink-bells when exploring the ranges again.
Posted by Boobook on Monday, September 04, 2017 No comments:

OK, I know I've missed the official Wattle Day by 'that much' but yesterday I was in the Brisbane Ranges National Park and the wattles were flowering in massed beauty everywhere.

The most prolific is Acacia pycnantha Golden Wattle. It lined every road we travelled and is spread throughout the National Park. It's Australia's floral emblem.

Another common wattle is the Myrtle Wattle Acacia myrtifolia. It has a shorter habit than the Golden Wattle and are often growing beneath them. One of the easiest way to identify them is to look at the leaves to see if there is a gland on one edge. In the photo below you can see this in the leaf at bottom left. I have to admit I'm just a little bit biased against Myrtle Wattle just because they look untidy. I know. I'm working on it and may need to consult a therapist.

There is another wattle I'm ambivalent about. Acacia paradoxa Hedge Wattle is very pretty but it is also very spiky and it can be a bit weedy. Hence the common name 'hedge' I suspect.

Another wattle I found was the Ploughshare Wattle Acacia gunnii. This wattle is a low shrub with pale flowers and the leaves are a really interesting shape.

There are about 12 more species of wattles that have been recorded in the Brisbane Ranges. I'll have to go back for another look and try not to get distracted by orchids.

Posted by Boobook on Saturday, September 02, 2017 No comments:

Some orchids in the Brisbane Ranges

We've been home a few days and today was the first chance I've had to go bush to see what is happening locally.

First I went to the Bert Boardman Picnic Reserve at Steiglitz, because the walking track behind it is usually interesting, and then to near the intersection of Switch Road and Ballan Road. The wattles were looking spectacular, Acacia pycnantha in particular, and there were several other interesting plants that I'll post about later but of course the orchids were flowering and they do tend to hog the limelight. 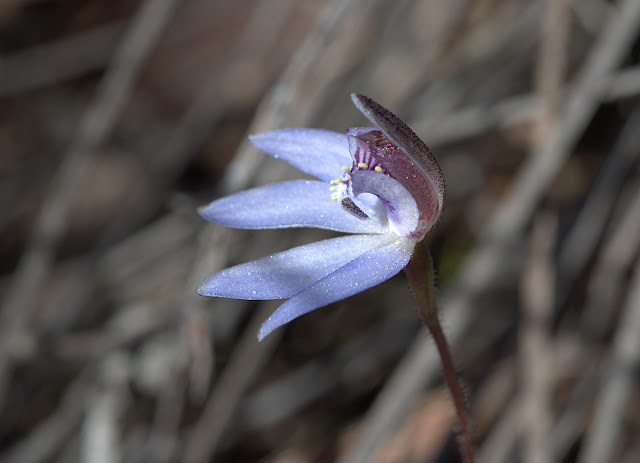 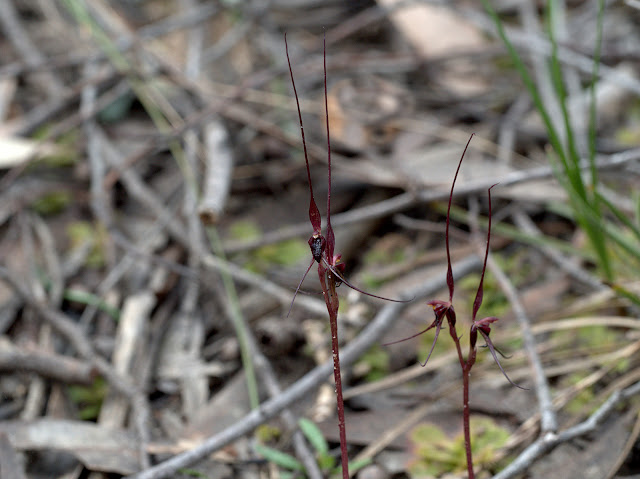 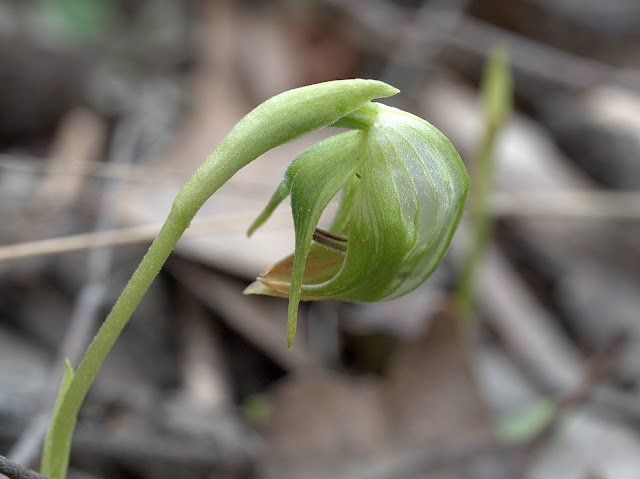 
The Small Gnat Orchids and Mayfly Orchids were prolific but very hard to see. It's easier to look for the leaves and then the flowers.

I was very pleased to find one orchid in particular. I thought at first it was a Tall Greenhood but on closer inspection it was an Emerald-lip Greenhood. Apparently smaragdyna means emerald-lip in Ancient Greek and refers to the colour of the labellum.

Posted by Boobook on Saturday, September 02, 2017 No comments: