I discovered this in Museum Victoria's blog about dragons to celebrate the Year of the Dragon. 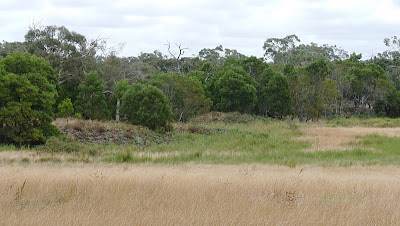 Recently, a few thousand years ago, Mt Eccles erupted and lava flowed slowly to the south in a fairly narrow band that we now call 'the stones'. It's a very rocky area and the dominant trees are Blackwood Wattles and Manna Gums.

Geologically it's a very interesting area and there is a diverse range of flora and fauna found there as well. The most recent survey, based at Lake Condah, was done by the Bush Blitz team from Museum Victoria. A large part of the lava flow area is now reserved in Mt Eccles National Park or Indigenous Protected Areas (Caring for Country) on the Darlot Creek at Budj Bim (Lake Condah), Kurtonitj (Homerton) and Tyrendarra. Some, like the property above and below, is still privately owned and grazed. 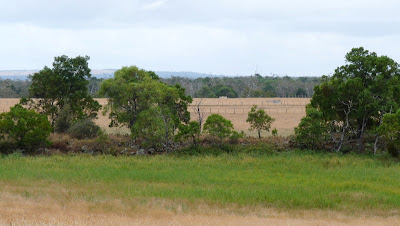 Email ThisBlogThis!Share to TwitterShare to FacebookShare to Pinterest
Labels: Homerton, The Stones

A chance to read

Inclement weather? No worries. It's an opportunity to put a dent in my holiday reading pile.

Apart from the usual who dunnits I have with me a few recent journals that I have yet to catalogue for the Field Nat's library (there are a few perks to being their librarian!). And they have been an absorbing lot this month. Here's a sample. See if you can lay your hands on one or two.

Wingspan is excellent as usual but I loved reading about the individual kids who are birdwatchers even though none of their friends are.

Parkwatch has some very well-written and thought-provoking articles about Victoria's national parks.

Growing Australian is about growing Australian plants but usually has a strong conservation aspect as well. This issue has an interesting article about a plant survey at the 'neglected' Maam Water Reserve near Warrnambool.

The Victorian Naturalist is a special issue that publishes the papers presented at the 2010 FNCV Biodiversity Symposium. Presenters were asked to compare wildlife in Melbourne today with that described at the turn of the century (1900) by Spencer in The Handbook of Melbourne. Topics include reptiles, frogs, plants, marine molluscs, terrestrial invertebrates, birds, mammals and fungi.
Posted by Boobook on Monday, January 09, 2012 3 comments: