In Canberra yesterday we shared a table with two strangers, and got chatting as you do. It turns out that both have lived in Canberra for decades, and agreed with us that it is a fantastic city. And then added "except that there are too many public servants".

We shared with them some of the amazing  places we had visited in the past few days, including the War Memorial. To our astonishment they said they'd never been there!

At the memorial we looked at a lot of the amazing displays, found the names of relatives on the wall because they died in service, looked at the special exhibitions and looked at a sound and light show. Had lunch in the Landing Place Cafe.

I was moved by a simple item in the display about Australian prisoners of war in Europe in WW2. It is a page of mounted pressed flowers that Private AJ Stone picked while marching as a prisoner of war in Greece and Austria.

There is a tiny plant that pops up every year in infertile grey sands, an annual called Millotia tenuifolia var. tenuifolia. It's common name is Soft Millotia and, yes, it looks soft and is soft to the touch.

Soft Millotia only grows to about 10 cm at most, flowers late winter and early spring and has pale yellow flowers and grey foliage so it can be easily overlooked amongst the other annual forbs and grasses. I've found it growing at Inverleigh, the Brisbane Ranges and at Anglesea. Sometimes it is prolific but still hardly noticeable.

All of the Millotia species are endemic - they only grow in Australia.  It is in the Asteraceae family named after a French historian named Millot for reasons unknown (to me). Tenuifolia means 'thin leaves' (Latin: tenuis + folium).

From a distance the Millotia tenuifolia plants can look very grey, mainly because they are covered in white or pale golden woolly hairs that are glandular. I often see grains of sand caught on the hairs. The linear leaves are crowded at the base and then arranged alternately up the stem. The flower heads (about 10-40 flowers in each) are at the end of the stem.

Before long the delightful little plants will shrivel and the seeds will be just blowing in the wind.
Posted by Boobook on Sunday, October 15, 2017 No comments:

You say tomayto, I say tomahto...

There's a little plant called Schoenus apogon. (At the moment that is. It's had other botanical names since it was first described in the early 1800s.) Schoenus comes from the Greek word for reed or rush and apogon means 'without a beard'. (I still don't know where the beard would be if it had one.)

A search of various pronunciation sites on the web revealed that Schoenus is pronounced 'shernus' or 'skinus' or 'shonus'. So I'm going to keep calling it shonus unless Neville Walsh* tells me his version.

And the common names are confusing as well. It's called Common Bog-rush here in Victoria, but also Common Bog Rush, Fluke Bog-rush, Bog Club-rush and, because it also grows in New Zealand and Japan, who knows what else. That's why we use the scientific name. It's standard across the world. (Did you see how I used the word 'we' there? I'm a citizen scientist.)

If you want to see the Common Bog-rush flowering you need to get out there now (spring and summer) and look for a very small rush growing in a seasonally damp area. It's common so you have a good chance of finding some but they're easily overlooked and you've probably walked on one heaps of times because it looks like grass. Compare the size of the gum leaves in the photo above. It's an annual so that means it grows from seed each year.

The culms are terete and striated. To you and me that means the stems or stalks are circular (in cross-section) and striped or streaked. The sheaths around the flowering spikelets are dark red-brown and quite attractive really when you get down low to have a good look. The sheaths are shiny with glabrous margins. (That means they're smooth and free from hair so maybe that's the 'apogon' cleanshaven aspect.) 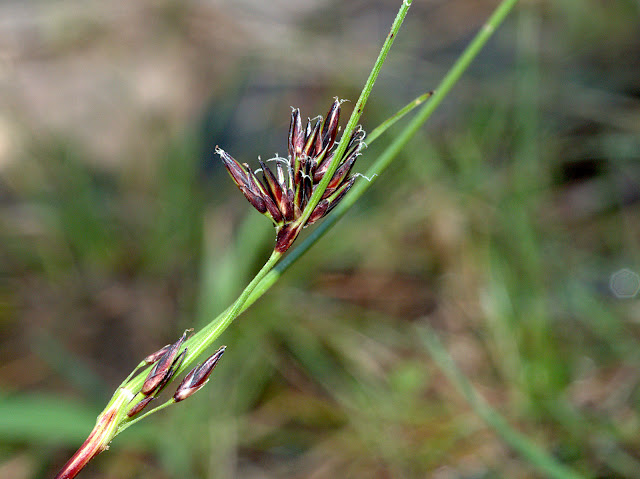 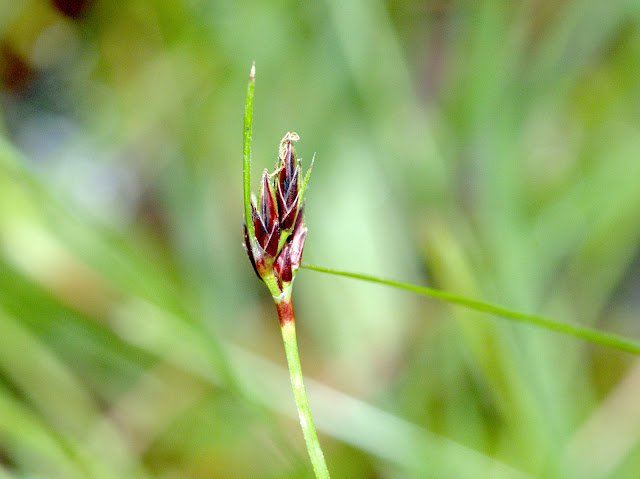 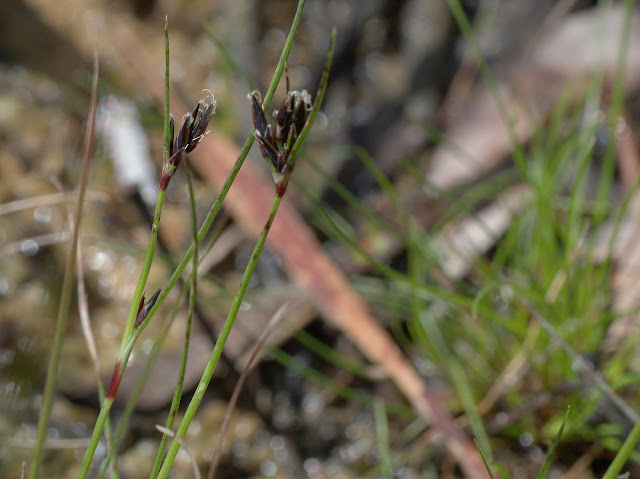 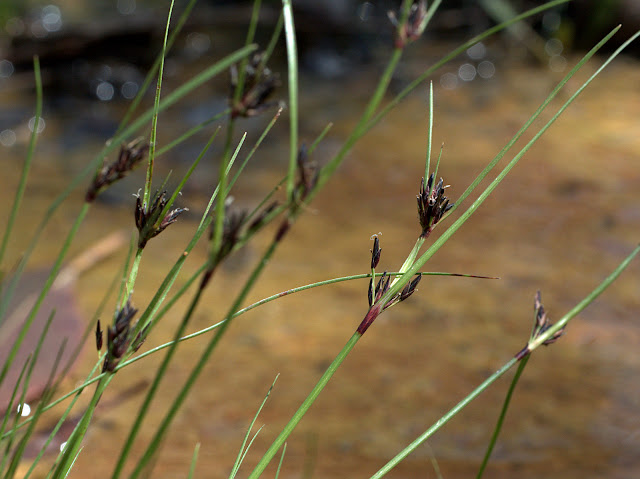 These plants were growing near Heywood in Western Victoria. I've identified them as Schoenus apogon but there are 19 other Schoenus species in Victoria so it's possible I'm wrong. I'm happy to be corrected.

* Click on photos to view large
** Neville Walsh is Senior Conservation Botanist at the Royal Botanic Gardens Victoria.
*** Schoenus plants are in the Cyperaceae Family
Posted by Boobook on Friday, October 06, 2017 No comments:

At this time of the year the Wax-lip Orchids are ubiquitous, seemingly flowering everywhere in the bush. I found this little group in the Brisbane Ranges today but they were scattered throughout the understory. After the first few minutes of delight I tend to ignore them because I'm looking for other plants or insects. I hardly ever photograph them but this is one I took several weeks ago.

But this one stopped me in my tracks. The white form is rarely seen.

Posted by Boobook on Wednesday, October 04, 2017 No comments:

For over a decade I've been taking photographs from a bridge over Darlot Creek in Homerton, Victoria.

It's been a very interesting project. The creek is never the same and has changed quite a bit over just that short period of time. It has never dried up because there are springs and swamps upstream, and it supports a suite of plants and animals that has interested scientists from time to time. And it has huge cultural connections to the local Gunditjmara people who call the creek Killara.

The photo, below, was taken ten years ago just after the bluegum plantation was established on what had previously been a paddock. Stock were able to graze right into the creek. Willows were a problem then and continue to be in this section of the creek. In a big Victorian Government study of the Glenelg-Hopkins catchments this was the finding:


Invasive willows were not a significant problem with the exception of reaches 38 and 39 on the Merri River in the Hopkins basin and reach 9 on Darlot Creek in the Portland basin where a number of willows were recorded. #


The next ten or twenty years will interesting because, at least in this section of the creek, the bluegum plantations mean that stock are not grazing along the west banks. The east side is not such an issue because it is part of an old rocky lava flow from Mount Eccles (Budj Bim).

I have been photographing this ephemeral swamp at Homerton for over ten years. My intention is to monitor changes after the paddock, that was previously grazed by cattle, was planted with bluegums.

At the moment is is full of water because it's been a wet winter and spring in western Victoria. This photo was taken in the summer of 2006 when it was a lot drier . I have previously blogged about changes in this swamp here.

The plantation is probably about due for its first harvest and then the bluegum trees will be allowed to regrow from the stumps for the next harvest in another ten years. I'm hoping that the reeds and rushes, as well as possibly trees like Blackwoods, Black Wattles and Swamp Gums, will grow around the swamp because they grow in another swamp less than 100 metres away but that's not happening yet.
Posted by Boobook on Sunday, October 01, 2017 No comments: