Fishing is a foreign place to me, but, for those who have 'the knowledge' Mallacoota is a major drawcard.

Pelicans and Silver Gulls know all about fishing as well. Or, at least, they know where fishermen clean their fish.

The gulls and terns at Shipwreck Creek were behaving more naturally, edging up and down the sand to keep their feet dry as each wave advanced. The creek, full of tannin, enters the sea at this delightful little sandy bay but it is named after the ship 'Schah' wrecked there in the 1837. The survivors of the wreck survived by walking north for five days along the coast to Twofold Bay at Eden!

Closer to Mallacoota we visited the astonishing Quarry Beach. The rocks here are 445 million years old, layers of different coloured sandstone now folded and faulted and eroded. It's a beautiful stretch of coastline that we will explore more thoroughly if we revisit this area. 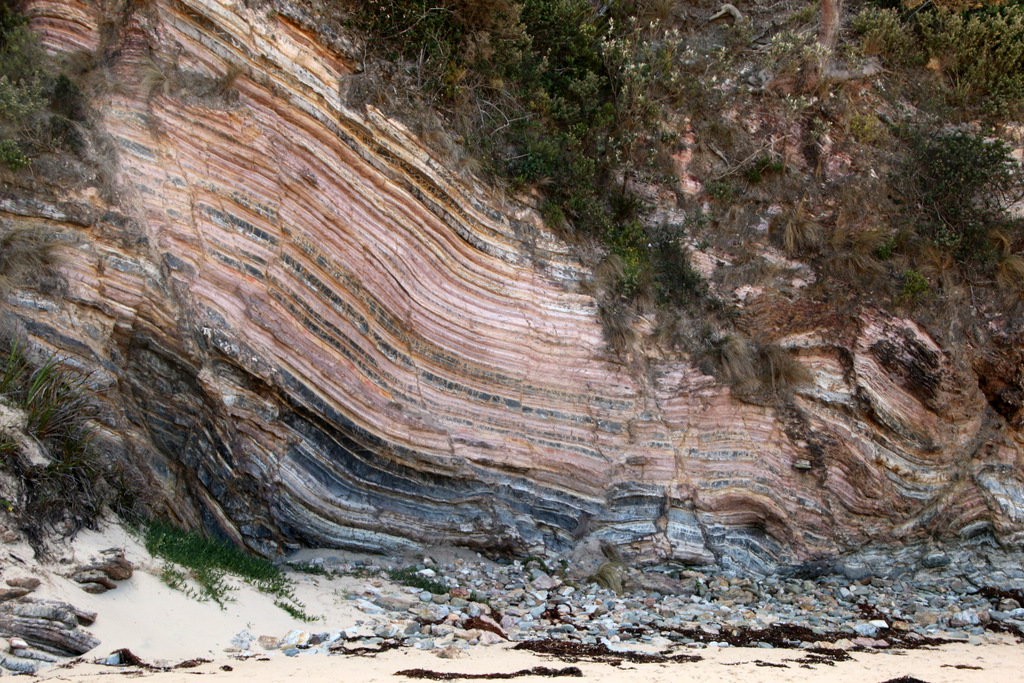 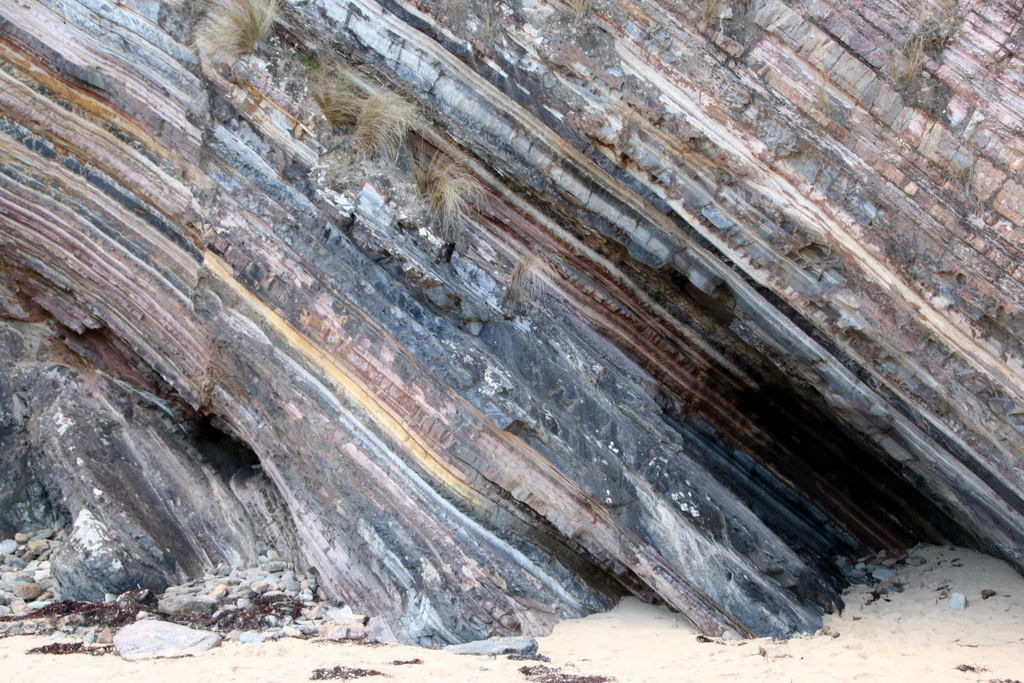 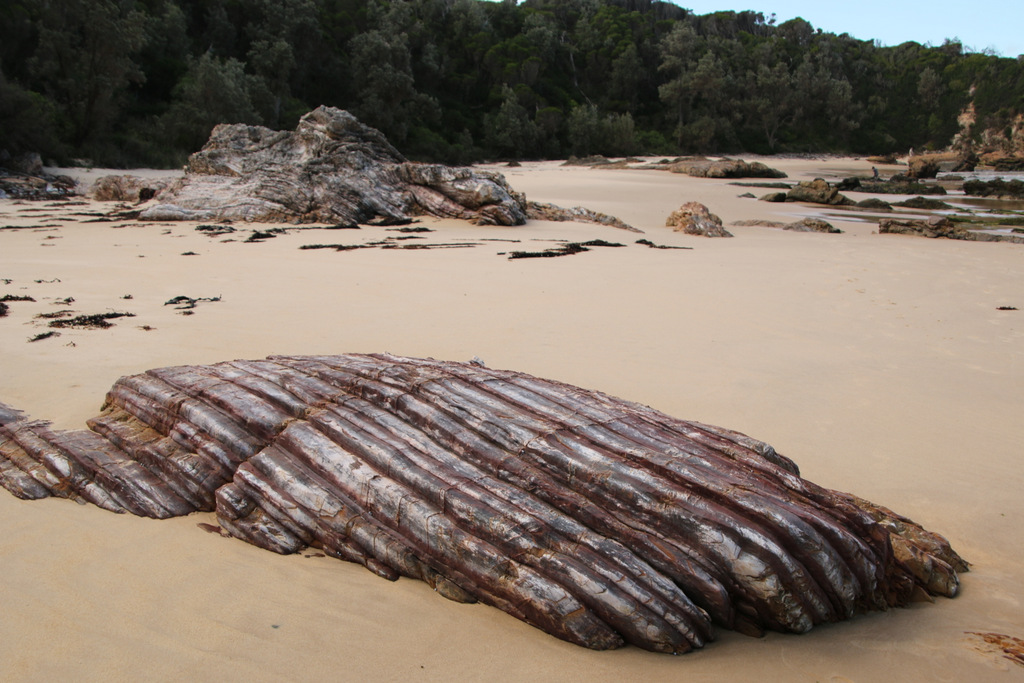 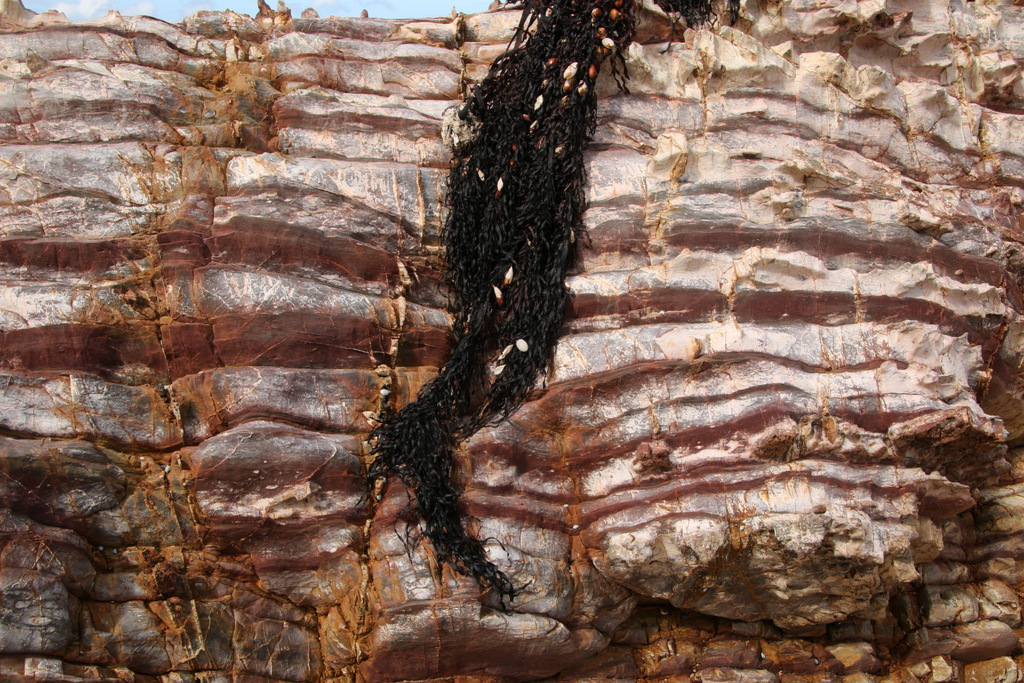 The wharf at Tathra is historic and tourists are drawn to it, especially now that it has been restored and a cafe established in the old wharf shed. After a number of years in the doldrums it has a new lease of life. Parking is in short supply and must be impossible in peak season but it's within walking distance of the beach and nearby streets. 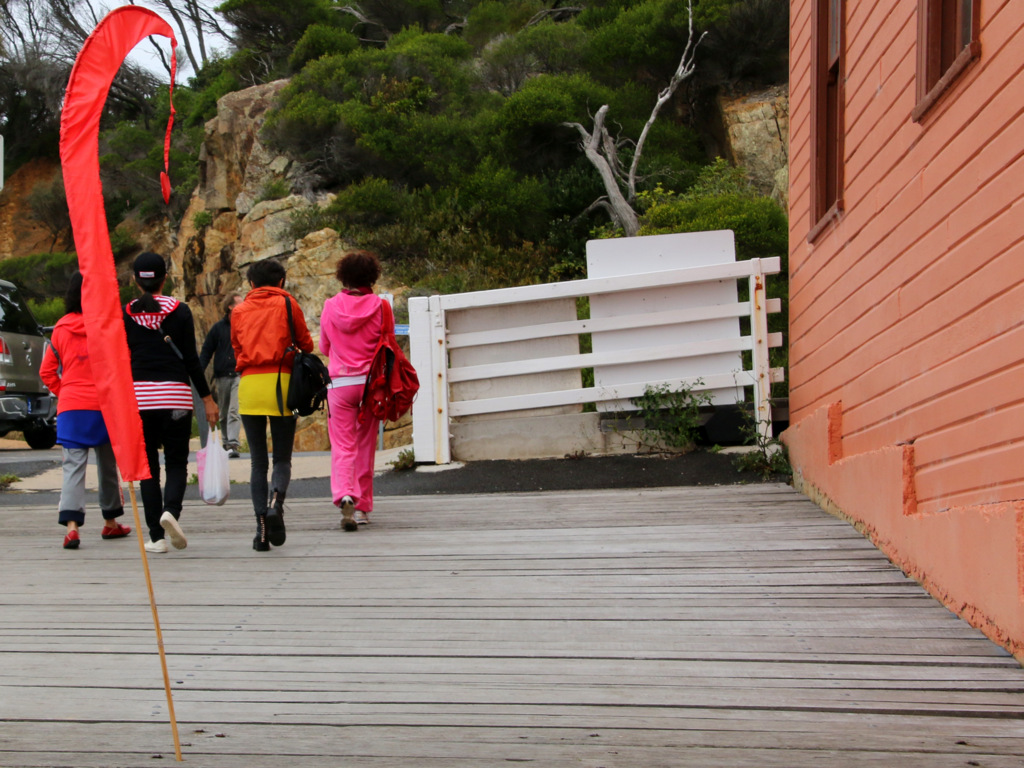 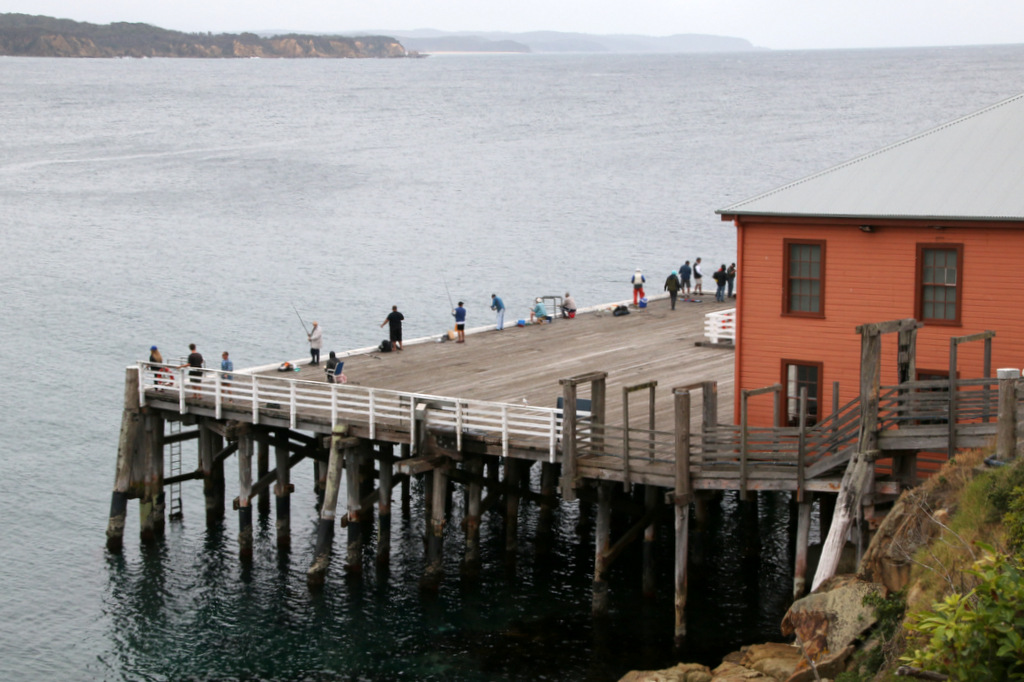 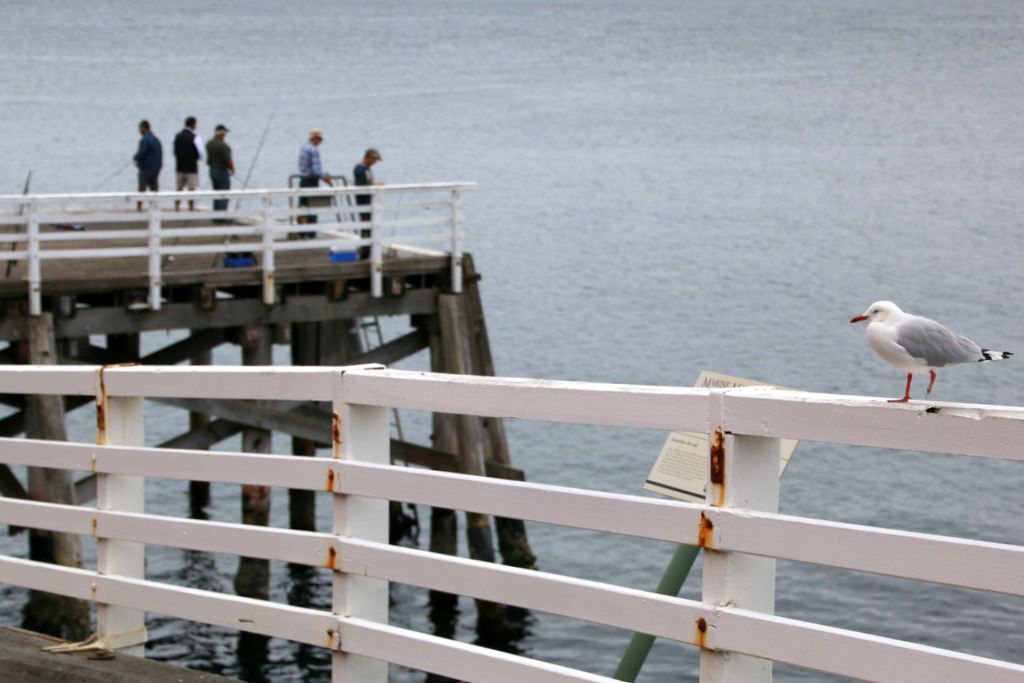 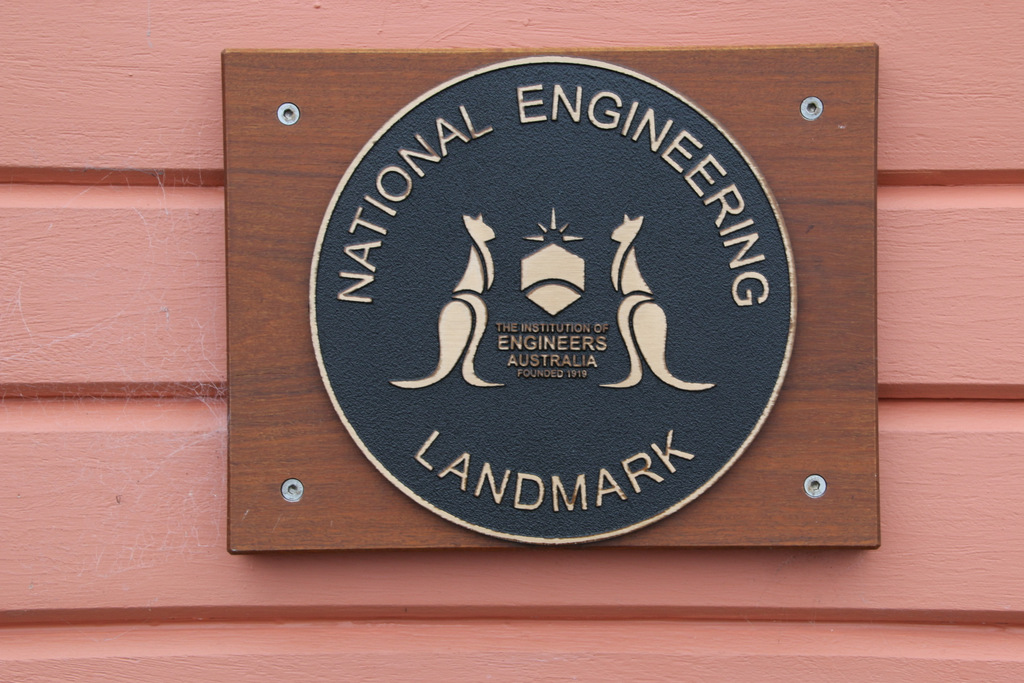 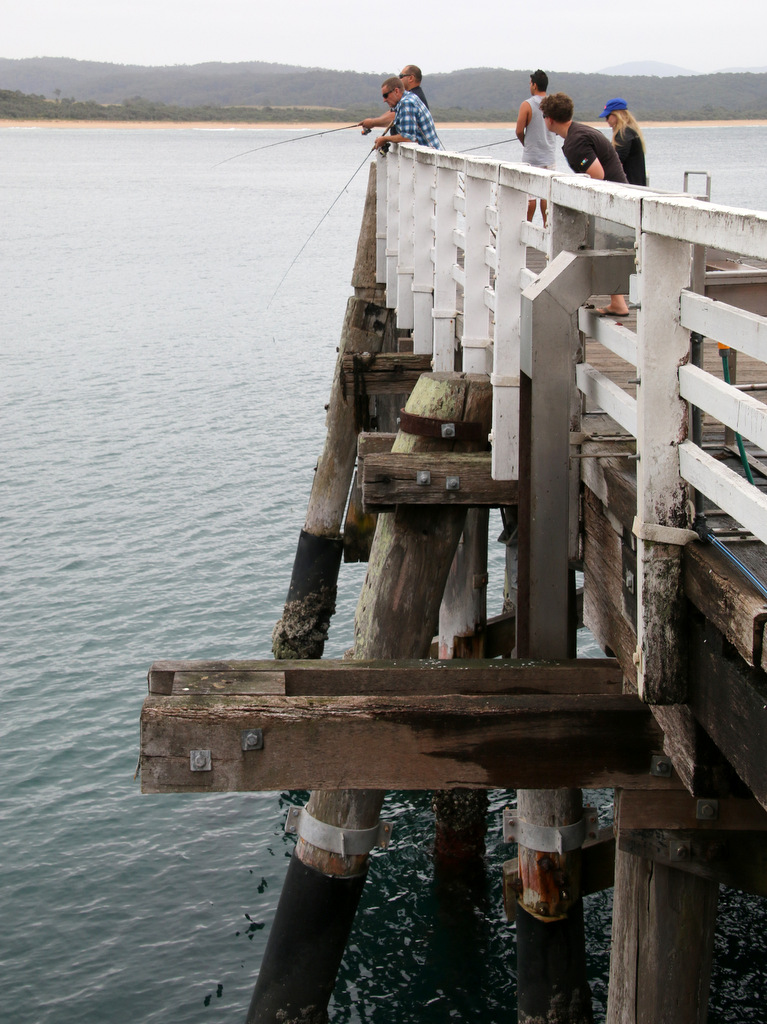 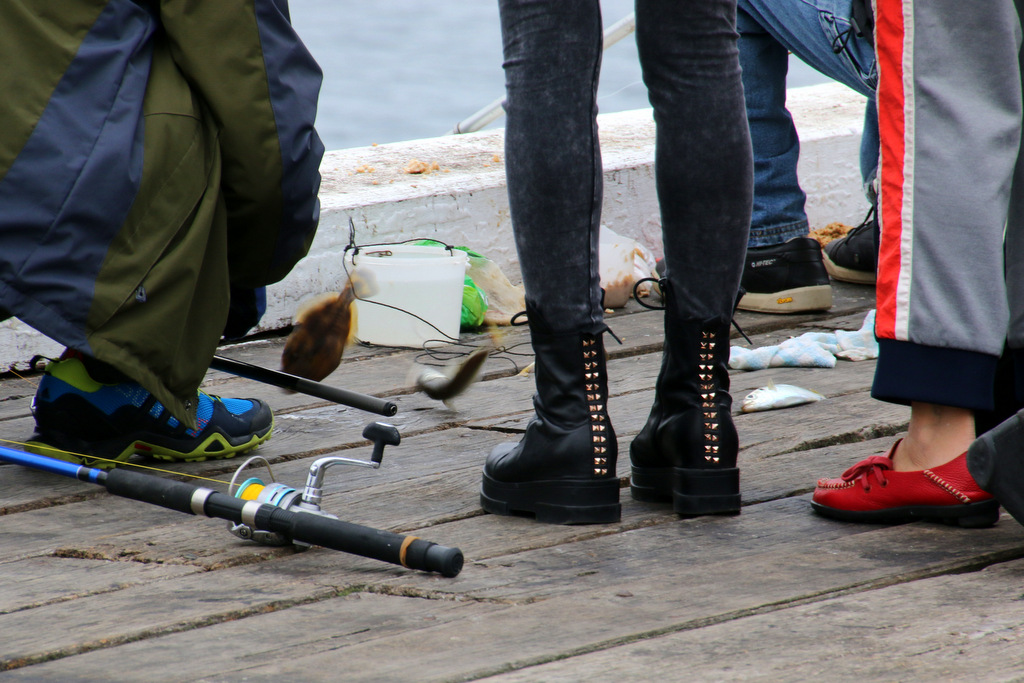 Spotted Gums trees may be the dominant trees in many forests in eastern Australia but not where I come from. So to my fresh eyes they are a stunningly beautiful addition to the already beautiful coastline environment north of Merimbula.

No two are alike - the spots and colours caused by the flaking bark are individual. The trees near the coastline have been shaped by the wind whereas those just a few kilometres inland stand tall and straight. We found these on a drive out to Nelson Beach. 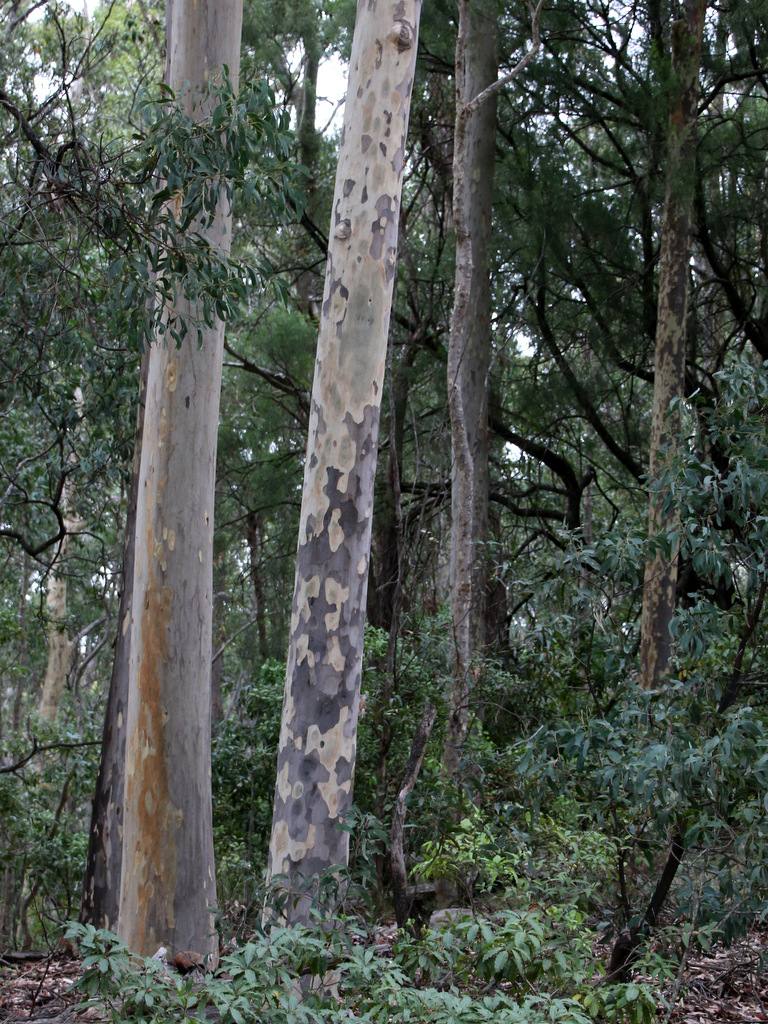 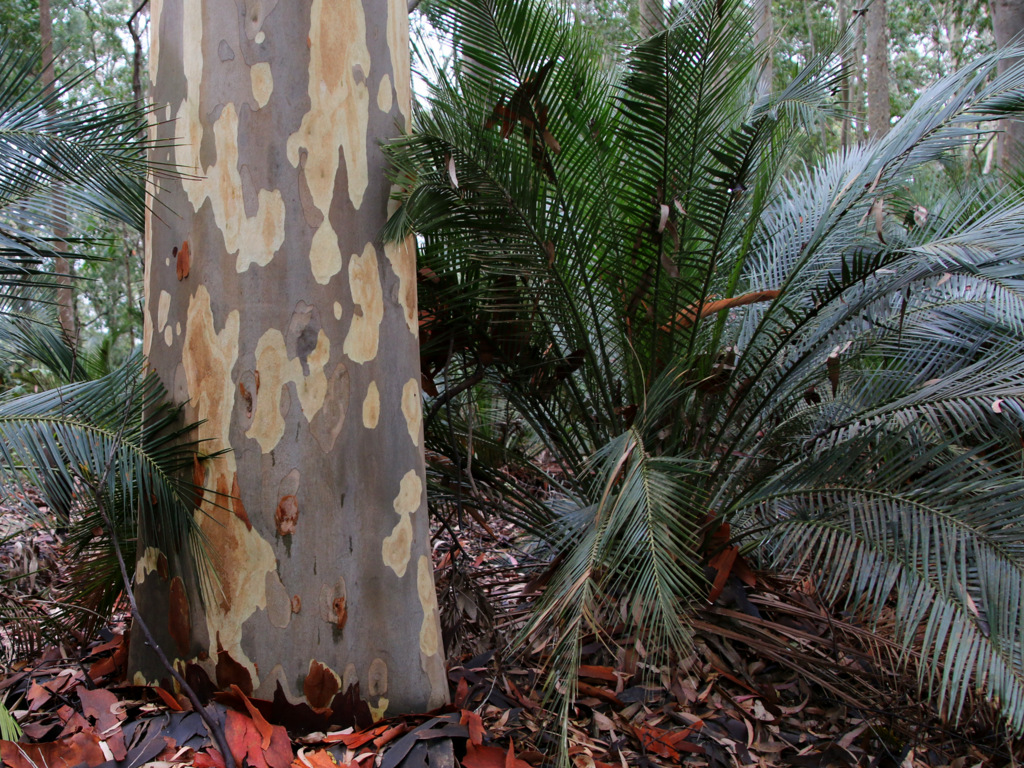 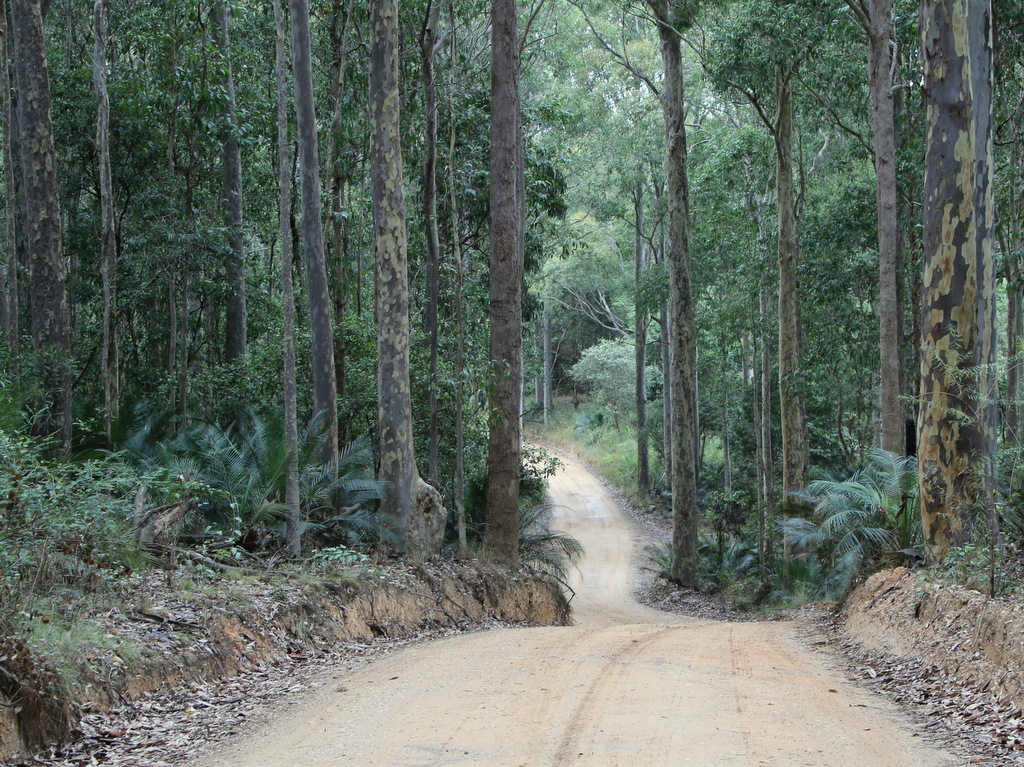 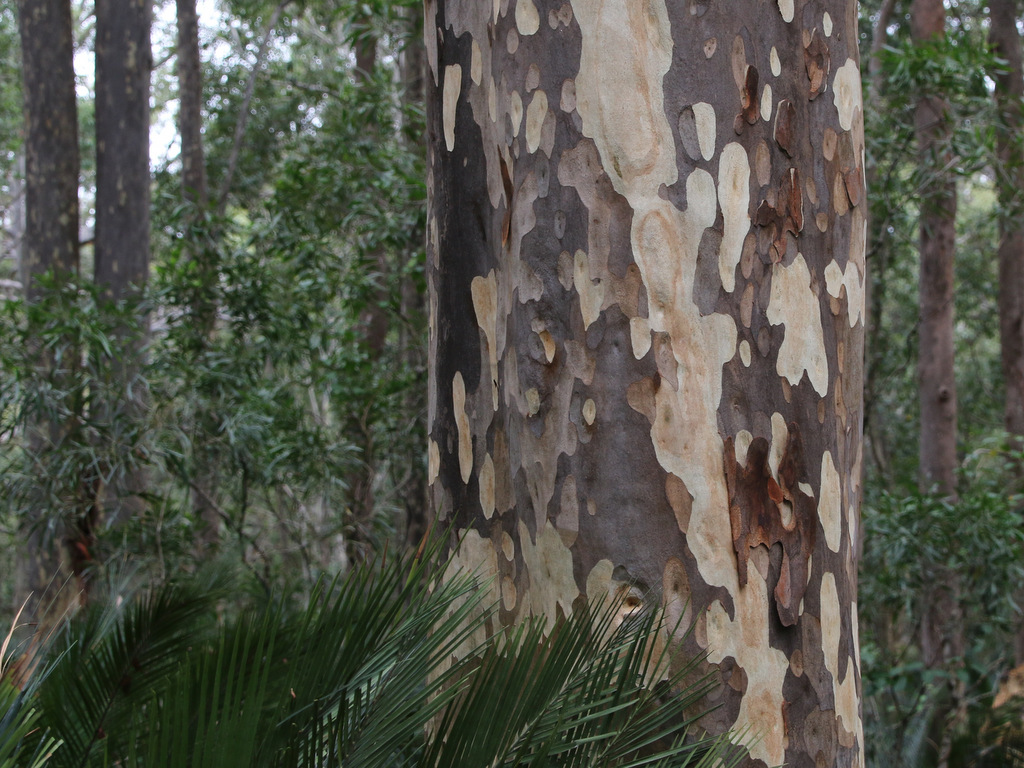 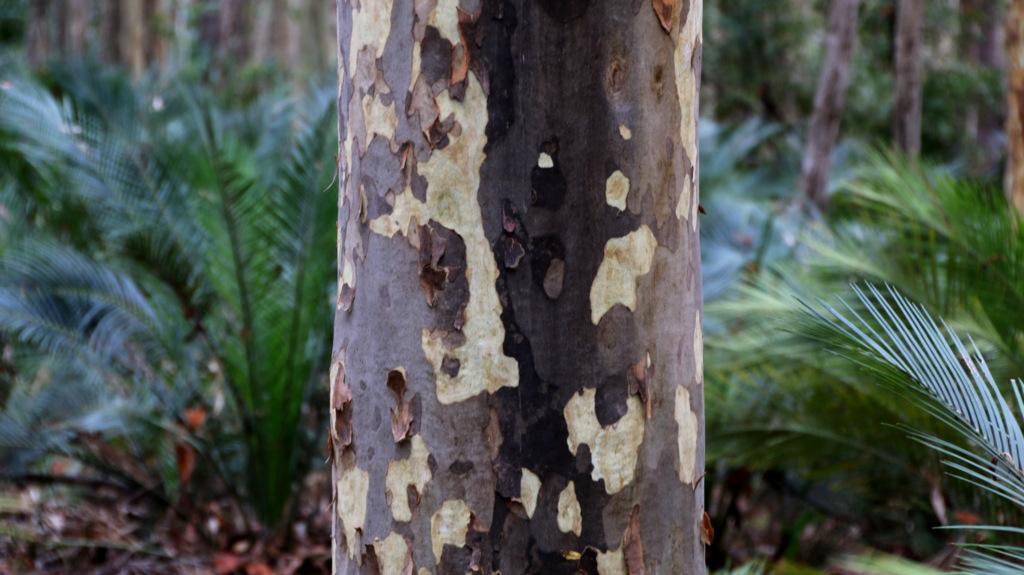 Nelson Beach and the beautiful Nelson Lagoon were well worth a visit - we spent quite a while exploring the vegetation, the headland and the lagoon. The Bellbirds, King Parrots, friarbirds and whipbirds were all calling constantly and a Sea Eagle checked us out before flying off over the lagoon. Again the geology defeated me. The rocks seem to be a real mixture of different eons. 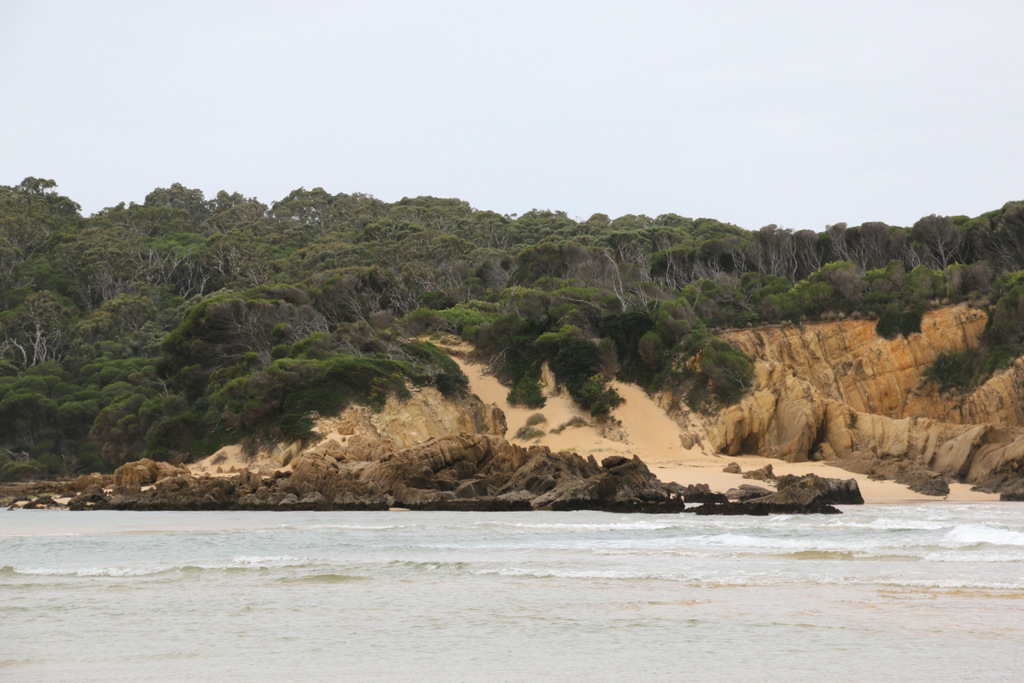 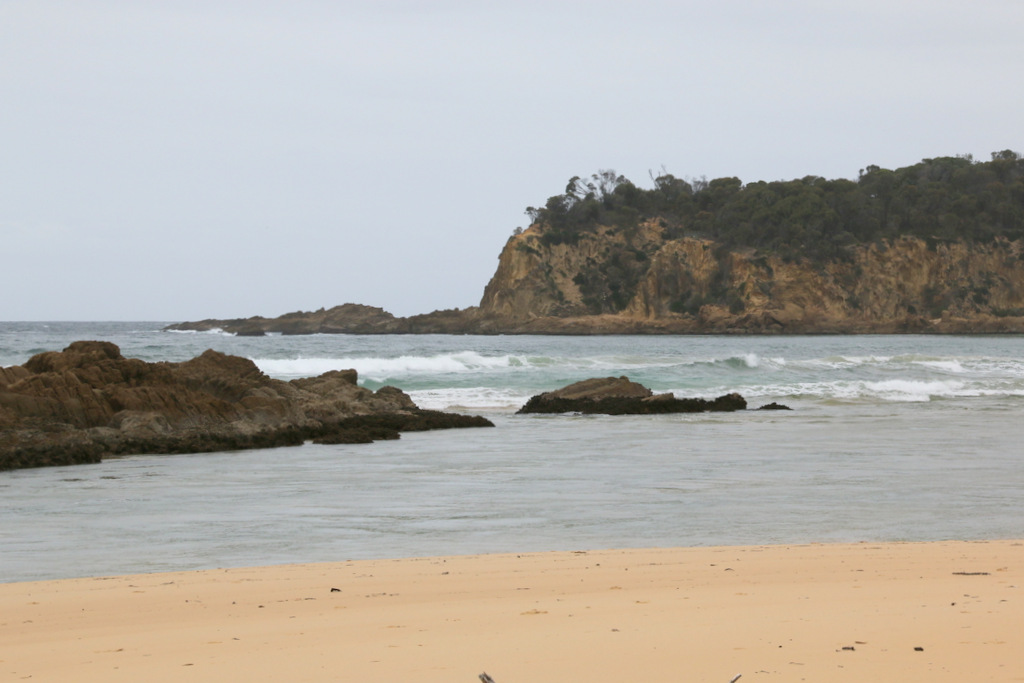 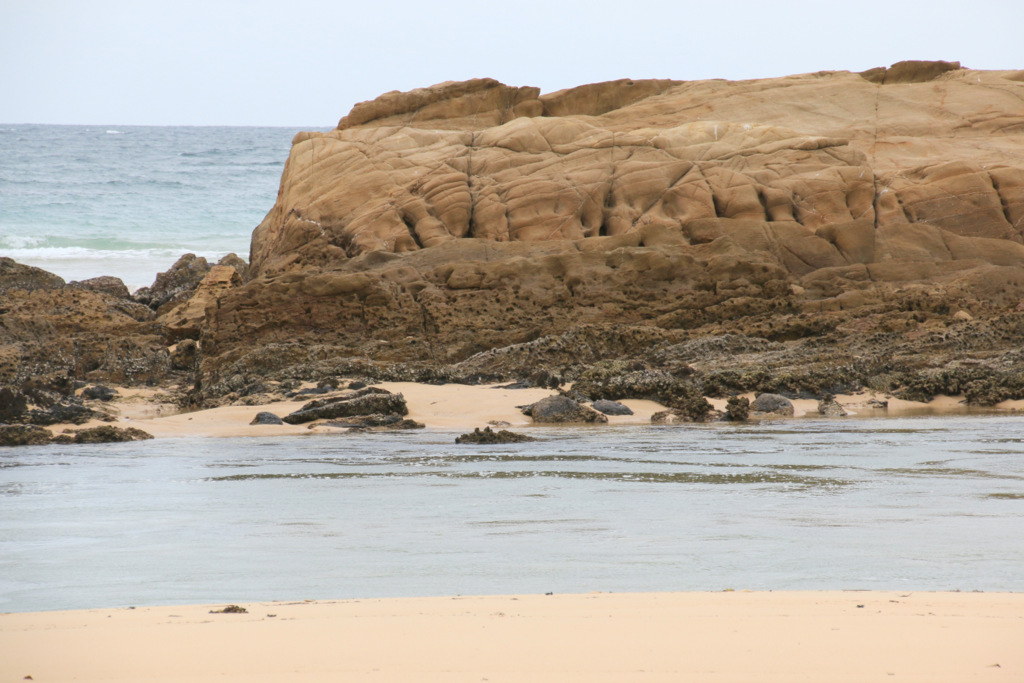 Perhaps by now you will have noticed that during our stay at Merimbula we didn't actually spend much time in Merimbula.
Posted by Boobook on Friday, March 20, 2015 No comments:

Each of the tidal inlets along the Sapphire Coast supports an oyster farm industry. I know nothing about the requirements for such an industry but presumably the water quality has to be pretty good. I don't actually eat oysters either.

We visited Picnic Point at Wapengo. To get there the road skirted the north shore of Wapengo Lake so we were able to see several oyster-industry sheds as well as the patterns of the farm structures in the waters of the inlet. The inlets are also lined with mangroves.

At Picnic Point the rocky headland is very pretty and the rock platform intricately patterned. It would be interesting to know what the geological history of the area is. Phil was very careful to stay away from the edge of the platform - he broke his arm last year when washed off his feet by a wave on a rock platform. 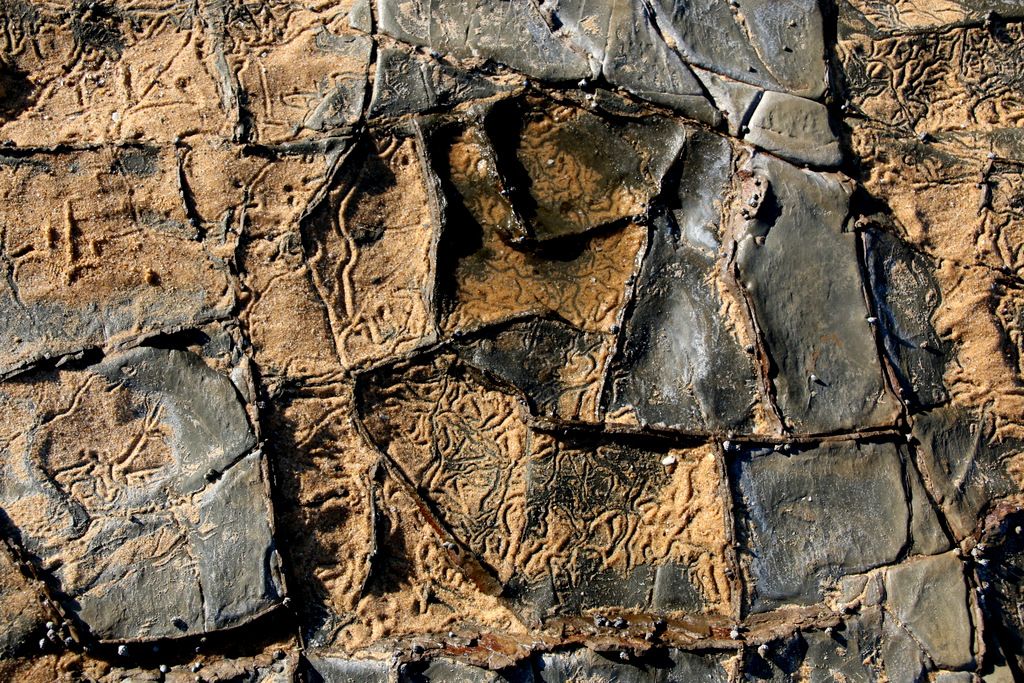 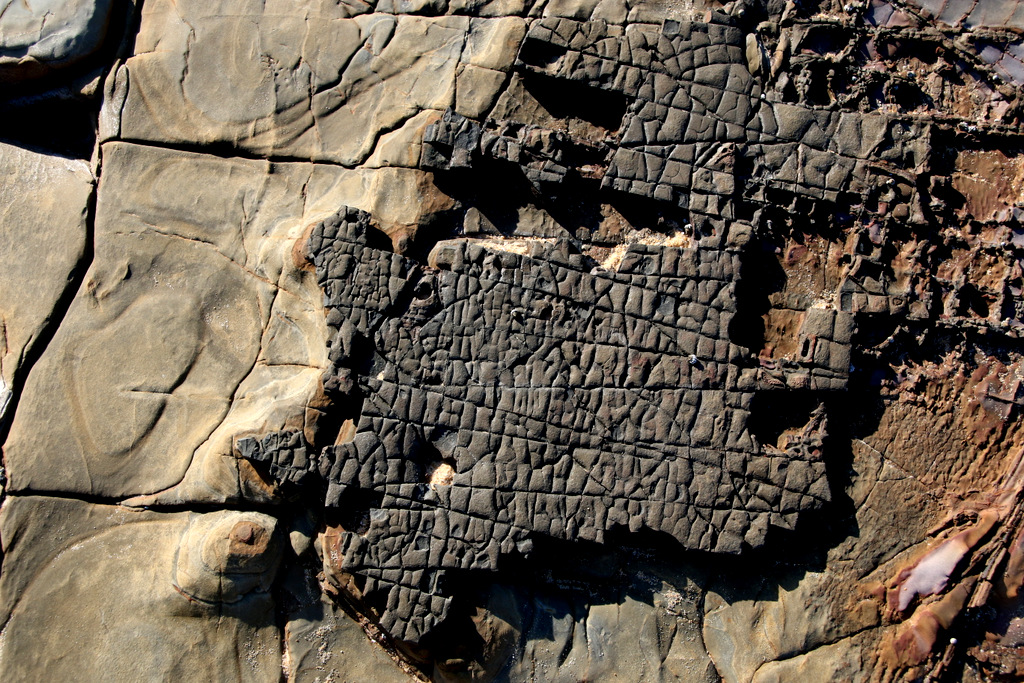 Bega Cheese Factory was disappointing because we couldn't see any of the actual cheese-making process like we have in several cheese factories in Tasmania but, on the plus side, the museum was interesting. So in the afternoon I was happy to leave the industrial to go and explore the natural on the Sapphire Coast of New South Wales.

Pick a spot, any spot. So we picked Mimosa Rocks. Good choice.

Mimosa Rocks National Park goes right to the sea. We drove to Mimosa Rocks on a dirt road through the dense bush and discovered that the banksia trees and other trees grow right to the edge of the beach. No low vegetation or heath at all. The beach at Mimosa Rocks is very rocky, with large round pebbles instead of sand on the 'beach' area and a small freshwater creek runs into the small bay. Aboriginals must have valued the area highly because there are very large middens beside the beach. 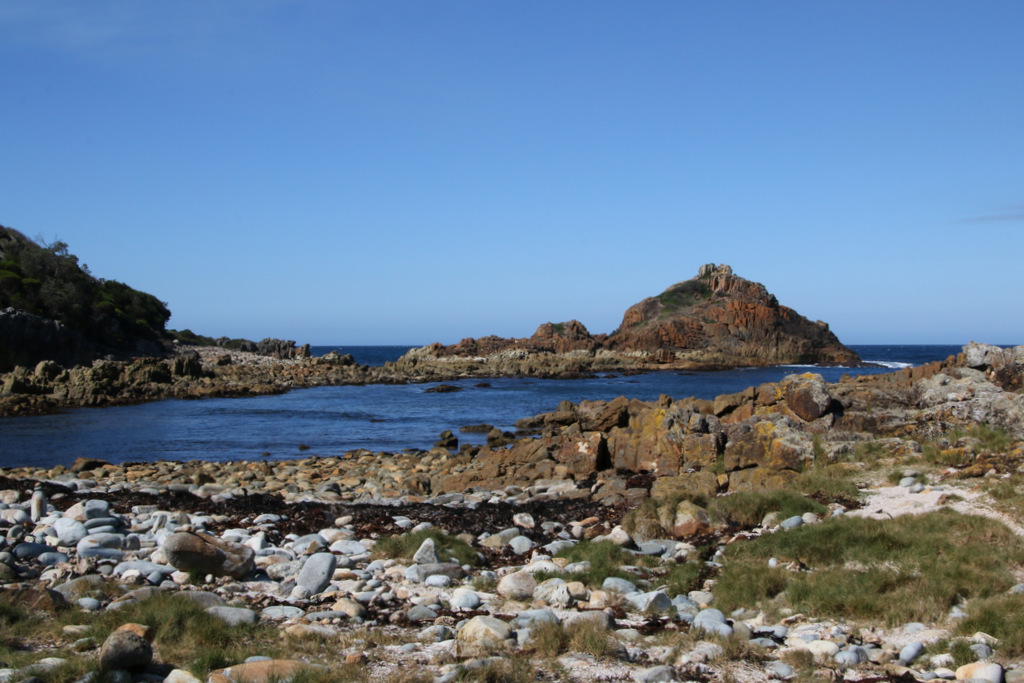 And just around the corner the beach is entirely different with no pebbles at all. Aragunna Beach and Mimosa Rocks both have small camping facilities and picnic tables but you wouldn't be able to get a large caravan in on the track.

From Jindabyne we drove to Willis on the Victorian border on the Barry Way. If we had continued we would have reached Buchan in Gippsland. The road is on the eastern side of the Great Dividing Range and follows the Snowy River on its way from Mt Kosciuszko to Marlo.

After the river was dammed at Jindabyne in 1967 for the Snow Mountains Hydro Electric Scheme the flow of the Snowy River was reduced to 1%. 1 per cent!! It wasn't until 2002 that agreement was reached to increase the flow to 22% for environmental reasons. We saw it in late summer and I wouldn't expect to see a great flow but it would have been nice to see another 75%. 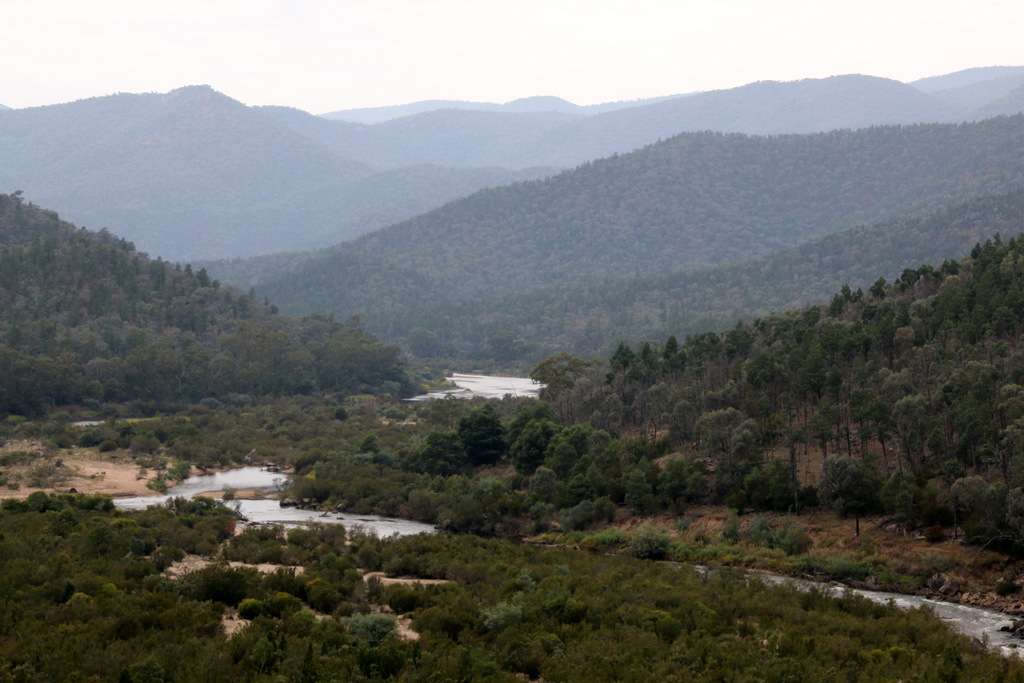 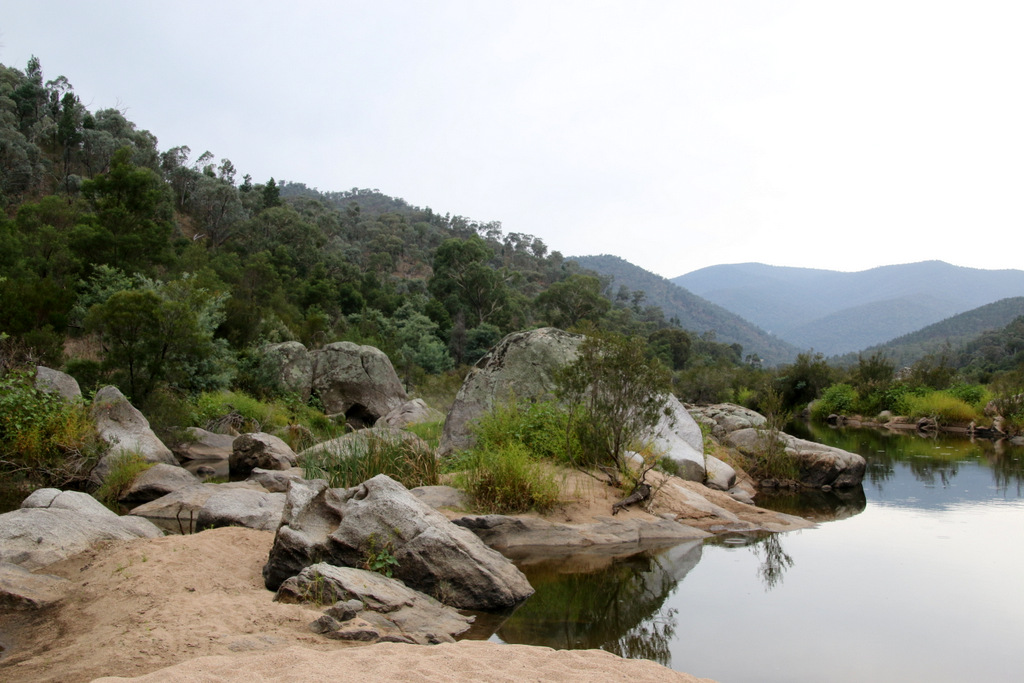 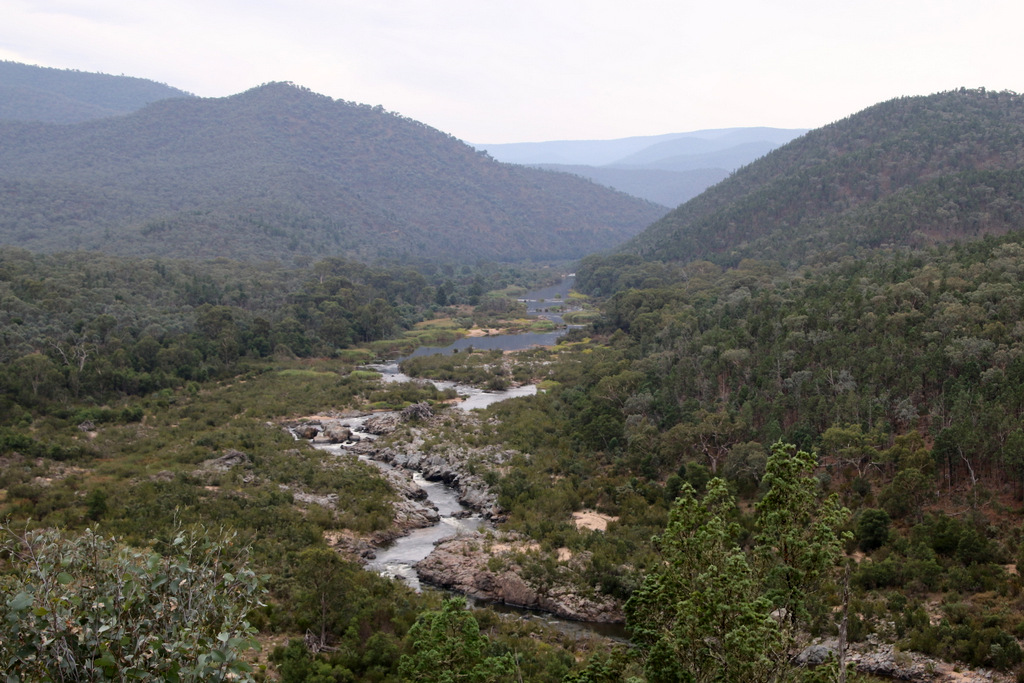 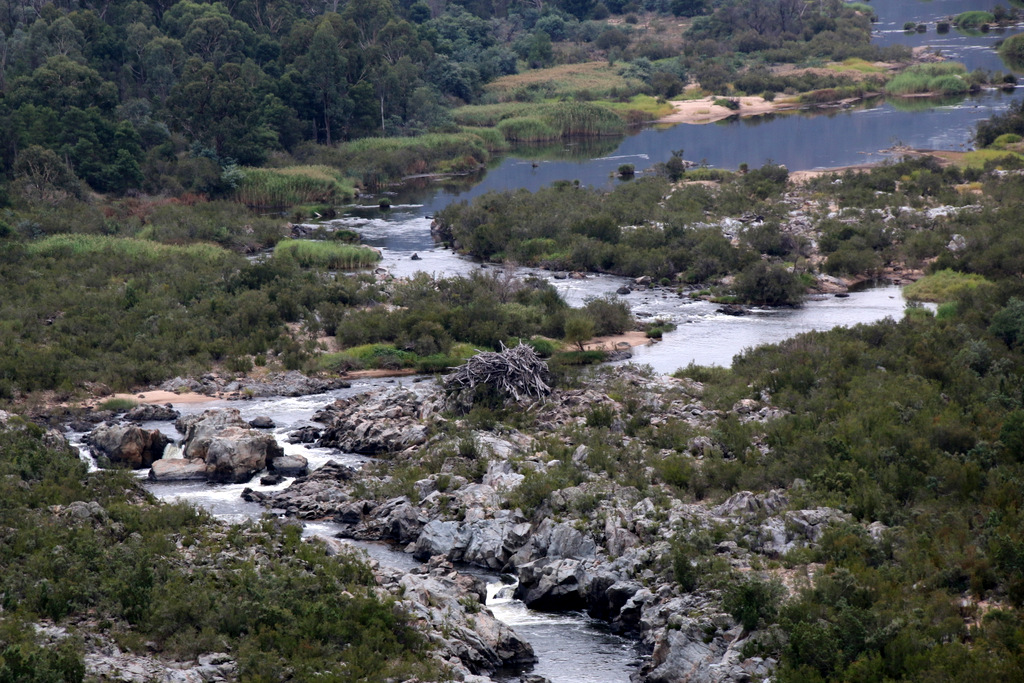 It was a surprise to me that the vegetation was so dry. Somehow I had been expecting ferns and tall eucalypts but what we saw was stunted and sparse vegetation that included Long-leaved Box Eucalyptus goniocalyx (the leaves are very, very long), White Box, sheoaks, White Cypress pines and Grasstrees Xanthorrhoea australis. A completely surprising vegetation community.

At the Victorian border we turned around. In earlier days the cattlemen camped here with their cattle on the way back from the high country to Gippsland. It is still a campsite but I wouldn't stay there - it is a weed infested area and smells strongly of horse. All down the Barry Way we saw horse droppings on the road and along the river's edge and we surmised that there are a lot of wild horses in the area.